What makes itch.io a little difficult at times is finding things that are interesting to play. Discovery is a real issue when great ideas are buried among high school projects and nasty little efforts to scam a quick buck from players. With that in mind, I thought what might be helpful to readers would be if I did a brief write-up of interesting games that I’ve come across on itch.io each week. In many cases these games will be unfinished or “in development,” but I’m highlighting them because they promise something special and are well worth keeping on the radar.Note: I also haven’t played these games. I highlight them as interesting based on the itch.io description and concept. Where I find the time to do actual reviews or other coverage, I will compose separate articles on the game in question. These aren’t so much an endorsement (or piece of criticism) as they are a head’s up.

I don’t expect you to understand just how pumped I am for VGA Golf, but I am really, really pumped for VGA Golf. See, as a child, I spent an unholy amount of time playing Microsoft Golf on my Windows 95 PC. I’m not even the world’s biggest fan of the real-world sport of golf, but the simple, challenging mechanics of that packaged-in PC title really held my attention. VGA Golf is a homage to the golf games of that era. 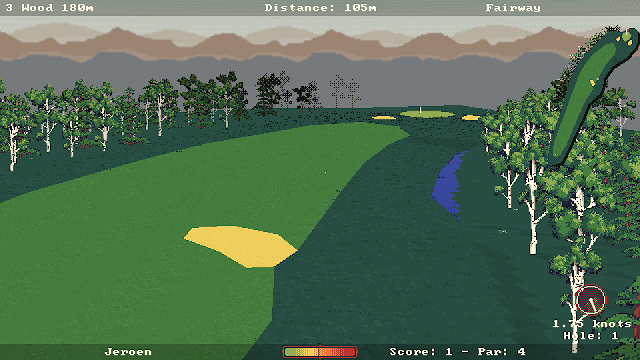 It is quite the comprehensive package to boot, with support for four players online, or 16 players offline (remember LAN parties? Yeah, relive those good ol’ days with this). Furthermore, the game has been released as open source, meaning that other players can create their own course, balls and props. That the developer is offering all of this at whatever price you’re willing to pay is all the more generous.

It has been quite some time since a tower defence title has been worth turning your head for, but Yokai Moon might just be the one to do it. The build currently available on itch.io is a demo (it’s free, naturally), but already the game looks like it’s in a great state, with some gorgeous pixel art and that ever-entertaining yokai theme.

This is one of those tower defence titles that have a day/night cycle. During the day you’re going to be preparing the fortress for the impending attack. You’ll need to collect food, buy equipment, prepare villagers for combat, and so on. Then at night the yokai attack and you need to fend them off. With 100 events, 20 different villagers, six enemy types, and 25 pieces of equipment, this is a game that already has some impressive scope, too.

Ambition: A Minuet In Power

You probably wouldn’t have ever thought that a game about being a fashionable socialite in 18th century Paris would make for a compelling game, but Ambition does look like the real deal. You need to amass wealth and respect, and you’ll do that using the full range of tools available to you: you’ll charm, date, gossip, and either alter the course of history or end up in the lineup for the guillotine. This is Paris on the way to revolution, and you need to be well aware that you have enemies and they’ll be scheming against you too.

We don’t have many games that deal with the subject of revolution-era France. There are plenty of games about Napoleon and what came after the revolution, of course, but efforts to depict the social and political dramas of the time are few and far between. This “revolutionary romance,” could well be something special, and it certainly has the quality art and production values behind it.

Abaddon: Princess of the Decay

The thing that immediately caught my eye with Abaddon was the aesthetic. It looks very much like the kind of aesthetic that you get from haunted houses in a fairground. Which is a great thing. There’s nothing quite like Z-grade horror. Then, as I read on, it seems to get better and better – it’s a turn-based RPG, it has a massive library of pixel art (and full-colour versions) to unlock (170, no less!), and there’s a stress system that can lead to permadeath!

The October issue of the Dee Dee Zine is now live… PLUS read one of the earlier magazines for free!