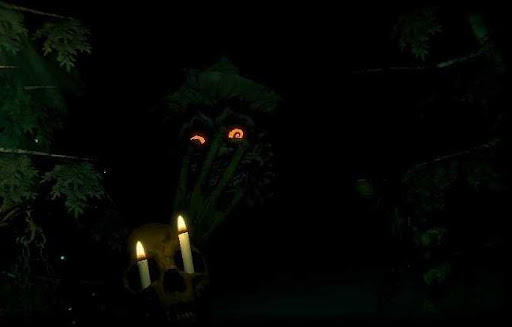 I’m surprised that more developers don’t take a systemic approach to horror – we get lots of games that lean away from game mechanics and skill-based interactions, but there’s a richness to be explored within the language of game systems too. Having played Shephy, I’m all too familiar with the kind of existential horror which can arise from an innocent-looking card game. So when hearing about the upcoming horror roguelite Inscryption by Daniel Mullins Games, developer of the unsettling Pony Island, I was cautiously excited.

Players start out sitting opposite an entity shrouded in darkness. They’re a dungeon master in the vein of games like in Hand of Fate, but this game seems to have higher stakes than your average round of cards. In your hand are cards featuring various animals which make nervous or pained expressions at you. Some require blood sacrifices to play. Each turn you can draw from a deck of your owned cards, or add a squirrel to your hand. Squirrels are free blood which are required to summon the more powerful attackers, like wolves or ravens. Ending your turn makes your animals attack your opponent, and the opponent gets to respond in kind.

The card game mechanics are most easily compared to something like Magic: the Gathering or Legends of Runeterra – each card has an attack and a health value, and cards can attack either your opponent’s creatures or your opponent directly. Various special features differentiate cards, such as flying over the opponent’s blocker, or evolving into a tougher animal after some time has passed. There are a few interesting twists on the formula, like the life-bar being a set of balancing scales, so the winner is always the one dealing comparatively more damage than the opponent, but ultimately the systems feel ordinary and familiar. 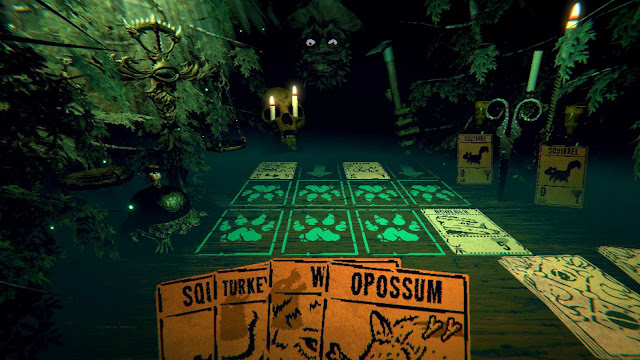 But card game shenanigans aren’t what we’re here for – if you wanted Inscryption to be as deep as Magic: the Gathering, you might as well play Magic: the Gathering instead. I find that the simplicity of the card game mechanics allows the game to effortlessly dip in and out of the artifice of the cards, creating strategic situations when required, and reaching across the table to threaten the player when not. At times when the cards grow unfavourable, the player might be asked to stand up and explore the room, at which point Inscryption turns into something more like an environmental puzzler. The demo leaves plenty of hooks to keep players guessing: a locked safe, an empty picture frame, a barred door that seems to have blinding light behind it.

The theming of the cards are also top-notch. The animals you come across feel alive in their art, with some even talking to you. You’ll be constantly sacrificing them and putting them in danger in an attempt to spare your own life against more powerful adversaries. The rogue-lite elements play out very similarly to Slay the Spire, where the player must advance forward but can choose between forking paths – some which reward the player with additional cards for their deck, others which might augment the cards they already have.

And at the end of the map comes the boss encounter, when the dungeon master puts on a mask and takes on the persona of a twisted figure that utterly breaks the rules of the game. I imagine these encounters will feel more like puzzles that have to be planned around – you’d want to pick up cards for your deck that effectively counter the strategies that the upcoming boss will pose. 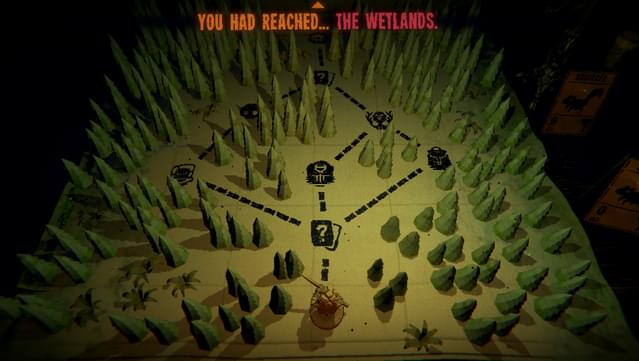 The conceit of playing a trading card game to save your soul might seem a bit gimmicky at first, but Inscryption’s writing and atmosphere absolutely sell the player on a consistently spooky time. The deck building mechanics complement the narrative’s ideas of risk and sacrifice really well, and the whole experience feels immersive and natural. Inscryption feels like it’ll be a much more ambitious game compared to the developer’s earlier titles, providing a varied adventure with lasting consequences that will provoke thought rather than settling for cheap jump scares. Even in the demo, there are unassuming details that, if you think about them more deeply, are pretty brutal. Don’t underestimate how quickly and effectively Inscryption’s simple card tricks can get under your skin.