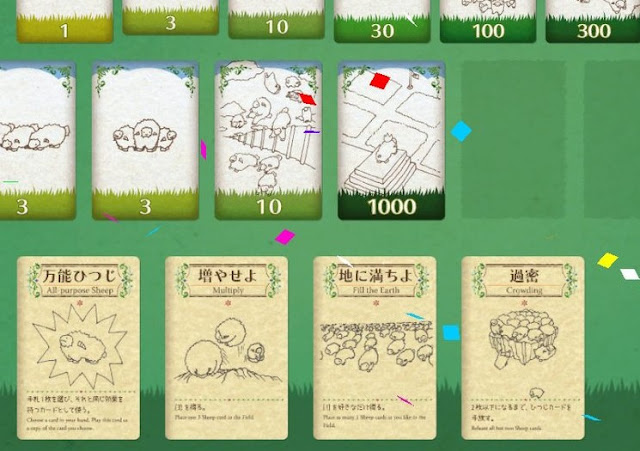 Shephy is a simple Japanese card game designed by indie artist Pawn and developed by Arc System Works. It features some very cute artwork and comes at a low price point, so I’m mostly writing this review to warn you that looks can be deceiving and this game is going to break you. Shephy is a solitaire-variant, pitting one person’s skill against the random chance of a deck, and Pawn uses this as an allegory for the cruelty and absurdity of nature. I picked it up thinking it’ll be a relaxing way to end the day and ended up playing round after round like a savant, because sheep are lovely creatures who don’t deserve to die like this.

I’ll explain. The game is played with 72 cards – seven classes of sheep (rated from 1, 3 and 10 all the way up to 1000), 22 event cards shuffled into a deck and an enemy sheep card, which ticks down to impending doom. You start the game with one lonely, one-point sheep card and six empty pastures, as well as five event cards in your hand. It’s your job to use event cards, duplication and multiplication to turn your single, lonely sheep into an army of 1000, and do so within four rotations of the event deck. To hinder your progress, half of the event cards represent negative effects that force you to kill sheep – so before you can reshuffle the deck and get back the good cards you’ve used already, you will need to inflict your sheep with plagues, lightning strikes and wolf attacks until you’ve used every card in your hand. There’s even a grim-reaper styled card called Shepion, which might as well read “when you play this card, kill all your sheep and lose the game.” It’s an instant-fail grim reaper card, so you’ll need to save one of your two precious “defence” cards, which can save you from having to use one bad card, to deal with this fellow.

This is all well and good, but it’s surprising how hard the game is on your first few attempts. It’s easy to lock yourself into killing all your sheep accidentally because you left the negative cards until last. The 4-round time limit is also quite strict, so it’s a triumph when you finally manage to reach that coveted 1000 for the first time and “win” the game. The game is well balanced so that you’ll definitely need some skill to succeed, and it surpasses solitaire in that regard. In fact – and this is very high praise – it almost achieves the simple replayability of something like 2048. 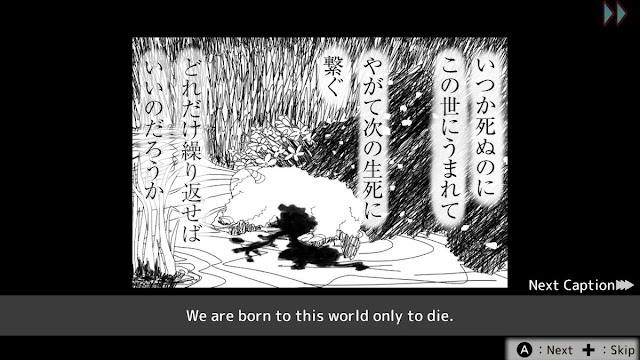 Over time however, the game’s reliance on randomisation starts to hold it back. It’s easy to break the game by figuring out which cards are best played in conjunction with each other, after which point you’ll spend lots of time restarting until you get the perfect opening hand. As with Vegas-style solitaire, some iterations of the deck are completely unwinnable. On a winnable iteration, you can also lock yourself out of victory due to consequences that you couldn’t ever have predicted. This is where the game starts being cruel.

So there’s additional content in the form of a story mode called Post Loves, which is distressingly sad. In fact, it will give you a literal existentialist crisis if you think about it too much. It’s filled with death, whether from disease or starvation or self-sacrifice, and with each additional stage you’re forced to contend with more difficult win conditions that represent the plight your sheep go through. The story is way out of left field considering the game’s cutesy aesthetic, but it had me hooked: I was horrified but I had to find out what happened next. Unfortunately, the win conditions in Post Loves really start to highlight the importance of random chance, especially when you’re on track to make 1000 and an unlucky draw wipes half your pastures. It’s a classic “bad-things-happen-to-good-people” narrative which had me worn down by the end.

Shephy is mechanically sound and intrinsically fun, but it’s also a harrowing experience if you think about it hard enough. I can’t tell if Pawn intended the game to be darkly humorous or outright desolate, but either way the grim story both tempered my enjoyment and drove me to play more. It’s an emotion that I’ve rarely experienced from a game, and that itself lends Shephy merit beyond the extent that the randomisation within the game actually hurts it. I can think of worse ways to spend an afternoon or two of play, but you’re going to need to be a little twisted to properly appreciate this one.