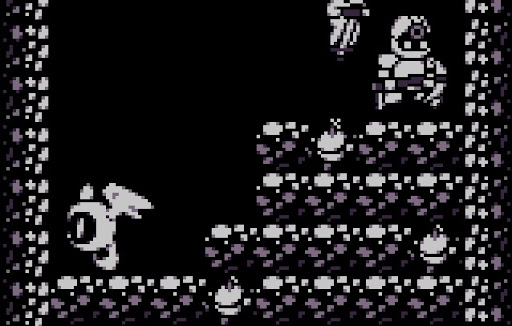 We have a bit of a themed edition of the Interesting Games feature this week – all four games are modern Game Boy or GBC titles! There is a new original Game Boy game jam going on right now – GBJAM 9, and has created a flurry of activity with people coming up with new old games to play. First up we have K32 Super Rocket. K32 Super Rocket is a Game Boy Color side-scrolling shooter, with a colourfully childish aesthetic that features eight levels, crammed into just 32kb of space. The game features a health bar and a fuel bar, music of its own, and even more impressively, it was all built in assembly. I know I’ve seen this before, but one of the appealing things about these “new old” projects is seeing how developers challenge themselves via limitations, and this developer has gone all the way to actually make these games as they were once made. No short-cut tools here!
Mud Warriors
Mud Warriors is a Game Boy Color adaption of Ryan Veeder’s Mud Warriors text adventure game. That means it’s the Game Boy equivalent of a point-and-click adventure, and what stands out about this one is the rather lively use of visuals giving the technical limitations that the developer is working with. Just looking at this in motion has me getting warmly nostalgic for the games I used to play a lot of back in the day.

As the Itch.io game listing goes “we used to play games every day after school. But I’m a big kid now. I don’t play games anymore.” Having not played the original text adventure (which you can play here), I can’t add anything to that, but it seems like this is a lightly comedic adventure and something that offers up a bit of nostalgia for youth.

Glory Hunters seems to be incredibly ambitious as a Game Boy project, so much so that I had to double-check that the game was playable on Game Boy devices, which it absolutely is. It’s still in an early state (the version for download is 0.1), but the potential is massive – an open world, 200 achievements, and a pretty unique concept. 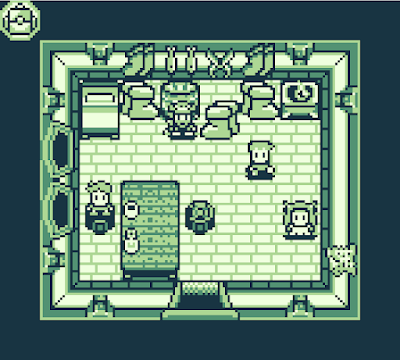 In Glory Hunters, you’re on the hunt for “glory points” which you earn by completing quests and earning those aforementioned achievements. You can use those points to upgrade health, buy items, and hire assistants for the quest. You’ll also need to gather materials and help the townsfolk around, as you also attempt to save the land by awakening a slumbering deity and delving deeply into monster-filled dungeons. This is absolutely a game I would have jumped on were it released back on the game boy, and I’m looking forward to giving this one a whirl too. Hopefully, the developer gets the encouragement they need to finish work on this chapter and continue to work on more.

Until The Light Comes

If Game Boy games were being made in 2021, I think we’d get a lot of stuff like Until The Light Comes. This is a procedural platformer (procedural games weren’t that common back when the Game Boy was new), and it makes such a lot of sense given the limitations of the console. 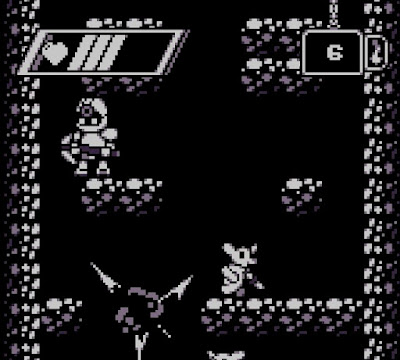 The game has an aesthetic that is vaguely Metroid-like, but the gameplay is significantly different. In Until The Light Comes, you need to avoid bomb traps and swing your package like a weapon – yep, you’re a miner in this game, with the goal being to travel as far through a deadly, monster-packed cave before finally succumbing… and then you get to try it again. There’s probably a hint of Downwell in there too. It might not be the most original idea, but making it work on the Game Boy is pretty damned impressive.