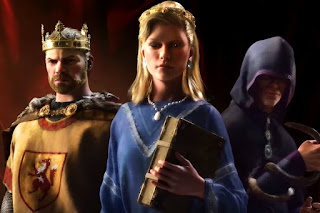 The hawk eyes over at Gematsu have noticed something very interesting indeed: The Paradox Interactive strategy title, Crusader Kings III, has been rated for a release on PlayStation 5, Xbox Series and Xbox One. This is no guarantee of a release or a formal announcement, but it’s certainly a good sign.

You just have to wonder how this is even possible, though. Crusader Kings III is an absolutely incredible game, but even more than some other 4Xes (Civilization, for example), it’s a very console un-friendly game. Or, at least, you would have thought so. I can’t imagine being able to play this with anything but a mouse and keyboard.

With that being said, I’m also 100 per cent confident that Paradox knows what it is doing and wouldn’t make a port of one of its most valuable properties if the port didn’t play well. So, colour me interested. If this game does launch on PlayStation 5, I will be there on day one for sure.