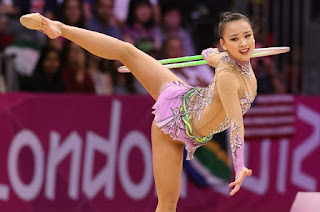 There was an interesting article that was published over at The Gamer earlier this week, and it’s the kind of thing that got me thinking about video games at a more conceptual level. The piece is titled “Where Is The Video Game?”, and it’s largely a drill down into the question about what we notice in video games – whether it’s the coding itself, or rather the creative and design elements that the coders are tasked with pulling into the game (also stay with me, the image of the rhythmic gymnast will be clear by the end of the article here, I promise).

“Programming is far from obsolete, but it’s increasingly less important when starting out,” the writer, Kirk McKeand, writes. “I also believe that it’s in the implementation where games shine.

“What are the things you remember most fondly from your favourite games? In The Witcher 3, is it the dialogue system, or is it the content of the conversations you had? In Red Dead Redemption 2, did you care about the world clock, or did you care about the restaurant being built near Valentine over time, progressing as you made your way through the game?

“In the original Deus Ex, there’s a guard. If you’re a stealthy player, you might slip past them. However, if you decide to kill them, you’ll find a packed lunch on their corpse and a note from their child – “I hope you enjoyed the PB&J sandwiches, dad.” A programmer made the inventory system, allowing you to look through their belongings, but a designer would have placed the objects on the guard. It’s not the act of going into the inventory that you remember – it’s the story it tells. When this happened to me many years ago, I reloaded the game. I couldn’t live with my choice. The implementation is powerful.”

I agree with the crux of the argument that McKeand is making here; video games, being an art form, are memorable for the experience, not the technical implementation that sits behind them. This cuts to the core function of art in society. Art is a form of communication – it is the way we preserve traditions, challenge authority, share stories and ideas, record our thoughts and educate the next generation. To do that effectively, we need structure, and every art form has structure. The difference – and this is where I’m building on McKeand’s line of thinking here – is that in every other art form, we don’t focus our analysis and appreciation of the work on its structural elements. That’s not to say that those structural elements are unimportant – without them, the art doesn’t work – but the discussion about those elements is generally kept to the people directly involved in the industry. Unlike with video games, the audience rarely focuses on them as a primary point of discussion.

To show what I mean, I’m going to list out a bunch of other forms of art, and highlight how the structural elements are generally not the thing that the audience talks about. You’ll dive into these things in-depth if you take the art form seriously as a discipline among its practitioners, but if you’re sitting in the audience you’re less likely to be focusing on those elements.

Paintings: Let’s take Salvador Dali as an example here. If you’ve ever been to an exhibition of Dali’s work, do you remember the frame that the melting clock painting had? Did the little plaque next to the painting talk about the canvas that the painting was committed to? To be sure, without both frame and canvas, the painting wouldn’t exist, but what people actually talk about with regards to Dali is his contributions to the surrealist movement and the meaning of his work. Here’s an example of such analysis. Not a word on the structural elements of the painting.

Literature: For the most part, our reading and analysis of a book has very little to do with the structure. We’re not counting lines in paragraphs. Nor are we assessing the quality of the paper used in the printing of the book. These things are important in a general sense (when we talk about books as a whole, most of us prefer the experience of reading a book to an e-reader, for example), and editors and publishers exist to ensure that the structure of any given book is correct, but outside of the occasional self-referential post-modernist experiment that makes the entire experience about structure, when we sit down to read a book our response is to the narrative itself. We care more about the thematic reasons for why Boromir dies in Lord of the Rings than we do about whether that paragraph was too short. When we talk about Lovecraft we discuss the potency and contribution of cosmic horror to horror tradition (and, probably, Lovecraft’s raging racism), and we do that more than we quibble over whether the printed edition that we’re reading has better paper stock than the version someone else is reading.

Ballet: A ballet dancer needs to know about ten million different technical elements, and they train for obscene hours over obscene years to have the right structure and form to deliver their art form. Other ballet dancers or chorographers will naturally know to look out for those tiny technical details, but the difference between ballet and something like rhythmic gymnastics, is that the art form isn’t designed to draw attention to the technical details, the audience is meant to see the beauty, elegance, and underlying emotions and story being shared.

Music: Music is a little different, in that there is a segment of the audience that is weirdly focused on the technical qualities of what they’re listening to. You probably know one; they’re the people that subscribe to services like TIDAL just so they can have the highest quality audio streams possible. But that is a very small segment of the community – most people just want to enjoy their favourite music and expect it to be produced nicely enough to be enjoyable. Spotify, Apple Music, or a good ol’ CD is good enough for most of us, and when we talk about music we’re more interested in articulating what we like about our favourite artists. To be more blunt about this; when music writers interview people like Nick Cave or David Bowie, no one is really interested in asking when the music will be available in high resolution. There are so many more interesting things about their art than that.

Cinema: It’s easy to suggest that cinema is an exception since people do seem to care about the quality of the resolution, frame rates, and the like, but outside of the Hollywood blockbuster, I would argue that no one actually cares, and outside of the industry itself, very few people even know how structural elements like mise-en-scene, storyboarding, and the like work. What’s more, and again outside of the most popcorn of the blockbusters, most cinema fans and the vast body of critical analysis of films is focused on the narrative and thematic elements than it is in breaking a film down into its technical components. No one is out there saying Citizen Kane is redundant because “who wants to watch old films”, like Jim Ryan suggested of Sony PlayStation’s backlog once.

So, meanwhile, over in video games, it takes no time whatsoever, to find a significant difference in rhetoric. Take this interview on Far Cry 6 from VCG as an example; this is the top interview that popped up when I Google searched a big upcoming game at random: “One detail I can add about the new generation is that it allowed us to run the game at 60 FPS and in 4K, which is really cool. I test it on kits at the company and I can definitely see that as a great thing on the new generation, but that doesn’t mean that the previous generation is abandoned in any way. We’re really, really cautious about that, so we’ll show more detail and more info very soon.”

But, okay, you might say. That’s the big end of town, and little different to blockbuster Hollywood. So, what about the arthouse end of town. What about the likes of Ori and Hades – the darlings of the space? Well, here’s an interview where, rather than talk about the artistry, they talk about frame rates and Switch ports. Imagine interviewing Salvador Dali and asking him about the frame he used for that melting clock. Finally, of course, it’s not just the media. You can’t talk about any game on social media without the conversation ending up on structural elements. I really mean any game. People talk about frame rates in visual novels.

Again, none of this is to suggest that the structure or “frame” in video games isn’t important. It absolutely is. Just as the structural elements in other art forms is critical to the quality of the end work. In development circles and developer-focused events, like GDC, the discussion of such technical elements is essential for the development of the art form. The issue with video games is where the focus sits in discussions and debates among the community.

So, here’s where my rhythmic gymnastics image comes in (I told you there was a reason for it – it wasn’t just because I fell hopelessly in love with Son Yeon-Jae after seeing her shock the world as the first Asian rhythmic gymnast to make a final at the Olympic Games):

At the audience and media end of things, the way that “we” are obsessed with frame rates, specs, and tech terms like ray tracing makes games seem like rhythmic gymnastics in comparison to an actual art form, like ballet. Both are amazing and beautiful to watch, but the difference in the cultural depth and importance is very much decided by what the audience is focused on. Rhythmic gymnastics is focused exclusively on judging the structural elements rather than the artistic quality, and as a result, the athletes are only very secondarily concerned with the artistry. In ballet, meanwhile, the fact that they’re not judged for the technical elements (it’s expected, but they’re not judged for it by the audience and media) means that they do focus on the artistry come performance time.

If we want games to have the same respect as an art form as something like ballet, literature or sculpture, that comparison – and what we focus on when we talk about games – is worth thinking about.
Matt S.
Editor-in-Chief
Find me on Twitter: @mattsainsb
Share this

EastAsiaSoft has fourteen new games on the way

Nippon Ichi is getting time-loopy with its new one