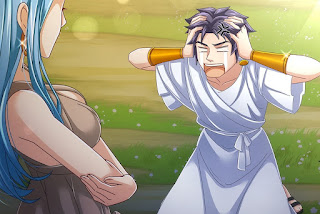 This week’s going to be a bit heavy on the visual novels, but there has been quite a few well-worthwhile ones that have been released over the last week. The first is The Radiants, which is an otome, and currently only in alpha, but I absolutely love what this game is offering. Visually it is absolutely gorgeous (both protagonist, Emmalyn, and the various boys she gets to woo are just some really lovely examples of visual novel sprites), and the concept for the game is really intriguing, too.
In The Radiants, you play as an “ordinary college student” who witnesses the death of a young woman, and is subsequently pulled into a world of intrigue and magic. With three love interests, an “exploration mode”, stat raising and tracking and multiple endings, The Radiants might only be in an early stage right now, but it has a lot of promise indeed.
Casina

Now, this one really intrigues me, as someone who has mused on the way that the visual novel medium could be used to re-tell classical theatre myself. I’ve been thinking on how Shakespeare might be adapted to the visual novel, but this developer has gone much further back than that and has decided to visual novel-up one of the most famous plays from back in Ancient Rome. Written in 184BC, Casina was considered a great comedy back then, and this visual novel looks like it has very much kept that in mind.

With full animation and voice acting, as well as support for six languages, Casina is a full-featured visual novel, complete with good and bad endings as part of its interpretation of the play. The playful art is charming, too as an anime take on classical Roman aesthetics.
Deep Sea Valentine
I’m not 100 per cent sure of this one. When the description includes a line like “lesbian-approved: I made my lesbian friend play this and she thought it was good,” it’s generally a red flag for being a game that you really don’t want to play. However, based on the rest of the description and trailer, it might just be reflective of a particular sense of good-natured humour, and the game does look charming otherwise.
It is indeed a romance game, in where there are six romanceable girls, and it’s a proper dating simulator in that you’ll need to make decisions and manage statistics if you want to end up with any one of the girls. The game has a nice aesthetic – particularly with regards to the bold, personally-filled character sprites – and it was apparently inspired by the vaporware of yesteryear. The music, based on that trailer, is just the best B-grade synth homage, too. There aren’t many reviews for the game over at Steam right now, but they all seem to find the game to be a bit buggy, but charming. Hopefully, it’s a sign of big things to come for this game.
Park Lands Investor
We’ll finish up this week with something different to visual novels, but Park Lands Investor seems to be very (very) much my kind of game. The screenshots might look basic, but it’s what this game promises that is exciting. In Park Lands Investor, you play as an investor in the stock market of a lawless world. That means that you’re investing in industries like assassination, “disposal services” and more. You can imagine the implications of getting into rivalries with other investors in this kind of market, I’m sure. 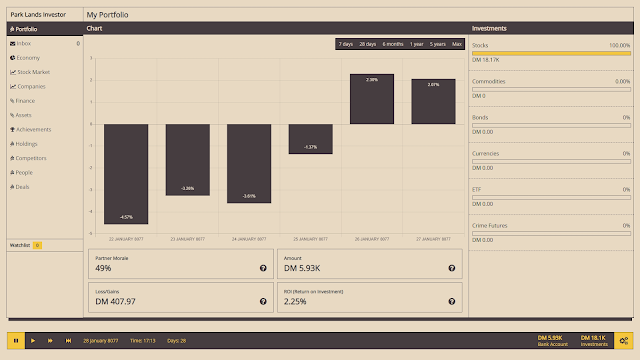 Looking at the screenshots, it seems like a fairly deep and authentic recreation of markets, and you’ll be able to bet big or invest safely, depending on your personal appetite for risk. The game is dynamic in that others are investing in companies and stocks at the same time as you, and there’s so much data to wade through that this could become a game that, like Football Manager and the like, turns you into a fan of spreadsheets. It’s currently in alpha, so expect bugs if you do play, but this does look like a game that’s worth supporting in development, as it is both ambitious and niche.