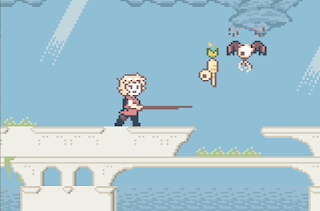 We’ll start this week off with a game that looks both charming and inspiring. What Comes After comes to us by the creators of Coffee Talk (that very excellent game) and Rage In Peace, and it a short, clearly personal game about life and death.
You play as Vivi, a girl on a journey to where people, plants and animals go after they die, and what comes after. In her journey (on a train), Vivi learns about love, regret, life and death and most importantly, about how to love yourself and overcome feelings that you’re a burden on other people.
A game like this could go some very dark places, but the developers promise that it’s heartwarming and has plenty of humour in its stories and characters. It’s the kind of wholesome good game that really represents itch at its best – telling personal stories without concern for the typical expectations around length and content that video games developers generally have to grapple with.
Showdown

Another thing that itch really has going for it is its ability to indulge “new” retro games. There are legions of game developers out there that enjoy challenging themselves with old systems and limitations, and Showdown is a really good example of this. It’s a new game, but it has been developed for the Commodore 64. Remember that machine? It was my first games machine, and what fond memories I have of the primitive games that came on that thing.


This one is a simple competitive shooter. You and your opponent each have five bullets and it’s a game of ducking and diving between cacti while trying to get a clear shot (or blow up the exploding crates that drop randomly for some area damage).
That’s all there is to Showdown (these games were incredibly simple by modern standards), but if it plays nicely, it could be a lot of fun. You’ll need an actual Commodore 64, a C64 Mini, or a C64 emulator to play this game, but for collectors, the developer is going the whole way to release the game on cassette for the full, authentic experience.
Information Overload
If there’s one thing that the 2020 Presidential Election in the US has show us, it’s that information overload is a real problem. It’s becoming increasingly difficult to tell truth from fiction and find information sources that are reliable, accurate, challenging and entertaining. Information Overload is a game in response to that which asks a simple question of the players: what if you want to just tune out?

It’s a browser-based little arcade game (totally free to play), which simply assaults players with information, be that people knocking on the door, the TV and radio blaring, or the curtains flying open to assault your eyeballs with the real world. Your goal is to run around the apartment, shutting down all the sources of information as possible before your blood pressure hits the roof. Those rare moments where you get a second’s downtime really do come across as a rare, blissful, moment of peace.

Coria and the Sunken City

Finally this week we’re going retro again with a brand-new game that has been developed for the Game Boy and Game Boy Color. If you’ve got an emulator or a retro emulator device you’ll be able to play this just as you would the Game Boy games of old, and Coria looks really, really good.
It looks like it has been inspired by Shantae in some ways, with an open-ended approach to its 2D platforming, and a combination of towns of friendly NPCs to meet and interact with, and skills and unlocks to help you reach new areas. We’re also being promised hidden secrets, and all of this in the context of some horror themes, with “Sunken City” likely to refer to Lovecraft in some way (I would expect).
Currently the game’s only in demo form, but it’s well worth downloading and checking out the creative vision behind Coria now. It’s going to be one to watch going forward.
That’s it for this week! If there are any new itch.io games that you’d like to bring to my attention, don’t hesitate to drop me a note! I’m very keen on celebrating the creativity and energy of this truly wonderful platform for games-as-art.