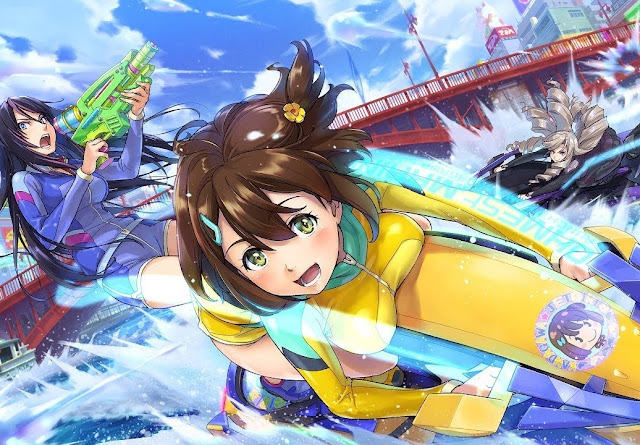 Love, the kind you clean up with a mop and bucket
Like the lost catacombs of Egypt,
Only God knows where we stuck it hieroglyphics
Let me be Pacific, I want to be down in your South Seas
But I got this notion that the motion of your ocean,
Means small craft advisory
So if I capsize in your thighs, high tide, be minus five,
You sunk my battle ship please turn me on,
I’m Mr. Coffee with an automatic drip
So show me yours I’ll show you mine “Tool Time”
You’ll love it just like Lyle
And then we’ll do it doggie style
So we can both watch X-Files

If you don’t recognise the lyrics to the song that I’ve just copy/pasted up, don’t worry. It just means you didn’t grow up when I did and didn’t have to deal with your entire school year thinking that Bloodhound Gang’s seminal album Hooray For Boobies was just the edgiest thing. It was edgy ’cause it is brazen about the sex, you see? It’s using all these dirty innuendos because sex is funny and when you’ve got a bunch of teenagers convinced that it’s edgy and awesome than the quality of the art (in this case, “music”), isn’t all that relevant any more. They’re still going to play it on repeat, laugh at it, and sing it ad nauseam on the bus. 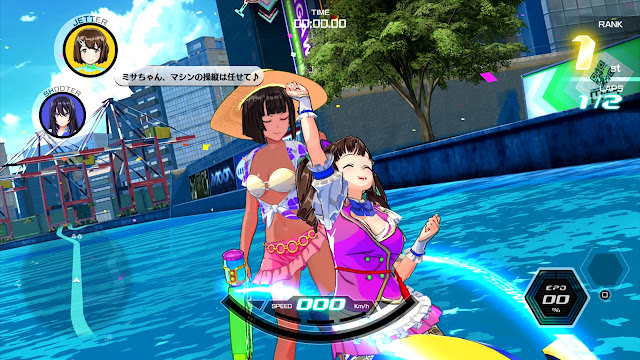 Related reading: One of our reviews of the Senran Kagura series.

Kandagawa Jet Girls comes to us from the same creative mind as the Senran Kagura series, and if that doesn’t mean much to you then welcome, it’s really awesome to have you as a first-time reader at DigitallyDownloaded.net! Senran Kagura is a series of brawlers (and the occasional side game) which is notable not so much for the quality of the action as it is the fact that 90 per cent of the girls – who comprise about 99 per cent of the cast – are as long in the chest area as they are tall. Senran Kagura somehow makes Dead or Alive’s breast sizes seem modest and human. I’m not even talking about Marie Rose, either. I’m talking about the big girls, like Hitomi and Kasumi… Senran Kagura over-inflates them by a factor of ten and then some.

Those boobs wobble. They bounce. They threaten to poke an eye out. As an aesthetic, they’re the most egregiously over-sexualised example of in video games (until you get to the genuine adults-only stuff), and Kandagawa Jet Girls is quite blatantly from the same school of thought. 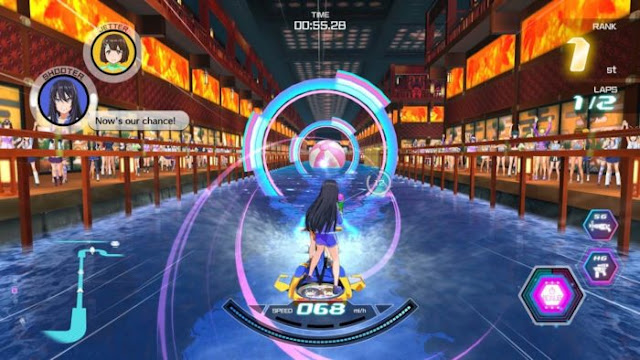 The thing is, though, and this is a dirty little secret that the more prudish out there love to avoid, even as they tut-tut anyone that dares enjoy the work of the one behind it all, Takaki Kenichiro: the aesthetic of these games is entirely appropriate to what he’s doing. Both Senran Kagura and Kandagawa Jet Girls aren’t just “over the top anime games.” That’s Dead or Alive, School Girl/Zombie Hunter, Hyperdimension Neptunia, Onechanbara or Gal*Gun. Those games all find satirical humour in their exaggerated character designs and tropes. Takaki, however, isn’t so much over the top as he is in your face. Even when you’re not looking at the girls, Takaki’s work is so notable for explosive energy, migraine-inducing vibrancy in his use of colour and pure excess that his games have a different kind of appeal. They’re still amusing and they’re there to make you laugh, sure, but there’s a brazenness to it; a kind of explicit self-awareness that, with a wink and a nod, challenges those who wouldn’t ever play it to notice it and subsequently be upset by it. Creative vision or cleverly cynical play for media notoriety? It’s probably a bit of both, but it assuredly works if you judge it as either.

Oddly enough, it does mean that I don’t find these games to be particularly attractive on the eyes. Obscene oppai isn’t really my thing, as much as I enjoy fan service, given that the character models are all built exclusively around that one particular part of the anatomy, I do think I prefer something like Dead or Alive. What is just as well for me, however, is that Takaki’s material makes for some really good games, and Kandagawa Jet Girls is the boobies-and-jetski Mario Kart that I never realised I actually wanted.

Just like in Mario Kart there are items to pick up around the tracks, and those winding tracks all have plenty of sharp turns to fine-tune racing lines and master power slides. Execute those power slides well enough and you’ll get a good boost of bonus speed, and then there are jumps and boost pads to further add complexity to the tracks. Beyond that Kandagawa Jet Girls gets surprisingly technical at times – you’ll need to raise or lower the nose of the jetski depending on whether you’re aiming for speed or control at that particular moment, and there are all kinds of strategic decisions you need to make around when to use boosts, whether to save the boost energy for a powerful super attack, and so on and so forth. You’ll be spending the first 20 minutes or so just playing through tutorials, which is not what I expected for an arcade racer. 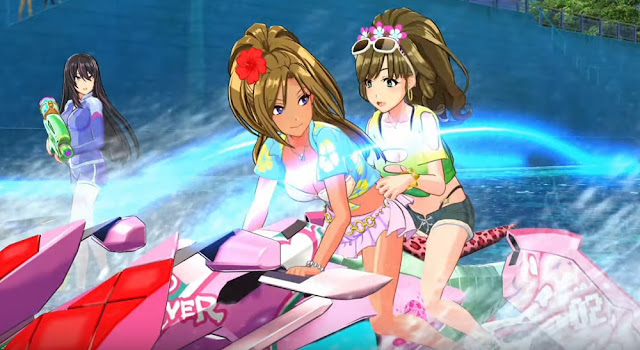 It means that Kandagawa Jet Girls is as inaccessible as I’ve ever seen a “party” racer be. There are all kinds of fine-tuning options for the jetski and skill plays a major role in this game. In Mario Kart you can still hoon around throwing items and, even if you’re a rank beginner, you can still feel like you’re doing something right because the game has a way of levelling the odds. A beginner is going to spend a lot of time crashing face-first into walls in Kandagawa, because it’s just not that accessible.

Once you get into the swing of it, though, it feels excellent to race around. Really excellent. Those sharp turns which, at first, you’ll find impossible to navigate, suddenly become a series of slick, deft slides through the water. The initial sense of inertia and unresponsiveness eventually starts to open up a sense of tactical depth and those weapons, while certainly a part of the race, are nowhere near offering the same “rubber band” solution of the more powerful items in Mario Kart. In other words, if you race well in Kandagawa Jet Girls, you’ll feel like a champ and be rewarded in kind. As a racing game Kandagawa Jet Girls is executed with precision and where Senran Kagura was always a B-tier brawler under its A-tier assets, Kandagawa is a legitimately high-quality bit of entertainment.

There’s quite a lot to it, too. Plenty of tracks, plenty of story modes, plenty of unlockables, and plenty of grinding. The one thing I wasn’t a fan of at all is the copy/paste of the three-star scoring system from mobile games. You’ll have to complete little arbitrary side-objectives on each track (“shoot ten balloons with your gun, don’t hit a wall”) in order to fully “complete” that track, and those objectives are all there exclusively to send the completionists into a spin that will double or triple the play length. The narrative is pleasant enough, if only because the cast of characters is so ridiculously eclectic that each new cut scene has a completely different energy for players to bounce off. It runs the gamut of “Japanese anime” tropes – shrine maidens, wannabe idols, delinquents with awesome hair, the weird foreign student – but you’re never given a moment to go beyond enjoying the initial impression to the point where you start reflecting on cliche because the narrative gets in the punchlines in good and quick before you’re thrown onto the race track. 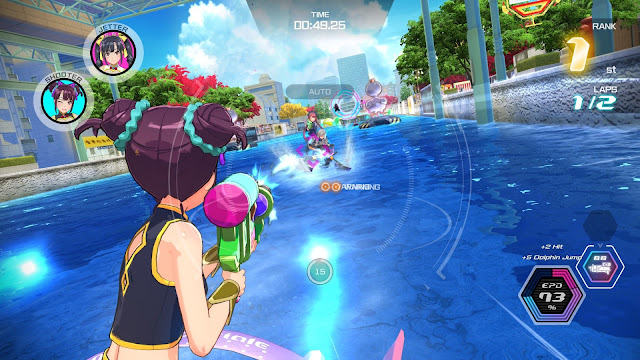 I will say that it’s looking more and more like that original Senran Kagura, which balanced out the breathtaking oppai with some surprisingly nuanced and poignant storytelling, seems more and more like a distant memory across Takaki’s repertoire now. Perhaps he decided that because people weren’t talking about the narrative in his work, but instead were talking about the oppai, that his attention should shift in kind, but it’s a pity nonetheless. Kandagawa Jet Girls’ narrative is fun and bubbly, but hits on the deeper coming of age themes with such a feather-light touch when that original Senran Kagura would have been willing to make you sit down and damn well read your way to the next boobie scene.

One final note – Kandagawa Jet Girls is loosely based on real waterways and settings within Japan, and this is something you never really appreciate until you’ve actually spent time on them – the Japanese love their waterways and boating experiences, and they do give you a different view of whatever city and location you happen to be in. In this game, those settings and waterways are rendered with such gorgeous art direction that it was almost a downer because I was reminded that I’ve missed out on two planned trips to Japan already this year (damn COVID-19) and I really, really miss landmarks like the golden poo building in Asakusa. Most of the time you’re zipping around too quickly to really enjoy the level of detail and colour in the environments, but when you do get a chance take a moment to enjoy the scenery, because real effort went into this one.

Kandagawa Jet Girls is a joke in the same way that Senran Kagura and The Bad Touch song that I quoted at the top is: it relishes in being brazen to the point that it knows it’s going to draw some eye rolls. It also knows that many of its fans will enjoy both the brazenness and the eye rolls from the puritans – it’s edgy like that. But, really, it’s great. It’s an excellent blend of “kart” racer and jetski playground, and it is built with a level of precision and eye for detail that I think will surprise and impress many. In other words, it is yet another hit of the kind of breezily entertaining experience that, like so much of Takaki Kenichiro’s work, deserves more respect than it’s going to get.