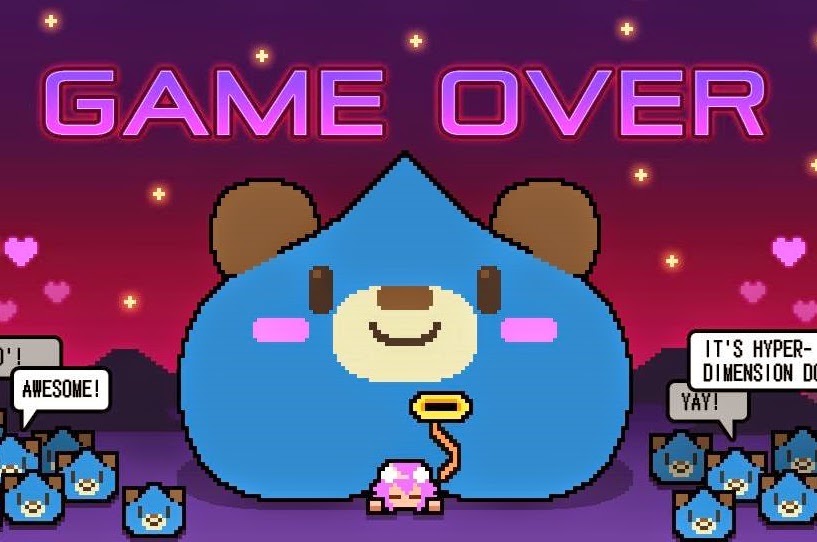 The Hyperdimension Neptunia series has been kicking for several years now and, despite its polarising otaku-centric qualities, has impressively reached a point where demand is sufficient that western fans are getting at least six releases in a year’s time. That release schedule would make Mario blush; poor protagonist Neptune must be sleep-deprived and overdosing on caffeinated pudding. Either publisher Idea Factory is incredibly daring or it is confident in the franchise’s sustainability to release so many games in quick succession.

With all these releases impending and some already upon us, there come the inevitable curious souls who, after stumbling upon a screenshot or article online due to the extra visibility, decide the franchise is worth a look. I’m embarrassed it took that extra spotlight to finally get me playing, but my time with the remakes of the first game, Re;Birth 1, revealed how this IP could be so enchanting as to warrant all the hoopla.
It’s no secret that this series is well-loved at Digitally Downloaded and, frankly, if you’re looking for a veteran fan’s in-depth assessment of what makes this entry tick, I’ll point you in the direction of Matt’s review of the Vita game from which this PC port came. 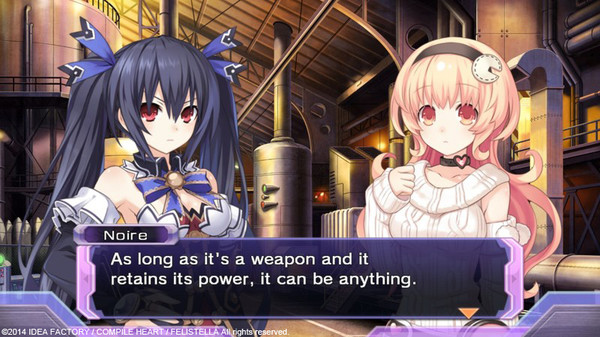 For the uninitiated, this game is both a sentimental parody and a wily satire of the video game industry in JRPG form. The entire world of Gamindustri is based on the infamous “console wars” that sadly still plague the gaming community’s message boards today. Key characters are anthropomorphic consoles or companies that deck themselves out for battle with game disks and CPU tweaks. A stunning number of foes draw direct inspiration from arcade games in the vein of Pac-Man and Space Invaders. The video game motif extends right down to the victory jingles sung by the player’s party, one of whom playfully imitates and parodies the iconic victory tune of Final Fantasy. I do appreciate that Neptunia references the obvious key players in the industry just as much as niche studios too. Indeed, for every instantly recognisable Nintendo reference is a nod to Falcom’s Ys or, amusingly enough, developer Idea Factory itself.
These backdrops may be used for a great deal of light-hearted fun and silliness, but this game acknowledges its roots and respects them with a feverous heart. More crucially, Neptunia steps out of the parody mould from time to time to draw attention to very real issues within the industry, issues with game design as a whole, or even poke fun at the game’s own target otaku demographic. This is done through clever use of the anthropomorphic consoles and their personalities that often reflect public perception of the systems on which they are based. I suspect the bulk of the more critical commentary will go over many heads because they require a bit of reading between the lines and a thorough knowledge of the industry in ways the average player wouldn’t care for, but Neptunia at least succeeds in conveying the broader plights of players and developers alike through its comedic script.
The game portion is a treat in its own right too. It trims out plenty of the less necessary JRPG elements such as traversable towns or a “proper” world map, but the simpler blueprint allows the game to focus constantly on what it excels at. The added emphasis on combat means players will have plenty of joy grinding away or taking on tougher, optional opponents throughout the game’s several field areas that link story events and monster encounters. 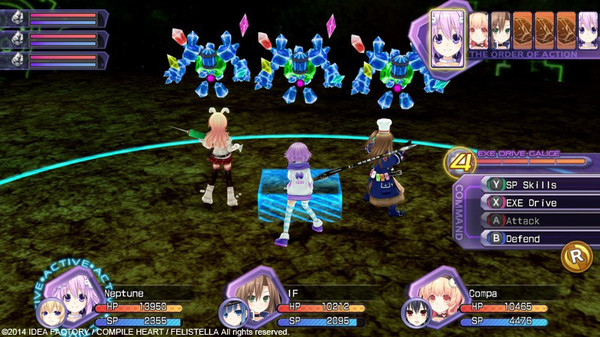 These battles are all turn-based, but calling Neptunia traditional fare would be a disservice. Here, both the enemy and player units occupy their own circular regions that Neptune and her merry gang can freely jaunt around. They play out similarly to a Venn diagram in that, should you overlap, you’re able to attack a foe. Should the cursor in front of your character overlap multiple opponents, however, you can target and potentially multiple adversaries. In the early going this is tedious since you need to line up a character’s small flashing square that represents their attack range with multiple enemies, but this system does immediately reward players for taking the extra time and utilising weapons with expansive ranges. There’s also a reel that determines player order out similarly to the one in The Legend of Heroes: Trails in the Sky (albeit much simpler here) and you can guess how much I love that. Plenty of deeper combat opportunities exist, but I’ll not rave about them all here.
Really, my only beef with the game’s structure is that story events sometimes thrusts players into situations with multiple encounters wherein you’re given little chance to no chance heal up. There’s righteous punishment for not grinding or maintaining the party’s equipment and then there’s being brutally curb stomped due to a lack of foresight. To the game’s credit, the player is the one who has to trigger the events and the moments are usually accompanied by some kind of comedic saving grace.
As for the PC additions, Re;Birth 1 isn’t too shabby. If Hyperdimension Neptunia’s Vita remake brought the game up to date in terms of fight mechanics, this PC port offers an extra layer polish on a wonderful formula; it’s not going to reinvent the game, but boy are some of the additions snazzy. Not content with cutting corners by maintaining the Vita game’s specifications where possible, Idea Factory has gone and buffed the game up the game’s visual department to look better suited on its new home. I did test out the Vita version for comparison’s sake and I must say this one takes the cake for me. There are some oddities though, such as some peculiar areas where the developers forgot to change the button commands to reflect the change of console, but patches are always nice. 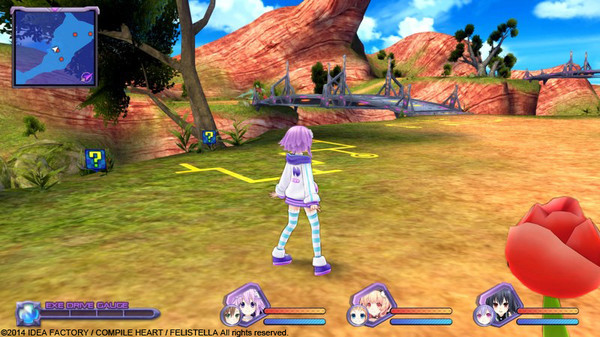 If you play JRPGs chiefly for the stories, too, you’ll appreciate the inclusion of free DLC from the get-go and, by extension, the option to abuse stronger equipment to progress steadily and avoid a lot of the grind. Granted, that shouldn’t be an issue since grinding is not that unreasonable for the most part in this game, but the choice is worthwhile if you’re seeking a more visual novel experience and, as said earlier, this game’s script certainly holds up its end. This version might not have established fans double dipping as it’s fundamentally identical to the Vita release, but boy is it fine if you lack Sony hardware.

Related reading: Hypersimension Neptunia Re;Birth 2 has not yet been announced for Steam, but we suspect you can expect its release as well. Check out our review here.

Hyperdimension Neptunia Re;Birth 1’s degree of fan service means it probably won’t resonate with anyone unwilling to step outside their comfort zone, but beyond that entry barrier lies a laboriously crafted JRPG with tangible meaning behind its story and worthwhile commentary on the video game industry.

– Clark A.Anime Editor
Email me at: clarka@digitallydownloaded.net
Sign up for our weekly newsletter! Exclusive content to your inbox!