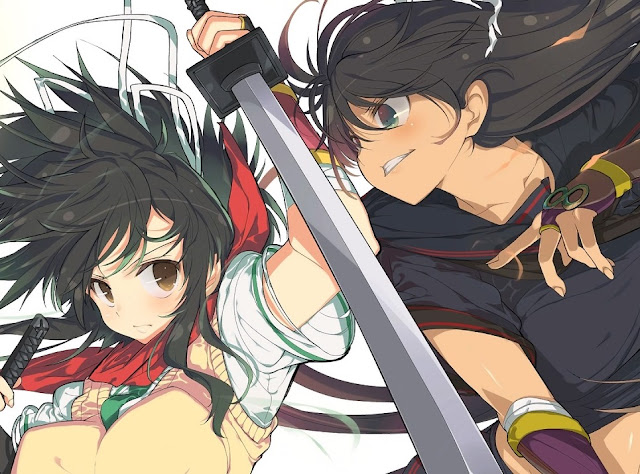 In the grand scheme of things, the complete re-development of the original Senran Kagura Burst is about as pointless as a game development project gets. The original Senran Kagura Burst, on the Nintendo 3DS, was a side-scrolling brawler that was equal parts pure controversy (because games that have girls with big boobs and endless upskirts are always going to be controversial), and really damn good brawler. The developer of Re:Newal, Tamsoft, could have just taken that exact game and juiced up the resolution for PlayStation 4, and it would have been a great purchase.

Instead, Tamsoft has gone and remade the game entirely, using the 3D brawler engine that was previously used in titles such as Estival Versus. Now, Senran Kagura Burst plays a little like a Dynasty Warriors or Sengoku Basara, but with school uniforms, panties, and barely contained boobs everywhere. It’s still a lot of fun, but in the world of 3D brawlers Senran Kagura competes less favourably within its genre than its 2D brawlers do compared to their peers.

The biggest problem with Tamsoft’s camera engine. Any environment that features buildings of foliage is susceptible to the camera getting lost on the scenery. Given the pace of the action in Senran Kagura Burst Re: Newal, this can become very frustrating to deal with, very quickly. Given that the environments are also purely functional in nature, the shift to having a 3D perspective of them doesn’t add anything to the experience, which makes it all feel like a big step backwards on what the original Burst offered. 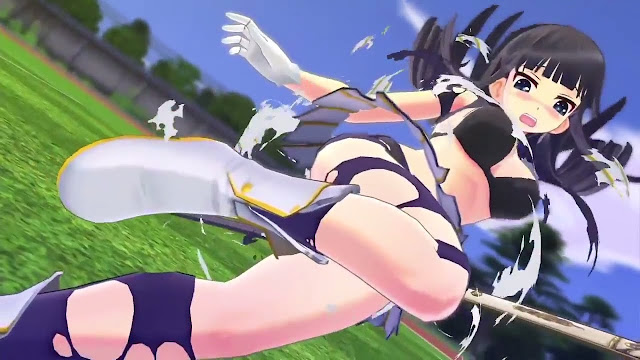 The combat is very dynamic and entertaining, though. As with Dynasty Warriors, on any given level you’ll be mobbed by a large group of enemies, which you then need to use a mix of light, strong, and special attacks to deal with them. Air juggling’s an important mechanic to master (where you throw enemies up into the air and then execute follow up attacks from up there), as is the timing for blocks and counters, and there’s a transformed mode you can enter where you to be powered up for a time (and get to enjoy a magical girl-style stripping/re-dressing cut scene), but you need to build up to that and it needs to be executed at the right moment.

All of this happens fast. Senran Kagura is, at times, a game of twitch response and precision, which actually seems counter-intuitive at times. For a game that’s built around sexualised humour, to have action that’s so fast that you never have the time to notice the ripped clothes and crotch shots is to make the action come across as rather bland. With some of Tamsoft’s similarly-themed action games on PlayStation Vita and PlayStation 4 (the Hyperdimension Neptunia action games, for example, or Onechanbara), you can pause the action at any point to enjoy a free camera view and screenshot opportunity of whatever is going on. With that you can appreciate the over-the-top ridiculousness of it all. That’s not a feature of Senran Kagura, though, and consequently, though the action is plenty fast and furious, it doesn’t come across as inherently silly as it should do.

There’s an odd tonal blend in the storytelling side of things too. Just about every cutscene in Re:Newal plays up the sexualised humour. The girls hide things in their cleavage, enjoy long sushi rolls that are clearly designed to be phallic, and grope one another with abandon. Is it crass? Yes, sure, but the completely uninhibited tone of it also comes across as satirical and self-aware. The overall narrative even plays on the Charlie’s Angels theme, with empowered women that have agency over their sexuality being sent out on missions and doing the hard work, while the sparing few men in Senran Kagura being of little value and/or distractions that the women don’t really need. There’s a great scene early on where a baseball star approaches one of the ninja and declares his love for her (without even knowing her name). She decides to ignore him (and never talk to him again) – her decision, her character’s agency. For all the sexualisation and male gaze that’s present in this game and series, Senran Kagura’s girls are far more empowered than the series reputation would have you believe. 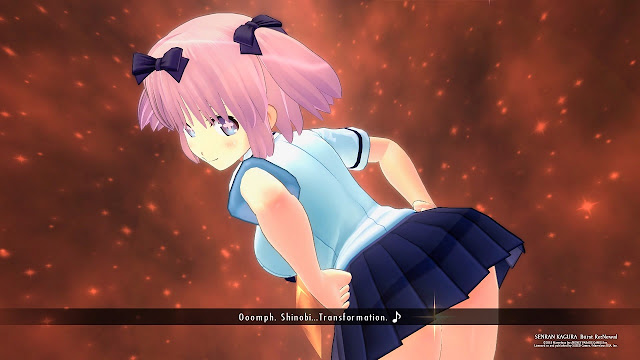 This sense of satire and humor contrasts with the visual novel sequences, which pop up every few missions. These are the strangest element of the game of all, because they are surprisingly earnest. Each chapter of the tale involves a lot of text, and gives you a surprisingly nuanced take on the characters and the personalities and events that drive them to become ninjas. Future Senran Kagura games have greatly backgrounded this sincere kind of storytelling to double down on the fanservice-on-fanservice, but there was a point where Senran Kagura looked like it could have veered in a very different direction in how future iterations played out.

There are even some deeper themes at play in Senran Kagura, beyond the characterisation and the clear love for Charlie’s Angels. The game’s effectively split into two different stories; that of the “good” ninja, and that of the “evil.” This isn’t a subtle delineation; the characters refer to themselves and their activities as “good” and “evil.” And yet, right from the start, we see the “evil” ninja doing things that aren’t evil at all. As the narrative progresses, that line between the two increasingly comes across as utterly nonsense and arbitrary. You probably didn’t come to Senran Kagura expecting some kind of discussion about moral relativism, and yet, while it’s not the most nuanced or academic take on the subject, that’s exactly what you’ll be getting as you play.

There was one particular feature removed from the PlayStation 4 version of Re:Newal that bears mentioning, largely because it upset many fans of the series; the groping mini-game (“intimacy mode”) has been removed from the PlayStation 4 version, and the PlayStation 4 version alone. It’s still present in the PC iteration. In that mode, you are given the ability to “interact” with the girls via a disembodied hand on the screen that you control. I don’t understand why Sony insisted on the removal of that feature, given that what is left in the game is every bit as discomforting if you’re inclined to see it that way. That being said, I’m not distressed by its removal, as I don’t think the feature added anything to the game in the first place – Senran Kagura Reflections was basically that mode as a standalone game, and it has no value whatsoever. 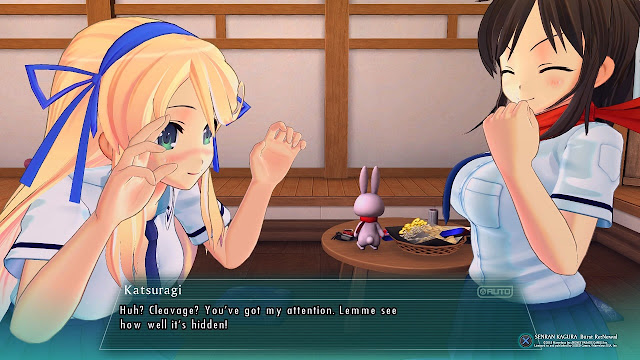 Senran Kagura Burst Re:Newal would have been better off being a simple “big screen” version of the excellent 3DS original. In remaking it to become a 3D brawler, Tamsoft has given us something less refined. With that being said, the core action is still exciting and dynamic, with a layered combo system that ensures it’s never quite a button masher. Throw in the series’ infamously hyperbolic and satirical sexualisation, and you’re still left with a good time. There are games that do genuine sexiness better, and there aren’t many out there that have the wild, unbound entertainment value of Senran Kagura.