Back when I was at university I tended to keep funny hours and do most of my work very late at night. I found myself more productive at that time. Being a film student, I’d also often have the TV on in the background with whatever late night movies were on blaring out. This was back when late night movies were what networks filled those time slots with, of course. I have no idea what fills those slots today. I assume re-runs of reality TV nonsense.

Related reading: This game is set in the same universe as Onechanbara. Read Matt’s review of the most recent game in that series here.

Boy did I watch a lot of trash B-grade exploitation and horror films thanks to that working pattern. See, TV networks didn’t just throw films on at the 1am time slots… they threw on the cheapest films they could possibly find in their catalogues, and those films were often from those special – no, glorious – days of cinema where all you needed to make a film were a group of young, aspiring actors, a remote location, and a script that mixes boobs and blood in equal measure. Bam! Instant, easily marketable film.

Those films have generally fallen right out of vogue, and low budget cinema has moved in other directions – notably towards high quality television. There’s still the odd modern trash B-grade classic, though. Anyone seen Zombie Strippers? A film from 2008 starring Jenna Jameson and Robert Englund has one particularly memorable scene where zombie Jameson uses parts of her anatomy to fires pool balls, like a cannon, to attack some other people. The visual image you have of that is exactly what was in the film. It’s something I sure hadn’t seen before, or after, and in fairness it probably shouldn’t have been made… but it sure was memorable.


Anyway, I digress. The point of this introduction is that School Girl / Zombie Hunters is the closest I’ve ever seen to my beloved trash B-grade overly sexualisd horror done in a game. Sure there’s Dead or Alive, Senran Kagura, Moero Chronicle, and whatever else that you want to argue does the exploitation thing, but those don’t have the horror element. There’s Onechanbara, by the same developer as this one, and it’s got that mix of blood and boobs, but that one’s narrative and themes is positively high art compared to this one. School Girl / Zombie Hunters is that real mix of cheap horror and sexualisation that makes for a grimy, nasty, trashy experience.

And dear lord did I have a lot of fun playing it.

As the name of the game suggests, you take control of school girls (there are five of them), that have the task of running around their zombie-infested school, gunning monsters down by the hordes, and completing one mission after another. Their ultimate goal is to just survive long enough for the cavalry to show up, but they’re more than capable warrior ladies themselves; in fact, they’ve all had military training, for reasons (B-grade horror rarely feels the need to explain beyond “reasons”), and love their guns. 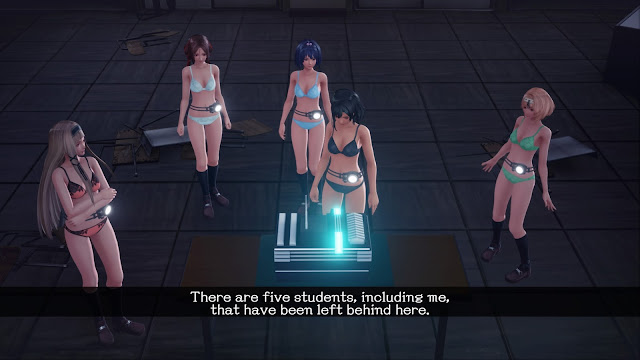 Each girl is a specialist in a different weapon, from automatics to sniper rifles, and each also has a special ability, be that the ability to heal her allies, find hidden objects easily, or pull of some spectacular melee attacks. In other words, in basic principle, the game’s a co-op shooter, where your choice of girl buddies up with either another human player or AI ally to take on the missions.

Now, on that very basic level, School Girl / Zombie Hunter is, mechanically, a lot of fun. It’s very simple, repetitive, and low budget, but it’s fun. Each mission is kept nice and short, and there’s a great range of loadouts to choose between for each character. Once on the field, you’ll not have any time to really think about what’s going on, as the hordes of zombies come thick and fast, and drop plenty of loot, right up to the “mission success” message pops up. With the exception of the sniper rifle, which is a bit twitchy to manage and not particularly useful in the typical high-action mission, all these guns feel great to unload into the zombies, and, finally, the zombies are often of the slow, shambling kind. I know modern zombies lore is all about making them fast, deadly enemies, but dear lord is it satisfying to wade into the shambling hordes and just let rip. It’s 80’s and 90’s fantasy horror to a ‘T’. For variety there’s some fast moving zombies, wall-climbing zombies, and so on, but it’s those slow shamblers that I had the most fun with.

It’s not perfect, of course. The zombies find themselves stuck on furniture or other objects often, and because the game’s engine can’t handle too many on screen at once the game instead decides to “teleport” enemies into the field as you kill existing ones… often right next to you. You’ll have a second to get out of their way before they become active, but it’s still not cool when that happens right behind your back and just off-screen. And if you can find someone with a twisted enough sense of humour to enjoy this game with you, then please play the game in multiplayer. The AI is not smart, at all. 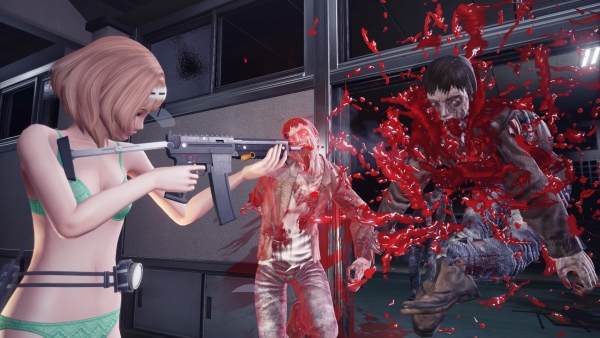 In the context of this particular game these are minor quibbles though, and I honestly think that if this game had a different skin, it would be welcomed, quite openly, by a significant number of people looking for a light-hearted and no-frills shooter. If the girls were burly manly men and could break a zombie’s neck just by looking at it, of if the game were, say, Earth Defence Force, which is by the same publisher in Japan and has remarkably similar mechanics at times, Tamsoft and Aksys could well have had a sleeper hit on their hands with the mainstream.

This, of course, makes that pile of writhing, rotting flesh easy pickings for the girl to fill them with lead. She might be wearing nothing more than lingerie now, but she ain’t droppin’ that gun. This uniform strip is provides a massive benefit that, used at the right moment, will make any mission quite easy to complete. The only downside is your girl will need to go through the rest of the mission in nothing but her bra and panties. It’s not a trick you get to repeat over and over again. 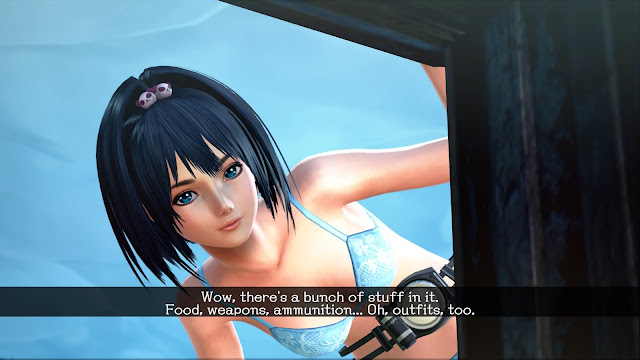 I’ve argued in the past that developers of these kinds of games often make their approach to the game subversive in some meaningful manner, or use the ‘perverse’ content to offer social critique. I’d happily argue all over again that the likes of Gal*Gun, Dead or Alive, Hyperdimension Neptunia, and etc, are making a point of their ridiculous fanservice.

I could probably do it again with School Girl / Zombie Hunter. I could sit here and argue that the game shares something in common with George A. Romero, who invented the whole modern zombie thing, and did so to make a scathing criticism of a whole range of political topics with his films. to Romero, the zombies were metaphoric for the worst impulses in people. So when, in Dawn of the Dead, all the unthinking zombies converged on the shopping mall, it was Romero’s way of making a cynical point on the relationship that we have with consumerism.

So I could argue that, taking a cue from Romero, there’s commentary in School Girl / Zombie Hunter in the way the zombies clearly have a school uniform fetish. Give me a bit of time to sit and think and I’ll come up with all kinds of angles – just off the top of my head I could argue that there’s something in the fact that the zombies aren’t actually interested in the girls. They ignore the now nearly-naked girl because it’s the uniform they’re chasing, and that would be poignant, because there certainly is an interesting conversation to have around the use of fetishes in games. The salivating hordes of unthinking monsters could easily be a pretty amusing metaphor for the whole fanservice market. 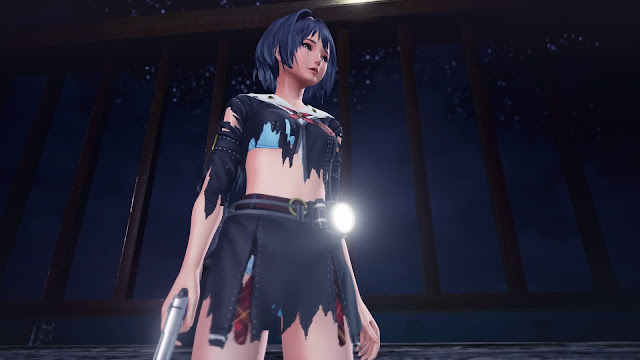 But I’m not really going to argue those things, because I so think in this case the point was simply to be so ridiculous that you can’t help but laugh along. The characters are not designed to be titillating; they look far too much like plastic mannequins for that. Tamsoft knows how to make far more traditional and sexy characters, and has done so in other games in the past, so the aesthetics in School Girl / Zombie Hunter are deliberate, and I would suggest it’s to separate them far enough from actual humans to be ridiculous. Further, the ridiculous, generally poorly acted dialogue and storytelling places the game so firmly in the B-grade trash exploitation tradition that you’d just have to hope that it was impossible for anyone to take any of the nonsense seriously.

Related reading: Tamsoft has also developed a number of games in the Hyperdimension Neptunia franchise for Idea Factory. Here’s a review of the most recent of those.

Of course, people will take it seriously. People will look at this game, call anyone who has the audacity to enjoy it a “pervert,” and then go back to playing Call of Duty: World War 2, as though that game’s very earnest attempt to tell a serious story is wholesome and “just good fun.” It’s just going to happen. It’s unfortunate, because the game and its players don’t deserve that, but it’s going to happen.

I know which game I’d rather play. School Girl / Zombie Hunter is not the longest game, which makes it ideal for quick bursts of fun. It has a brilliant little gameplay loop that certainly has its bugs and low-budget irritations, but never stops being utterly entertaining. Throw in the most perfect take on trashy B-grade horror that I’ve ever seen in a game, and there are not many other games released this year that I’ve had more fun with than this one.

The Fast Five with Terry Burdak: lead designer of Paperbark