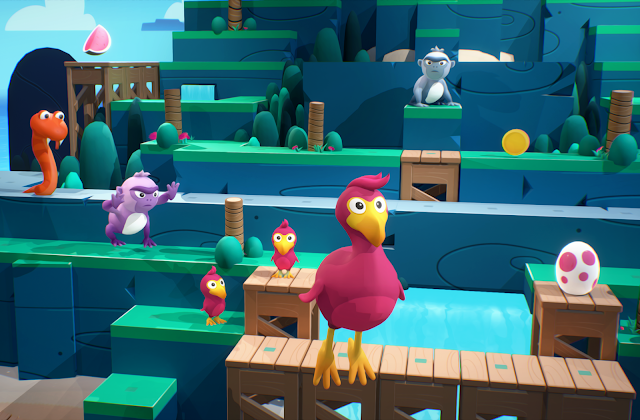 Dodo Peak isn’t the kind of game that you’ll remember six months down the track. But it is the kind of game that you’ll come across randomly when browsing through your library of games, remember that you actually really enjoyed playing it, and load it up again for a solid session or two. It’s also a game you’ll find yourself circling back to when you’ve got a quick ten minutes to kill on the train, or when you’re at the bottom of a bottle of wine and really not in the mood for playing anything that will make you think. There’s a place for stuff like Dodo Peak, is the point here, and Dodo Peak does a particularly good job of it.

You play as a Dodo mum, who needs to hop around a series of levels, rescuing her chicks and herding them back to an exit. If any of them – mum or chicks – gets hit by an obstacle, it’s an instant level-over. That would almost sound like a recipe for frustration, were it not for two things: firstly, the levels aren’t overly challenging (aside from the “daily challenges” – more on that later) and the difficulty curve is gentle. Secondly, a level is typically less than a minute long, so needing to replay it isn’t a real concern.

The levels are laid out like a modern version of Q*Bert, which is appealing, because Q*Bert is excellent and quite possibly the most under-appreciated “classic gameplay formula” of all. There’s a nice range of different enemies, and the variety of worlds to explore is decent, too. The developers have put a lot of effort into making sure the world is bright, colourful, and vibrant, and anyone who has enjoyed things like Crossy Road will find everything from the moment-to-moment play and aesthetic highly engaging.


Of course, Dodo Peak is also filled with mobile game-like mechanics, because that’s how all casual games seem to be these days. Each level rewards one to three stars, with extra starts being earned based on hitting a par time and nabbing optional collectibles along the way. The chief reward loop is in earning in-game coins that can be used to purchase additional costumes for the bird. These costumes have different speed ratings, so if you’re going for all the stars picking the “fastest” costume is a good idea, but generally speaking, the costumes are a cosmetic bit of fun allowing you to dress your dodo up in some wacky things.

The daily challenge, which I mentioned earlier, is where the real longevity rests for people who are going to get hooked on Dodo Bird. These are particularly challenging puzzles, with a leaderboard to compete on for recognition and props across the Dodo Bird community. Now I can’t see this game becoming an esport any time soon, but we all know that good leaderboards are essential for arcade titles, and this one cuts no corners with its own ranking system. In fact, there are individual leaderboards for every individual stage, as well as friends list ranking filters. I am certain there will be people that get hooked on the game enough to really make the most of these features.

They’ll get hooked because Dodo Peak plays really nicely. I know the knee-jerk response to any mobile game-like “cute and charming arcade experience” is to assume it’s some kind of cheap shovelware, but Dodo Peak is precise, clean action, with well-designed levels that straddle the line between encouraging creativity among players and giving them a specific range of different puzzles and logical traps to overcome. It’s bright, cheery fun that people of all ages can enjoy, and is something well suited to the Nintendo Switch platform. You could go much, much worse than giving this a spin.

Developer Q & A: On the making of Final Fantasy Crystal Chronicles Remastered Edition