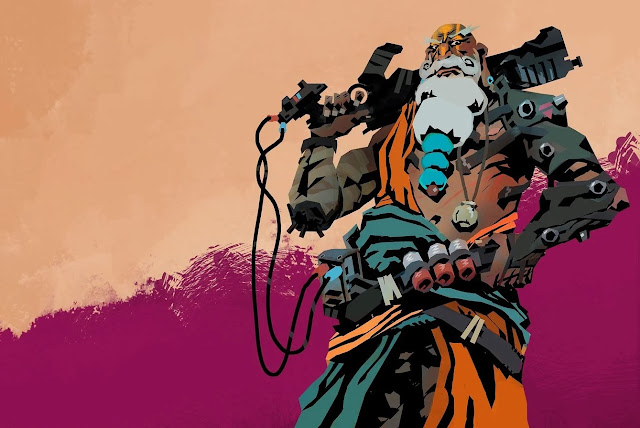 Digital card games and roguelikes have become rather hip in the indie scene, so much so that a game like Nowhere Prophet by German studio Sharkbomb Studios feels more like a follower than a leader. And while I do absolutely want to take the developer on his word for it when he says work on Nowhere Prophet began in 2014, well before the current ecosystem we see in the indie space today, it’s just so hard to isolate mechanics from this game and discuss them without making links to other games. Since while deckbuilding, power/toughness cards and rogue-lites aren’t in themselves derivative concepts (I’d say they’re more elements of game design which are fair use for developers to iterate upon), the recent and very lasting success of games like Slay the Spire, FTL: Faster Than Light and the digital resurgence of dozens of Magic the Gathering-likes means that my initial response to Nowhere Prophet’s setup was, “oh, I’ve seen this done before.” I hate to say it, but it feels like an X-meets-Y type of game. Namely, it’s Slay the Spire meets Magic: the Gathering with a little bit of Darkest Dungeon and Into the Breach mixed in.

And there’s nothing specifically wrong with X-meets-Y design if all the elements come together. One of the frustrating things of reviewing games is that it’s impossible to take any new game in a vacuum; if another developer beats it to the punch with a similar idea, comparisons are going to appear. And I think, at least on my own terms, it’s because I’ve seen these design ideas iterated in different and more focused ways in other games that I had trouble enjoying Nowhere Prophet.

This game suffers from a complexity problem, where there is a vast amount of detail with little guidance to help the player navigate it. It’s a similar problem which I think plagued the launch of Artifact: both it and Nowhere Prophet are games where the player is constantly making choices and sacrifices, the ramifications of which aren’t going to be immediately obvious, but can eventually snowball into a game-ending situation. In Nowhere Prophet, players start with two preset decks – a convoy deck filled with “followers” and a leader deck filled with spells. For those familiar with Magic or Hearthstone, it’s as if the creatures and the spells get separated into two decks, and players draw a card from each at the start of their turn. Then, players get to spend a mana-like resource (growing in a cumulative manner like in Hearthstone) on whichever cards they want to play. 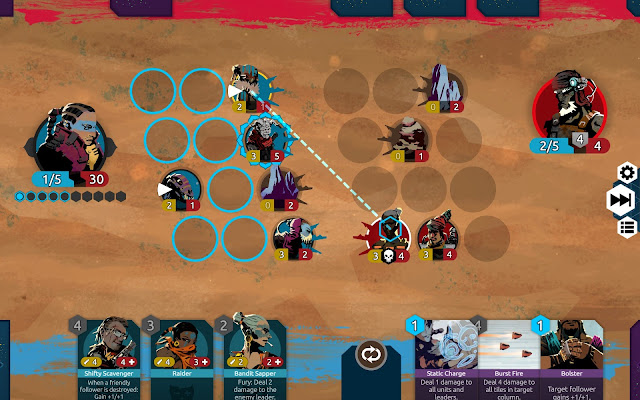 Follower cards are creatures and are placed on a 3×4 grid. They can’t move once they’re plonked down, but their position is important; only the followers closest to the opponent can attack unless an ability says otherwise. This does lend a little bit of strategy; you’ll want to put your beefier or stronger cards upfront, whereas weaker cards that you play for their enter-the-battlefield effects or other abilities, you might want to put behind some defenders so they’re not vulnerable. Players can also attack the opponent’s followers or the opponent’s life points directly, but they must clear followers with the “Taunt” ability first. Combat works in the MTG/Hearthstone fashion, with power/toughness numbers and both units dealing damage at the same time.

The main difference between those games though is the turn-order system, which is where the Into the Breach comparisons arise, and where the complexity problem starts to rear its head. Players can play cards and attack with followers in any order they choose, as long as a valid move is possible. Once every legal move is made – once all the energy is spent and all cards which can attack have done so, the player passes the turn to the opponent who then gets to set up their field. Just like with Into the Breach, where each turn is something of a puzzle; figuring out how best to sequence your moves to get the best outcome is the core of Nowhere Prophet’s individual turns. In longer battles where you might have half a dozen followers on the field, this can quickly get messy, and I usually ended my turns knowing that I didn’t make the perfect or optimal choices.

This combat system would be complicated enough on its own, but Nowhere Prophet compounds things by adding its rogue-lite deckbuilding system where cards are slowly acquired across the course of an ongoing journey. The Slay the Spire comparisons are apt here; cards are selected and purchased from small pools at stores or outposts on the world map, and the limited choices force players to build decks around a theme, and be opportunistic about their picks. Unfortunately, Nowhere Prophet’s cards have something of an Alpha-set identity; at the start, you’ll mostly be messing about with vanilla or single-keyword cards, which just aren’t interesting enough to build any kind of synergy around. It’s also frustrating to re-learn keywords which have the same effect in other games; eg. “Fury” is the same as “Battlecry” in Hearthstone. This game does have its fair share of unique mechanics too, but it’ll be some time before the player gets access to those, and even then, they don’t synergise with each other quite as neatly as the cards do in, say, Slay the Spire. 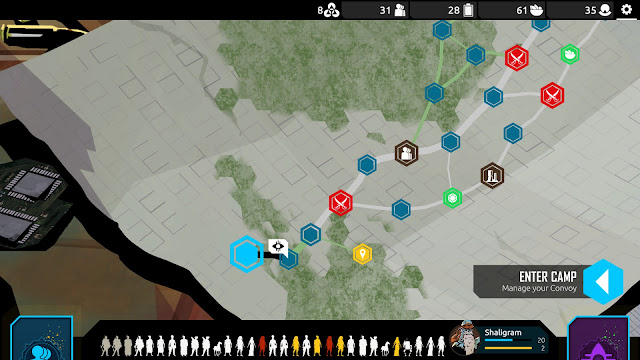 By mixing together a true CCG-style battle system with the roguelike sensibilities of Slay the Spire or Darkest Dungeon, Nowhere Prophet constrains players to only rather uninteresting decks due to a limited card pool and an escalating challenge level which forces decks into certain playstyles. There’s also an additional mechanic where cards which “die” in combat get given a wound, which reduces stats and casting cost in subsequent battles, but also forces them to be removed permanently if they die again. It, like many other pieces of Nowhere Prophet, effectively added superfluous complexity – it was deeper than it needed to be, making any and every choice feel sub-optimal, and not in a narratively relevant way like in Darkest Dungeon. I felt that I never quite found the wild creativity of a CCG like Magic or Hearthstone, and yet didn’t experience the robust strategy and compulsion of a true roguelike such as FTL either. The game is, unfortunately, just not that satisfying to play.

The actual standout factor which kept me interested in Nowhere Prophet, surprisingly, was its story. The game is set in a post-apocalyptic world heavily influenced by Indian culture and mythology, and so there’s a layer of refreshing unpredictability to what otherwise could have been another standard sci-fi setting. I particularly liked how the use of colour in the artworks and enemy designs kept the encounters feeling different to most other games on the market. But also, the writing in the non-combat encounters are top-notch: there’s decent prose to describe the various locales the heroes traverse, and the various enemy factions get their fair share of characterisation too. It reminded me fondly of the Hand of Fate games, which also had problems with a fairly modal combat/role-playing split, but carried themselves on excellent writing. I think Nowhere Prophet focuses a little too heavily on the combat mechanics to be taken seriously as a narrative experience, but what is there is effective.

I do say my criticisms with a grain of salt; I have definitely under-appreciated many roguelikes in the past, only for them to “click” much further down the track on a repeat play. At this point, I feel like I get the gist of where Nowhere Prophet is going, and I think for genre fans who grow weary of the old mainstays of Into the Breach, Slay the Spire and FTL, there is a familiar compulsion to the way Nowhere Prophet’s systems are constructed, even if they often pale in comparison to games which came before. If there’s anything to be learned from Nowhere Prophet, it’s that a successful rogue-lite is like intricately designed lightning in a bottle, and no amount of mechanics which look good on paper can recreate a truly well-planned experience.

Celebrate 20 years of Dynasty Warriors with this video!