Disgaea 4 Complete+ is set to launch on PC for the first time, courtesy of publisher NIS America. It is developed by Nippon Ichi Software. This version of the game initially launched on console (PlayStation 4 and Nintendo Switch) last October. The PC launch should be around the same time, with NIS America promising it will be available this fall (or spring for all you folks in the throws of winter in the Southern Hemisphere). It will be available via Steam and the Microsoft Store, as well as included with Xbox Game Pass for PC. You can read our 2014 review of the original title for PS Vita here.) And here’s the announcement trailer for Disgaea 4 Complete+:

Valvatorez is a former tyrant who has to make new allies with the Corrupternment threatens the Hades way of life. He’ll form an army, learn about political unrest, and hopefully take down the regime altogether. It’s a redemption story for Valvatorez. Set in realms that include creatures like vampires like Valvatorez as well as werewolves and other devilish beings, the new army will engage in tactics-based gameplay (one the best kinds, no?). Our dear hero may even find love in the process.

The big question here: can you reach level 9,999? There will be loads of help available and battles to fight, as Disgaea 4 Complete+ has over 30 unlockable characters and extra story campaigns. Post-launch (no release date yet) more goodies will be made available. There’s a map editor, multiplayer pirating, a Netherbattle tournament, and ranking battles (themes rotated weekly).

Labyrinth of Galleria is finally set to launch in Japan

Originally due out on July 25, 2019, with a handful of delays between then and now, RPG Labyrinth of Galleria: Coven of Dusk from Nippon Ichi Software is ready to launch later this year in Japan. It will be available on November 26 for the PlayStation 4 and yes, even the PS Vita! Fingers crossed it’s actually ready this time, although the developer seems quite certain. There will be four editions available for each system: digital, physical standard, and physical limited. 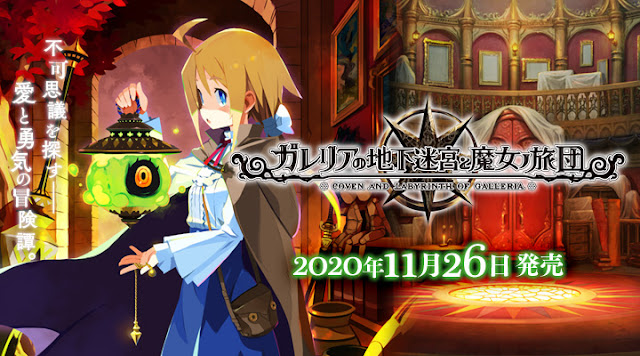 Experience the story of the Witch Brigade once more, in this sequel to Labyrinth of Refrain: Coven of Dusk. The player takes on the interesting role as the Necrolamp, owned and directed by a witch named Madame Malta. Necrolamp will have to follow her command to make their way through an underground labyrinth full of mysteries. Necrolamp controls magical beings, puppet soldiers, who aren’t quite human but also not quite beast. Together, they form the Witch Brigade.

Labyrinth of Galleria: Coven of Dusk has some pretty big names attached. The director and scenario writer is Tatsuya Izumi, who worked on The Witch and the Hundred Knight as well as the Labyrinth of Refrain: Coven of Dusk games. Character design is by Takehito Harada, who also worked on The Witch and the Hundred Night, but is perhaps most known for his extensive work on the Disgaea series. The music is by Tenpei Sato, who has worked on the same series as Harada.

The first summer update launched last month, and now Nintendo is ready to add even more to Animal Crossing: New Horizons, exclusively on the Nintendo Switch. The update will be available on July 30 and include three new features: fireworks, dreaming, and island backup/restoration. Here’s the trailer:

Fireworks shows will light up the sky every Sunday in August, at precisely 7 p.m. Redeem beers for raffle tickets to win prizes, or make a custom-designed firework that will grace the night sky. Dreaming is familiar, as it was a feature in Animal Crossing: New Leaf for the 3DS. This time you can nap at home, but Luna will still be around to greet you as you doze off. With Luna, you can receive a dream address to share with other players, or input their dream addresses to visit their island. The nice thing? Dream islands are simply dreams, so nothing is permanent and nothing is saved. It’s just a way to visit.

Island backup and restoration has been shouted for since New Horizons released, along with the ability to transfer islands to a new Nintendo Switch. With this update, we’re halfway there, and the backup/restoration will be available for Nintendo Online members. Island and user save data is uploaded to Nintendo servers and specific times of day, so if you lose or break your console you should be able to retrieve the backup… but you’ll have to contact Nintendo Support. The remaining feature, the ability to transfer islands to a new system, should be available later this year; however, Nintendo has no updates past that at this time.

Dragon Quest Rivals will be rebranded next month

Square Enix has announced that next month, mobile free-to-play digital card game Dragon Quest Rivals will be rebranded as Dragon Quest Rivals Ace. The game is available in Japan for the Nintendo Switch, PC, iOS, and Android. Here’s the teaser trailer:

Aside from the rebranding, one major change is about to take place to the game: the addition of a single play mode titled Solo Battle Adventure. Up until now, the game has been strictly multiplayer, so this is a really welcome feature. The first in the Shin series of card packs, Heroes of Triumphal Return, will also be available at the time of rebranding.

Unfortunately, that’s really all the information we have to date, but there’s good news: Square Enix will host a live stream titled Rivals LIVE! Vol. 1 via its YouTube page on August 6 (20:00 JST). It is then that more will be shared, including an in-depth explanation of single player mode, a look at the cards in the new cardpack, and some live gameplay.