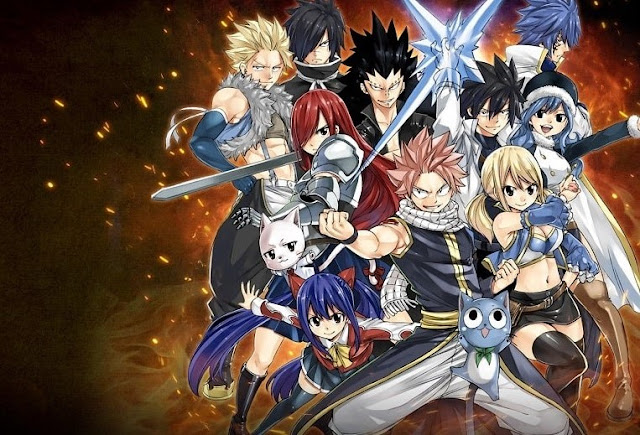 I have been looking forward to this. Gust, the developer behind the Atelier series and Blue Reflection, might operate on shoestring budgets, but the developer understands the classical JRPG form and delivers, without fail, every time. Meanwhile, Koei Tecmo, Gust’s parent company, has a long history in licensed anime titles. Sure, most of them are Musou action games, but the company has that track record of respecting and enhancing the base property. On this basis giving Fairy Tail to Gust rather than turn it into another Musou title was intriguing indeed.

I also didn’t know much about Fairy Tail going in. I’ve never seen the anime, nor read the manga. When I heard that Gust was doing this game I could have gone and caught myself up, but then I realised that it would be just as interesting to go in blind. Where a Musou title can get away with being vague on the narrative because players just want to get on with the action, a JRPG is a different beast. It’s entirely narrative-driven, and if Gust was going to do well with this game it was going to have to figure out a way to make a franchise newcomer like me understand and appreciate not just the characters and action, but the underlying story.

The results are mixed. Fairy Tail does cover a lot of ground within the manga and anime and so, of course, it can’t possibly provide a complete narrative in the span of a single game. Instead, we get the crib notes version – a scattershot approach where the team have chosen key moments and scenes and builds cut-scenes around those, while relying on very little to bridge the gaps. There is assumed knowledge, and none of the characters get the full fleshing out that they have in the other media, but Gust has succeeded in building something that makes sense to someone who has never experienced the series before. There are moments which sat right at the hard edge of my ability to fill gaps and comprehend context, but in the end, I did come away with an appreciation of the characters and their quest. 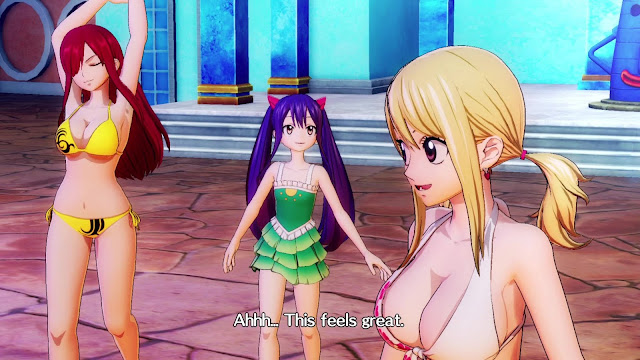 This is especially impressive given how much of a budget the game was clearly built on, and how transparent it ends up being about that. There are a bunch of characters – including important ones to the core narrative – that don’t have character models made for them, and instead simply have their comments pop up in a dialogue box. I’ll give you a good example of this: five or so hours into the game you meet a rival guild, which features three characters. Two of those characters you’ll shortly battle, and they have character models that represent them in the cut scene. The third doesn’t participate in the combat, and though she has every bit as much to say in that scene, she only appears as the little portrait image in the dialogue box.

I know this sounds like Gust is cutting corners to the point of being cheap, but in the areas that really count Fairy Tail is meticulously detailed. Each of the major characters has a wide range of flashy attacks, all modelled with the over-exuberance of a Final Fantasy special, and outside of combat have some lovely animations and design elements that really help to build personality with those characters that are important enough to be modelled. There’s a bit of palette-swapping that goes on with the enemies, but they’re also lovingly detailed, and environments, while small, have the same warm, inviting aesthetic and tone that the Atelier series has. The end effect is a bright, personable JRPG, and something that does seem to capture the essence of Fairy Tail nicely.

In other ways, the efficiency of Gust’s approach really benefits it, too. There’s something decidedly simple about the rhythms of Fairy Tail, as though you’re playing a SNES JRPG that’s been remodelled into 3D. Quests flow by quickly, and the turn-based combat, while not overly difficult, gives you plenty of opportunities to use the expansive roster and range of attacks. There’s also some excellent flow in that combat, with characters able to back one another up and combine attacks in a way that creates something as dynamic as we’ve ever seen in turn-based action (something that Gust has mastered over the years with the Atelier series, but dialled right up in Fairy Tail). Even the palette-swapping comes across as something quaint rather than cheap, as another throwback to a bygone era of JRPG design. There have been many attempts to recapture the magic of old JRPGs, but those often fall down in some critical areas; most significantly, they often try and tell a more expansive narrative with longer cut scenes and inter-character discussions than those classics actually did. Fairy Tail doesn’t do that. It genuinely feels like a homage to retro JRPGs, but without the pretentious press release telling us all how much the developers loved growing up with Final Fantasy or Dragon Quest. 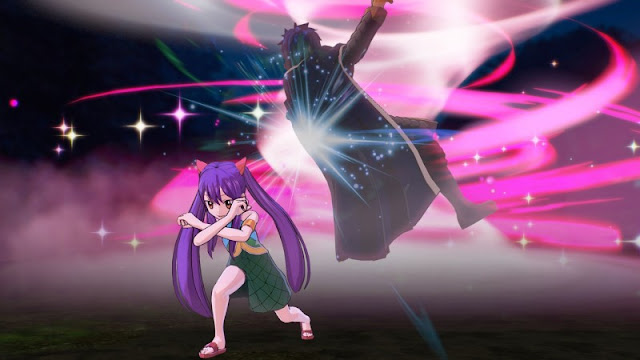 Thanks to this approach, you can play Fairy Tail in short bursts and feel like you’re making good progress, because this game really does respect your time and is over before certain other JRPGs even get started. It gets everything it needs to do done, too. One of the best things about Fairy Tail is the relationship system and all the character-specific story arcs that you can enjoy (yes, Persona, it’s possible to do this without chewing up a few weeks of non-stop play). At certain points, you’ll be able to undertake short little stories for each of the characters in the party. Doing so builds the bonds between the team and allows you to access higher-level skills for those characters, but that’s almost secondary to how much fun the game has with it all. Between those little stories and the numerous quest board items that are more narrative-driven than monster hunting, Fairy Tail plays interactions for laughs and nonsense, which, I would assume, is signature for the series.

It’s also very fanservicey, and that too I assume is par for the course. You can tell that the game was positively itching to get through the tutorial basics so it could throw the characters into a bikinis-and-beach scene as quickly as possible (perhaps the first three or four hours), and so many of those aforementioned funny side quests involve chasing down monsters that are stealing women’s underwear, helping Wendy overcome her flat chest complex (FIJ, Wendy. We love you the way you are!), and other similar scenes that are oh-so-juvenile and yet oh-so-charming.

Fairy Tail is pure comfort food for people who, like me, count the JRPG as the favourite genre. It lacks the subversive intelligence of a NieR: Automata or Final Fantasy VII Remake. It also lacks the rich refinement of a Persona 5 or the epic scope of a Trails of Cold Steel. Even in comparison to Gust’s own titles, it lacks the rich character development of Atelier or the sheer beauty of Blue Reflection. But Fairy Tail has one thing in spades; it’s joyous, and it’s the right kind of frivolous. It’s a celebration of an anime that I can only assume is both silly and fun in its own right and that works as the perfect promotion for Fairy Tail: I really want to watch the anime now. Fairy Tail isn’t going to be on any of my game of the year lists, but not every release needs to be pitched at those lists to be well and truly worthwhile. Fairy Tail being the game that reminded me why I loved JRPGs in the first place is more than enough.