TGS was one of the many smart organizations to cancel massive in-person events in favour of an online experience, and several months ahead of the conference to boot. Tokyo Game Show 2020 Online will be held from September 23 to 27 via the TGS website.

My interest lies in the time from September 24 to 27, when companies from the games industry will unveil the latest titles, updates, and services to be launched in the future. Expect a variety of announcements, from indie to AAA devs and major publishers. These streams will all be available for the Official TGS channel as well as its website. In addition to the announcements, TGS will live stream e-Sports tournaments and host roundtable discussions on various topics currently relevant. And all of the above is free to enjoy!

About the change to online, TGS writes in a statement, “the online world is a diverse space where people from all over the world can connect with each other beyond physical distance and time barriers in real time. Games have a possibility to cross the boundaries of games themselves and change our future in various fields. With the evolution of technology and the power of games, even more exciting future is just around the corner.”

Last week, Square Enix revealed a good amount of information regarding Final Fantasy Crystal Chronicles Remastered Edition, including a new trailer and the announcement of a Lite version of the game. Both versions of the game are due out digitally worldwide for PlayStation 4, Nintendo Switch, and mobile devices (iOS and Android) on August 27. In Japan, there will also be physical editions available for PlayStation 4 and Nintendo Switch. But on to the new information! Here’s the latest trailer:

The Lite version is free-to-play, and includes the first three dungeons in the game, online cross-play in those dungeons, and the best yet: the ability to join in with a player who owns the full game to play across all 13 dungeons available. Save data can be transferred between the Lite version and the full game, so if you want to purchase the title and continue you won’t need to restart. Both versions will be launched on the same day.

Final Fantasy Crystal Chronicles Remastered Edition will includes many gameplay enhancements to make it, and I quote, “more memorable” than the original (which I had a great time playing). The biggest feature addition is Mimic, which allows players to take on the form of various characters that they have met along the way. There are also UI improvements, increased material capacity, a mini map, high difficulty dungeons that unlock after completing the main game, and an updated soundtrack with newly-recorded songs. Those who play multiplayer will enjoy a quick chat features to give text-based instructions during battle, and a magic timer to help synchronize attacks.

Get ready for the first New Horizons summer update

Nintendo has announced that it will release two free summer updates for Animal Crossing: New Horizons, the first on July 3 and the second later in the season. The game is currently available for the Nintendo Switch, and quite honestly people haven’t shut up about it in months (although sometimes I question the integrity of this iteration of the franchise). So let’s not waste any time, and get to the first update’s trailer:

The biggest addition, arguably, is swimming and diving. Players can finally grab a wetsuit to swim and dive in the clear waters around the island. Underwater creatures will be available to catch and donate to Blathers, so keep your eyes peeled! Swimming was one of my favourite parts of New Leaf, and I was surprised it wasn’t originally included in New Horizons… but better late than never, I suppose?

There are also new (well, “new”) characters to talk to. Pascal loves scallops, and if you find one, he may ask for it. To thank you, he’ll share recipes for mermaid-themed furniture. Gulliver will also sometimes be found washed up on the shore, this time in a fancy pirate costume. Help him out, and he’ll send you a reward.

Developer (and self-publisher) Qureate will release its love-adventure title TroubleDays on the Nintendo Switch via the eShop on July 9 in Japan (although it also supports English and Chinese languages). The game originally launched for PC via Steam this February, but let’s be real, having any game available on the Nintendo Switch instantly makes it more appealing. 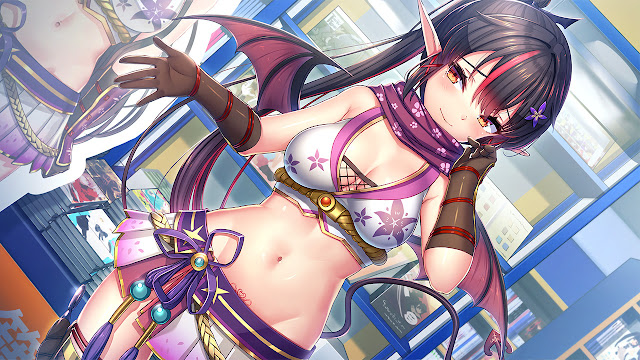 The main character, a male, has been targeted by a succubus named Lovelia. Lovelia is trying to steal his lust’s power, but she’s just too innocent to succeed. She’s known as a great beauty, but she is still young and naive when it comes to men. Until she successfully harvests what’s referred to as “technoforce” from the main character, she will be stuck in this world, unable to return home and unable to even possess another man.

The game uses an “e-mote” engine that moves illustrations smoothly, making characters appear alive. And since, it turns out, Lovelia has a habit of very naughty fantasies triggered by just about anything, the more alive, the better!