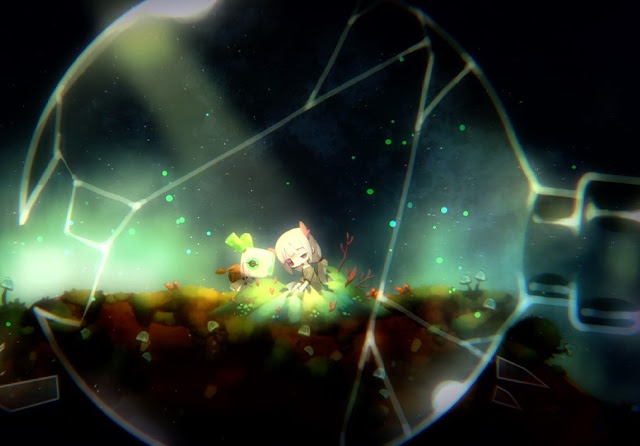 Void Terrarium (ignore all the nonsense in the title – this is what the game’s name is) is a Mystery Dungeon-style roguelike, and if that immediately makes you roll your eyes a little, I’m not surprised. There’s already a half dozen (if not more) of that exact kind of game on Switch already, and between Chocobo Mystery Dungeon and Pokemon Mystery Dungeon, the console’s already well-covered for the very best quality examples of it too. There’s even a Shiren the Wanderer on its way, as the grandfather of the genre. However, don’t dismiss Void Terrarium just yet. It has some pretty high impact ideas up its sleeve.

The game is the latest brainchild of Furuya Masayuki – a maverick talent that Nippon Ichi discovered through The Firefly Diary and A Rose In The Twilight. In Void Terrarium, Furuya has broken away from his puzzle-platforming roots, but nonetheless, this game is very much identifiable as his. He blends a kind of sweet melancholia with a capacity to shock the brain through some heavy themes, and his creativity is quite unlike anyone else out there.

The Furuya touch is exactly what the Mystery Dungeon formula needed: someone capable of playing within the genre while disrupting it, and by doing so Void Terrarium completely sidesteps the risk of being seen as “just another roguelike” alongside its peers. Think back to any roguelike you’ve ever played. The goal is to go as far as possible, correct? A roguelike features a number of dungeon levels, or stages, and you need to traverse as many of those as possible in a single “run” until you either reach the end, or a monster KO’s you and you’re sent back to the start. Void Terrarium’s great trick is that it will force you to end your run early, just about every time. In other words, you’ll be forced to “KO” yourself, and like with any other roguelike, lose all the progress you just made as a result.


This is done in service of the central theme; the relationship between a robot and his ward. Void Terrarium takes place in a post-apocalypse setting. Humanity has been wiped out thanks to a combination of a malignant fungus and something dramatic done by an AI that at first we’re not privy to. We play as Robbie – a cute little robot that wakes up to find he has nothing left in his memory drives, but quickly comes across a lonely AI and a little human girl, who has somehow survived the catastrophe. Robbie sets out to nurture this girl, since she can’t leave the giant glass terrarium she resides in without being at risk to the fungus.

The thing is though, this girl needs food to survive, and her hunger meter grows as Robbie searches nearby dungeons filled with hostile enemies for uncontaminated food scraps and resources that he can use to build her a bed, toys, and other luxuries to give her a good life (as far as that is possible). As a result you’ll regularly be deep into a great run, with a really well-levelled Robbie, only to have to self-destruct and retreat back to the terrarium to save the girl from starvation. At which point you then start again at the top of a dungeon, at level 1.

If this sounds like a frustrating loop to you then it probably will frustrate you. It’s a bit like having a favourite song simply cut out mid-play. It seems to be part of the normal human psyche that we have a desire and need for completion, and yet Void Terrarium actively resists that – it’s almost like it’s deliberately trying to frustrate us by denying is that very human desire. But it’s not without reward either. The bond between the girl and the machine is silent (as neither can actually speak), and yet it’s poignant, with tiny little interactions between the two (such as Robbie bringing her food) being presented in such a way that it’s more than enough to create a strong sense of bond between the two. It’s that melancholic kind of “beautiful relationship” that is almost gothic in tone, and this theme and central motif are only enhanced by the sacrifices that the game asks you to make in service of it. For a creative director that’s only helmed three projects, this is vintage Furuya stuff. He deserves to be noticed for his ability to find meaningful ways to undermine the very fabric of the genres he’s representing. 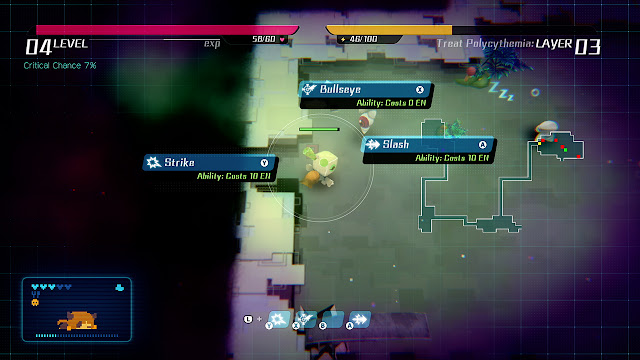 The other main relationship in the game is with the talkative AI, who comes across as desperately lonely and guilt-ridden for their role in the destruction of humanity (to be learned as the narrative plays out). Void Terrarium finds a sense of bitter, lonely humour in the interactions between Robbie and the AI, which only goes to further deepen the feeling of melancholia that you’ll have while playing this game. It stops short at misery, though – melancholia and misery are two different things, and there Furuya balances on this tightrope with expertise. If it were miserable you just wouldn’t care, but here, if anything, you’re encouraged to care too much.

The actual gameplay is very rote Mystery Dungeon, and that’s not to criticise it, since the Mystery Dungeon formula is well-established, familiar, and loved for good reason. Dungeon layouts are randomised, and that also means random enemies and loot. The levelling system also includes an element of randomisation, as with each new level you’ll be asked to choose between two skills, which can be rated from one (low) to five (high) stars in quality. Sometimes the virtual dice will be entirely against you and you’ll be knocked out early on, but at other times you’ll have luck really go your way and that will make the self-KOs all the more painful. Robbie starts each dungeon crawl fresh, though depending on the point you’re up to in the narrative you’ll have some permanent boosts that make the crawl that little bit easier from the outset.

Void Terrarium is a gorgeous game. It’s not particularly complicated from the technical perspective (isometric roguelikes never are), but the aesthetic direction is spot on for hitting and enhancing every melancholic note. Outside of the dungeons the perspective shifts to a 2D side-on view, and the subtle little animations go a long way to giving characters personalities in an otherwise quiet and introspective experience. Somehow the music, which aims to emphasise the “robot” theme, also fits in as electronic moodiness dialled up to 11, rather than coming across as the bad science fiction soundscape it could have easily been. 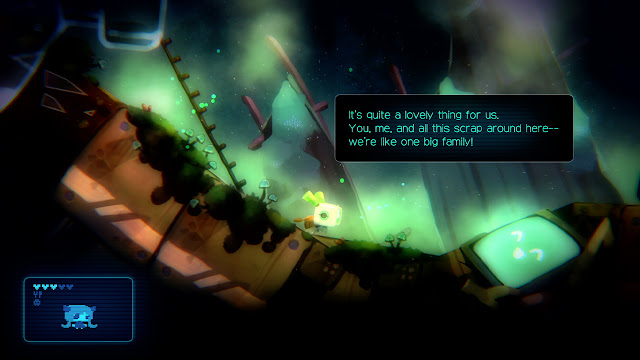 I went into Void Terrarium a little apprehensive. With every indie out there scrambling to call their game a “roguelike”, and with so many Mystery Dungeon roguelikes on the Nintendo Switch already, it can be difficult to muster up enthusiasm for yet another one. NISA and Furuya Masayuki surprised me, though. From the gentle subversion of the nature of progress in roguelikes, to the razor-focus on a sweet, paternal-style relationship between a robot and his ward, told with minimalistic elegance, Void Terrarium is a mature, different, and interesting take on the genre.