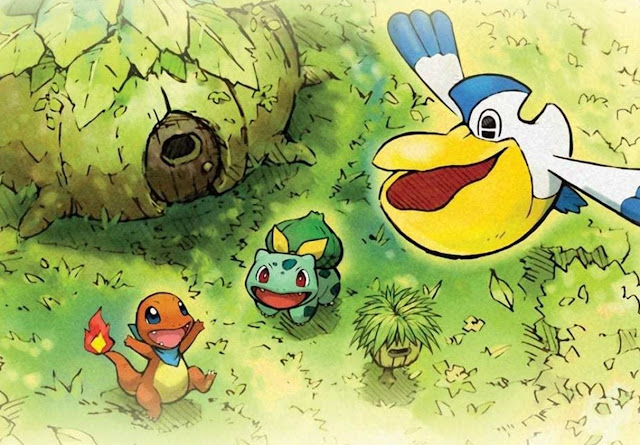 If I were to ask everyone reading this to raise their hands if they are thoroughly sick of the roguelike genre being appropriated by indie developers to replace the joy of finely crafted levels in favour of randomised “endless” content, I would imagine that most people would indeed raise their hands. The roguelike is to indie developers what stupidly big open worlds are to AAA-blockbuster developers, and it’s every bit as exhausting to come across yet another one. Ironically, however, the original roguelike – the Mystery Dungeon formula pioneered by Chunsoft (now Spike Chunsoft) so many years ago – is the exception to the rule and it is anything but exhausting to play one of those. Chocobo’s Mystery Dungeon on the Switch last year was an absolute delight, and this here Pokémon Mystery Dungeon: Rescue Team DX, is much the same.

Related reading: Our review of a previous Pokémon Mystery Dungeon title released on Nintendo 3DS.
It’s the simple charm that lets these games get away of being the very definition of a typical roguelike. Chocobo Mystery Dungeon has the titular yellow duck/chicken who just never stops being charming, and Pokémon Mystery Dungeon has… well, Pokémon. The entire reason that Pokémon has become such a massive media property is that the critters are adorably simple, and the great thing about being such a basic implementation of the Mystery Dungeon formula is that Rescue Team DX here keeps the focus firmly on those critters. Dungeons come and go in a barely noticeable whirl but Psyduck… well, Psyduck is forever.

As a remake of a Game Boy Advance and Nintendo DS title, Rescue Team DX modernises very little, with the exception of the art style. Rather than simply go for a like-for-like replacement of 2D pixel sprites with 3D models, the development team decided to get creative, with a bright, soft, watercolour-like aesthetic. It’s gorgeous on the eyes, and something that I would take over hardcore “realism” or those ugly and bold cartoon characters that make up most of the cartoons that modern children watch. I’ll never understand why developers want their games to look like that, because it’s universally cheap. But, I digress. The reality is that Pokémon is not exclusively a property for children any more. Quite the opposite, in fact. Much of the merchandise that you find for Pokémon in Japan is explicitly designed for people who have grown up with the critters, and Nintendo and Game Freak need to continuously balance out the need to draw new young fans in while keeping the old guard happy. Rescue Team DX is the perfect example of this balancing act in motion. It’s bright and wholesome, as you’d expect for a game that children will play. It’s also a mature kind of brightness that won’t come across as gaudy to adult eyes. 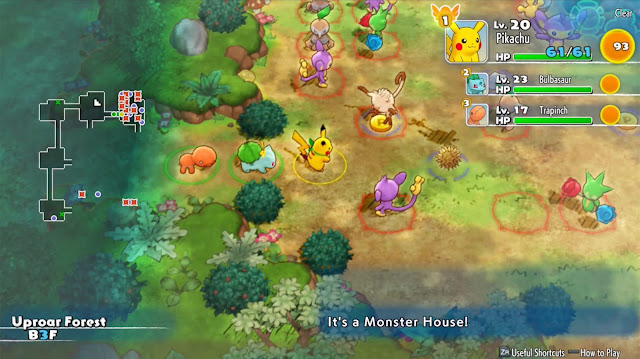 Rescue Team DX does almost nothing to deviate from the standard Mystery Dungeon format. Combat remains steadfastly turn-based, though in a nice nod to the traditions of the Pokémon series each monster has four attacks to choose between, each of these have strengths or weaknesses against particular types Pokémon types, and they all have a “PP” limit which, once run down, means the attacks can’t be used any more. As you adventure you can make “friends” with other Pokémon, and then bring them into dungeons to help you out. You can actually end up with a stupidly big party following you around, which becomes mechanically unwieldy, but it is a joy to watch all your favourite little monsters running around in a group.

It goes without saying that Rescue Team DX gets repetitive. The narrative is wholesome and good-natured, but limited and cut scenes kept short. Outside of the dungeons there’s not that much of a world to explore or distractions to participate in, and while the dungeons are vibrant and distinctive, because they are randomly generated, they are limited in what you’ll find in them. It’s not much more than loot in random spots, enemies flitting around, and, somewhere, a staircase to the next level. Perhaps what will turn many players off the most, though, is the way the roguelike punishes failure. If your Pokémon get wiped out in the dungeon, all the loot that they’d gathered up is lost. Rescue Team DX it by no means the most difficult example of the genre, but nonetheless people will grow tired of the punitive loop that characterises progression in a roguelike.

Not me, though. As a fan of Mystery Dungeon from right back in the Shiren the Wanderer days, I find that there’s an elegance to the formula that, when handled in a traditional manner, actually makes for a cleaner experience. It’s minimalist, as JRPG mechanics go, but chic and elegant in that, and, those times where the difficulty does spike, it becomes highly tactical. Sometimes, that’s really all you want from a JRPG, and without fail Mystery Dungeon titles have an ability to tap in to the nostalgic side of me. 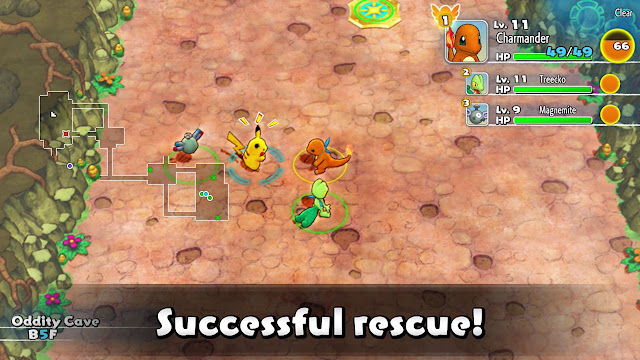 There are some minor irritations here and there – your allies and their AI can be far too dense to be enjoyable, and as the size of the party increases it’s hard not to wish for a more granular level of control over how they behave. Boss battles are never a highlight in Mystery Dungeon titles, thanks to the limitations and simplicity of the systems, and yet Rescue Team relies on them more than most roguelikes should. Most significantly, the side quest system has you doing the exact same thing you do in the main quests, and that very much comes across as an arbitrary, artificial feature to have you repeat dungeons even more frequently than you would otherwise. The grand sum of these mean that you do need to really enjoy your roguelikes to get much of a kick out of Rescue Team DX, and remake or no, it does feel like a GBA title to play.

Clearly this is one of those releases that Nintendo gets a developer to pull together on the cheap in order to keep the flow of first party games coming to the Switch. There’s no other explanation, aside from resourcing, for this being a remake of GBA title that wasn’t considered a classic in the first place, rather than a properly new project. The point is, Pokémon Mystery Dungeon: Rescue Team DX will be one of Nintendo’s most niche titles of 2020. With that being said, I fall squarely into the Venn diagram that makes the target demographic for this game, so I loved every second of it. As a fan of Pokémon, Mystery Dungeon roguelikes, and whimsical, light-hearted, and wholesome art styles, Rescue Team DX clicked with me on every level.

Review: One Punch Man: A Hero Nobody Knows (Sony PlayStation 4)