RPG Maker MZ is just about ready to launch

RPG Maker MV is finally making its console debut in September, but it’s about to be head off before it even launches… thanks to its successor. Developer Kadokawa Games and publisher Degica Games have announced the launch of RPG Maker MZ for PC via Steam and RPG Maker Web. It will be released on August 20 for $79.99 USD and support English, Japanese, French, Italian, German, Spanish, Portuguese, Russian, Simplified Chinese, Traditional Chinese, and Korean.

RPG Maker MZ is touted as the most powerful version of the popular game-making game, but considering it’s the most recent that isn’t quite a revelation. Every title in the series is designed to bring game development to the masses by providing loads of tools and assets to create what someone has always dreamed of, even if they’ve never coded for a minute of their life – although there is a plug-in feature that allows you to introduce new codes to the game. There’s a map editor that allows you to select tiles and “paint” them. The layer function has returned, you can now rearrange trees, and there is an improved save system. And there’s a character generator that allows you to create characters from built-in components that can be recoloured. There’s a database to track all the characters and the foes.

I don’t know about you, but I’m rather interested in Kandagawa Jet Girls. Cute girls racing through Tokyo waterways on jet machines? Genius! The title is published by different companies whether in Europe or North America (Marvelous Europe vs XSeed Games) but it will launch for PC via Steam and PlayStation 4 on the same day: August 25. North American players will have access to a physical edition, a physical day one limited edition, a standard digital edition, and a deluxe digital edition. Europeans, I’m sad to say, will only get the digital release, although there are three editions: standard, digital limited, and digital deluxe. To celebrate the news, here’s a new trailer:

Kandagawa Jet Girls pairs up drivers (“jetters”) with “shooters” loaded with water weapons, so the teams can race through the waterways both offensively and defensively, getting dripping wet the entire time. Going the fastest isn’t enough, though, as spectators must be wowed in order to win. Grow the boost meter with aerial stunts and by evading enemy attacks. There are seven two-girl teams, each with their own backgrounds and attributes, and 64 episodes in single-player stories. All teams’ outfits can be changed. There’s even a free mode when you can swap out a team’s member to create brand-new pairings.

Fans of Senran Kagura should expect some familiar faces in Kandagawa Jet Girls. Ryobi and Ryona were released as DLC in Japan, but will be available in the base game to Western fans. Post-launch DLC teams will include Asuka and Yumi, Ikaruga and Yomi (she’s popular!), Homura and Hikage, and Murasaki and Mirai; these can be purchased in individual pairs, or in a character pass that includes each couple as they are released.

I’m one of the many that did not keep their Apple Arcade subscription past the free trial, but I’m considering paying to access this title. Cinematic cel-shaded visual novel Necrobarista was already set to launch of PC on July 22, with PlayStation 4 and Nintendo Switch versions in the works, but surprise! It’s available now on Apple Arcade. Here’s the launch trailer:

A lot of my interest lies in the game because it’s apparently quite “uniquely Australian,” as described by the game’s Lead Designer. But it goes deeper than that. In an inconspicuous alleyway sits The Terminal. It is a café that serves as a waypoint between the living and the dead. Ghosts, however, can only stay around for so long, complicating things infinitely. An apprentice necromancer named Maddy takes ownership of the café. The story will follow her experience, along with those of teen Ashley, infamous outlaw Ned Kelly, and fellow necromancer Chay.

Necrobarista moves away from the typical visual novel style of text box after text box after, you guessed it, text box. The central narrative is filled with collectable keywords that give further insight in the world and its characters. Each chapter also includes a first-person exploration scene. The game’s visuals are heavily inspired by anime, translating tradition 2D art into a 3D world.

This digital card game serves up a side of cultural appropriation

We saw this with Ghost of Tsushima: Western developers are “inspired” by Eastern culture, then try to use it as a base for narratives. It’s quite obvious why this isn’t okay. So when I saw that Sharkbomb Studios, located in Germany, decided to make a game titled Nowhere Prophet that it describes as an “Indian-infused” digital card game, I nearly saw red. And then recently, when it was announced the title would be coming to Nintendo Switch, I definitely did see red. The console will reject anything slightly resembling sexuality, but cultural appropriation? Nah, that’s fine. There’s a new video showing 15 minutes of Switch gameplay, but quite frankly I don’t want to give the developer any extra YouTube hits, so a screenshot will do just fine: 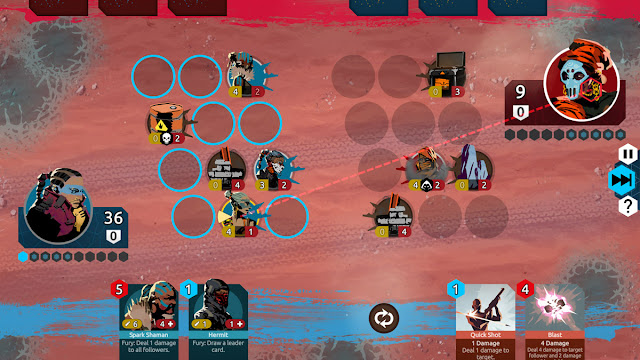 Set in a post-apocalyptic world, the game is set on the planet of Soma, many years after a technological collapse. Everyone has turned into a bandit, or lost their minds. This is where the “Indian-infusion” comes into play. On the Steam page, it states, “In this world inspired by Indian culture you lead a convoy of outcasts.” Who the hell are these Germans to make a game inspired by Indian culture? If I want a game about Indian culture, I’ll buy a game actually made in India, by Indians, but thanks anyway, random German dude. I think I’ll also skip something they’ve described as “Indian-infusion” because what the hell is that, anyway? I’d even be less mad if it said “inspired,” “infused” just sounds like the developers are using the culture as they see fit without caring about any sort of accuracy. Anyway, the player leads a band of outcasts to a mystical place promising to solve the world’s problems.

If, for whatever reason, Nowhere Profit is something you’d be interested in, there are a few things to know. One, I recommend you question your intentions as well as that of the developers. Two, it will release for Xbox One on July 29, and PlayStation 4 and Nintendo Switch on July 30. Three, it’s already available on Steam, where the game has overwhelmingly positive reviews, which is gross but again, in line with Westerners who think games like Ghost of Tsushima are accurate in any way to actual past events. Proceed with caution.