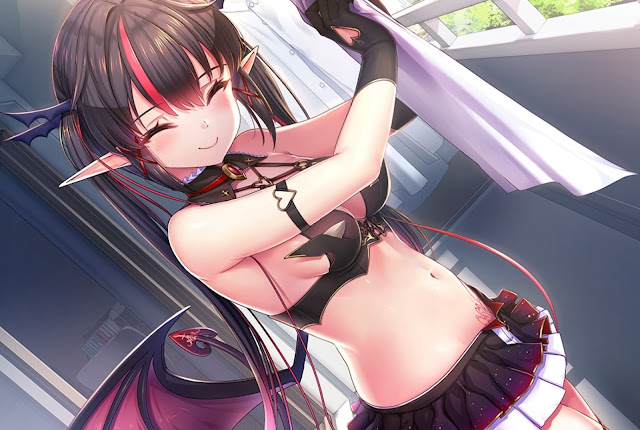 Who hasn’t wanted to catch the attention of a succubus? I mean, other than anyone that remembers what succubi actually represented across the various religions that they pop up under in one guise or another… and what they were meant to do to the hapless souls caught in their web. It wasn’t a pleasant way to go, is the point. Or perhaps it was. There’s a kink for everything these days and demons don’t even rank among the most surprising. Luckily, we have the Japanese fan service space to help us enjoy that kink, and God bless TroubleDays.

TroubleDays comes to us from developer, Qureate, who previously brought us NinNinDays, and the two games have much more in common than just the “Days” in the title. They feature much the same art style, with NinNinDays’ ninja girl Sumire and TroubleDays’ Lovelia clearly coming from the same artist – a good one, for sure, but the character models are perhaps a little too similar for their own good. They’re also much the same kind of character, being caricatures of the bubbly, airheaded, virginal girl that has come to the big city and ended up shacking up with similar drifter-through-life type. Then, through a sequence of scenes that range from the embarrassing, flirtatious, deep-and-meaningful and silly, we watch as these two characters grow closer and, eventually, romance blooms.

Both games even seem to have used the same translator, because both exhibit the same grammar and phrasing issues. The point here is that the consistency between the two is really quite impressive in a fashion, and that’s not an inherently bad thing either. As fanservicey romance stories go, it’s a good formula – the characterisation is just bright enough to be charming, and each time the character model really is attractive, with some nice animation and some superbly detailed key art to help set the scene. There’s not much to these games beyond the interaction between the protagonist and the girl, but that fits nicely too with the focus on the self-contained romance plot-line. It should be obvious right from the outset that you’re not going to be pulling any great insights or philosophical thought bubbles from TroubleDays, but it’s an entertaining enough script to punch through. 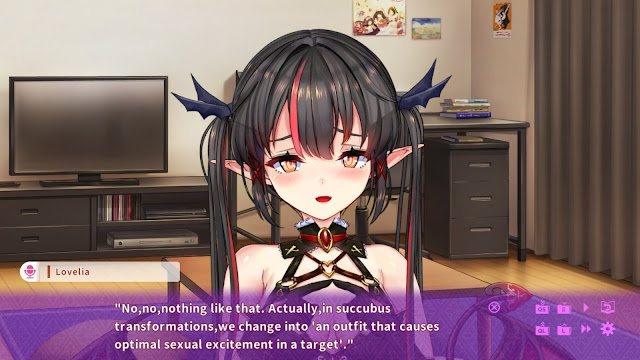 The hero of the game is that character model, and Lovelia really is very pretty. Casting her as a succubus allowed the character artist to push costuming boundaries even further than they could with NinNinDays’ human heroine, and as a result, this is not a game that’s you’ll want to play on public transportation. The key art scenes, while not that frequent, push the boundaries even further, but even during the normal dialogue sequences, the leather bikini look is certainly out there and pretty spot on for what you’d expect of a succubus. I especially love the little heart tattoo located just above the Lovelia’s pelvic reason, pointing down to the hem of her skirt. A great trick to draw the eye.

While the game is charming enough for what it aims to be, there are some reasons that think I prefer NinNinDays’ protagonist and narrative. NinNinDays’ “girl comes from a remote ninja village to learn the ways of the world in the big city” schtick is a consistent tone across the game, in that Sumire’s actions and personality are consistent with that set-up. Lovelia the succubus, however, is more inconsistent. For some examples of what I mean: she hates being called an “angel,” and as a devil we’re meant to assume she’s an inherent evil. But she’s too sweet and naïve for that. She’s well aware of sex: in the very opening scene your character wakes to find her straddling him in bed – that’s how they meet – and she’s constantly having the wildest sex fantasies, but then she suddenly becomes (violently) shy when the protagonist sees her in her underwear.

I appreciate that this is played for laughs, but it seems very scattershot – like the developers just threw every standard “humour” scene from fanservicey anime together into the one game, without any real consideration for the actual character and relationship they were building here. It would have been nice if the game could find its own sense of humour match the characterisation and the delightfully ridiculous scenes with greater consistency. 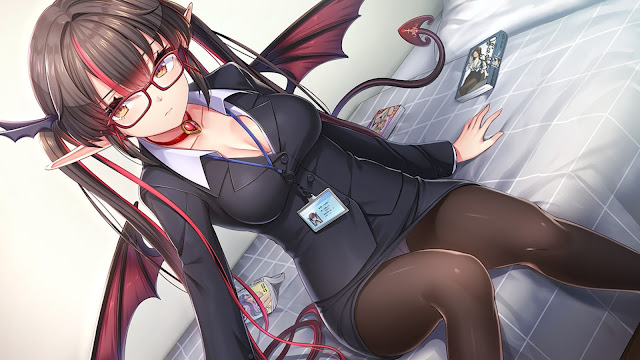 It’s also worth noting that the Nintendo Switch version of TroubleDays doesn’t feature any of the nudity available with the PC original and, in this particular instance, that’s to the detriment of the game. We are talking about a succubus story after all, and it does feel odd for such an extreme character and concept indulge innuendo and get right up against the edge of R18+ material only for the platform to hold it back in the end. There are other “adult” VNs where I haven’t minded the lack of those adult elements. Nekopara, for example, I think works better as a narrative without the sex. A succubus narrative is a different story, however. For instance, I struggle to see how Saya No Uta would work on console for much the same reason – the adult stuff really is pretty core to the theme (with that being said Saya No Uta does have a “censored” version so who knows, perhaps a port is around the corner).

TroubleDays is fine, all said. It’s a fairly brief romance visual novel with a really gorgeous character model and pinup-worthy key art. Narrative and characterisation is all over the place in the attempted service of humour, and the cheap localisation is distracting at times, but let’s face it, if you’re going to play TroubleDays it’s for one particular reason and, lack of nudity aside, you’re not going to be disappointed in what you get back out of it.

The critic purchased a copy of the game for review.