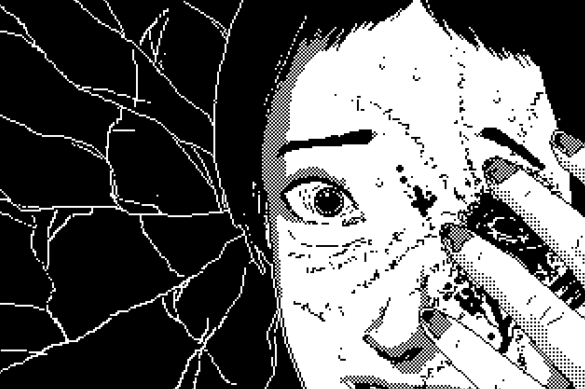 It’s technically in “Early Access”, but you may as well go invest in World of Horror now. This rather remarkable indie effort manages to be the best take on Lovecraftian Horror RPG play that we’ve seen to date, and does so in the nostalgic wrappings of old Apple Mac adventure games… which makes for one gorgeous lo-fi aesthetic.
The premise is relatively simple. You’re a resident of a small seaside village, and cosmic nightmare is on its way to consume the town and send the population mad. Whether you want to call the game “Lovecraftian” directly, and look at it as an authentic, if unlicensed take on the Call of Cthulhu RPG, or consider it a very Japanese tale by way of Junji Ito’s Uzumaki, is up to you. It’s a bit of both in practice, but either way, the game wears its influences on its sleeve, and is the perfect application of the specific flavour of fear that this little corner of the horror world has specialised in.
The trouble that many game developers have traditionally had with Lovecraft is that his horror is meant to be of the mind. You only ever get the most vague descriptions of Lovecraft’s monsters through his works, because what can be imagined is always so much worse than what can be seen. Really, the horror of those stories comes from the affect the monsters have on the delicate human mind – the inevitable madness of the protagonists, and the sinister understanding that what drove them mad just on sight must be really, really messed up. World of Horror’s humble visual presentation enables that precise response in players. The grainy, “1 or 2-bit” visuals rely on players filling a lot of gaps with their own imaginations, and this game has the most wonderfully creepy tone as a result. 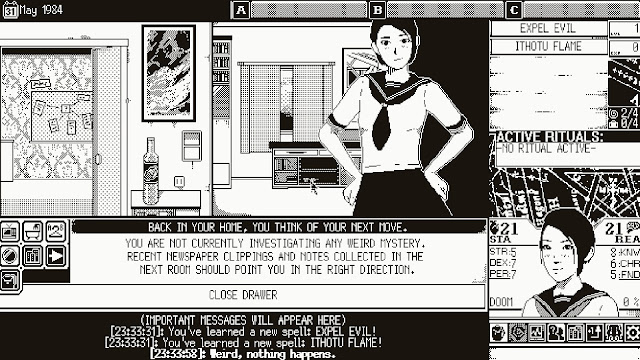 It’s also striking and immediately engaging. I pulled this out on my laptop to play on a train trip when testing, and a couple of people actually stopped to ask me what I was playing. It does take a while to get used to the aesthetic, but over time what initially comes across as an eye-catching if draining overload of pixels and sketchy drawings becomes instead evocative and moody, and I’ve not played a game that has been more fundamentally immersive through its aesthetic decisions than this one.
It plays a cracking game, too. Your job is to try to prevent the cosmic entity from bringing about armageddon. You do that by investigating a number of cases (randomised, once you work through the tutorial). Those cases involve following a trail of virtual breadcrumbs, finding clues, and defeating enemies. As you investigate you’ll also encounter random events and – as will come as no surprise to anyone that has experience with Lovecraft – those rarely work out in your benefit.
The biggest challenge you’ll face in World of Horror is the incessant drain on your limited resources. Funds to buy equipment and items are limited, and you’ve got two health statistics – health and sanity – both of which have a tendency to drop quickly and are slow to recover. When you do have the opportunity to recover stats, it’s at the expense of the ominous “doom” rating, which starts at zero per cent, and on the way to 100 per cent regularly hits you with new problems, as the rapidly-closing cosmic horror starts to exert influence over reality itself. World of Horror isn’t easy, but then it shouldn’t be. If you’ve played the Arkham Horror board game, or a good pen-and-paper Call of Cthulhu campaign with a good DM, you should know that where (most of the time) games are about empowerment, in this particular subsection it’s about dis-empowerment instead, and watching your character’s sanity slowly slipping away, even as they level up, certainly achieves that. 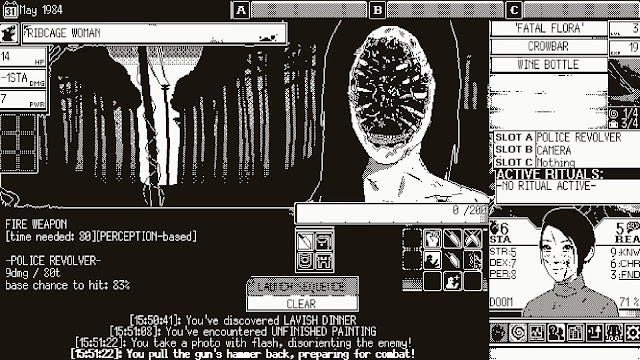 Mechanically World of Horror is simple – combat doesn’t involve much more than queuing up a couple of actions and then hitting the “go” button, and exploring the town is down via a point-and-click interface. It’s all turn based, so there’s no time pressure, but with the “doom” rating, you’ll want to take your time and be efficient about your movements. The interface does take some getting used to, and it was only after a half hour or so that I understood what part of the screen I should be looking at all the time to understand the narrative elements, but that’s really the only flaw in the entire game.
World of Horror has also been very cleverly designed to be modular – it will be so easy for the development team to add new “cases” to follow, monsters to fight, and even locations to explore, without affecting the base game or its balance. I’m assuming that the plan is to build on the game in that modular fashion, hence the “World of” moniker, and open the platform up to people to write their own stories. The potential for this to become a breeding ground for wildly creative ideas, and it’s exciting to think that right now we’re just on the beginning of this particular journey.

We’ll have a full review of World of Horror when it moves out of Early Access phase, but there’s really no reason to avoid the game in its current state – it plays beautifully, and I’ve yet to experience a crash. This is one of those Early Access titles which is largely in name, and while there might be some minor adjustments made, or bugs squashed, I would fully expect that what we are looking at here is, for all intents and purposes, the final game. And what a beautifully twisted thing it is.

Enjoy the return of Ty the Tasmanian Tiger with this trailer