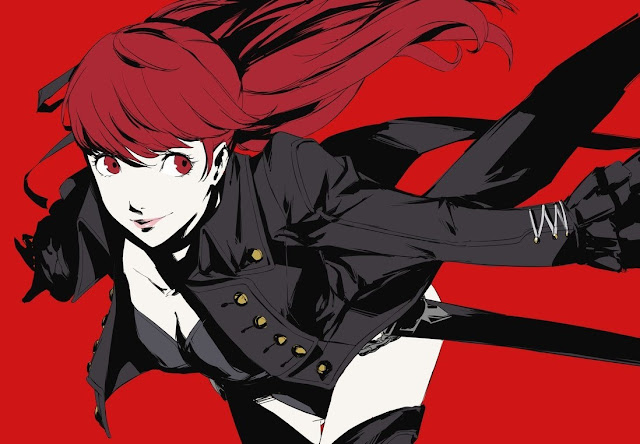 If there was one thing that Persona 5 did not need, it was more content. In the three years or so since that game released, I have highlighted it over an over again as the epitome of how, in video games, the push towards giving players ever more content could result in something losing so much of its value simply because the developers lost control of it. I don’t know if it would be even possible to finish the game in less than 100 hours while paying attention to the plot, and that is simply too much. No, more content doesn’t help Persona 5 Royal’s case.

Related reading: More Persona fun! Persona 5 Dancing is a hell of a lot of great rhythm action. Our review.

That’s not to say that the new stuff that has been added to Persona 5 is by any means poor. The main addition is a brand-new character, Kasumi Yoshizawa, and that girl is amazing. She gets her own character arc, and it is beautifully woven into the existing game. A little like the “.5” version of Catherine that was released a couple of months ago, Atlus has quite superbly worked a character into the game that wasn’t there previously, and you wouldn’t know she was new if you hadn’t been told. In addition to Kasumi, there’s a new dungeon (“palace”), new enemies, new personas to collect, new endings, and new elements added to the existing dungeons and gameplay mechanics. There were some that may have dismissed this as a lazy re-release that could have been a DLC add-on, but that’s not really the case as it turns out. This “.5” edition goes well beyond an expansion.

Unfortunately, the issues with Persona 5 are at a foundation level. Most significant is the bloat. It’s as simple as that. Everything that is in Royal is great, but it’s also all so overwrought and extended that you become dulled to it all well before the end. Dungeons offer slick design, interesting puzzles, and some of the most vibrant, dynamic combat that we’ve seen in a video game to date, but they just roll on, and on, and on. You’ll reach a save room after hours of questing, and one of the characters will casually mention that “you’re about halfway through.” It’s instantly deflating because, every single time, it will feel like you should be much closer to the end than that. The very first dungeon, which is really just an extended tutorial, took me about 15 hours to get to the end this time around, with everything new added in. You can probably do it faster by playing on a lower difficulty setting than I did (the highest), but not that much quicker. 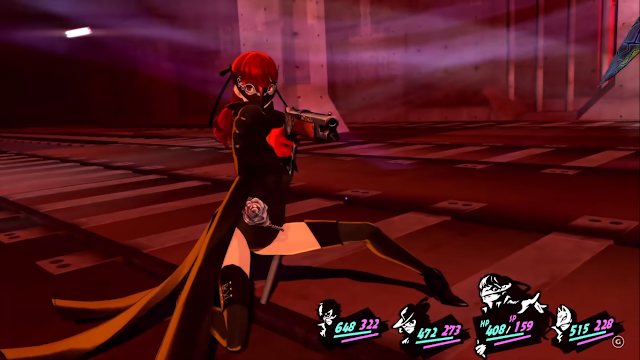 Outside of the dungeons, you’ll get to do all the stuff that you usually can in a Persona game. You’ll get to build up relationships with other major characters, eventually developing a deep bond with them, which produces both benefits in battle, and discovering some deep and (usually) interesting characterisation, as those “dates” involve your buddy or prospective romantic interest sharing their deepest fears and internal conflicts. Alternatively, you can focus on building your character’s personal attributes by completing tasks, focusing on study, or simply trying to scoff down a massive burger. This side of Persona is effectively a slice of life dating simulator (not that we get many of those translated into English, but it’s a genre that runs hot in Japan thanks to the likes of Love Plus), and it’s tonally perfect for getting you to really care about the characters and their world.

But even here the bloat hurts Persona 5, because characters fade into the background so quickly that their role within the overall narrative feels transient. Let’s say you like Ann, and decide to spend a lot of time with her early on. Before the game’s even halfway done you’ll have maxed out her social rank, and she’s your girlfriend now. With her dungeon being the first one, and there’s no point to socialise with her further, though, and consequently she is relegated to a bit role as part of the ensemble. She’ll pop up for a couple of lines here and there, but Persona 5 has time to burn, and ten hours later she no longer feels like an important character – not to your protagonist, nor the overall plot.

Other characters are introduced late into the proceedings and feel like an arbitrary addition to boost party members, but also feel like an impostor to your tight-knit group. Throw in Kasumi spreading the characterisation and interactions around even further, and Persona 5 feels like a game that the developers lost control of completely. Every element and character works well in isolation, but pulled together, it comes across as the developers finding everything so unwieldy that they ended up giving up and simply embracing it. 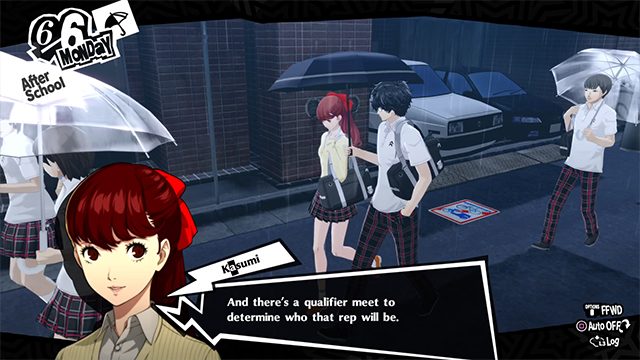 Thematically, the game is a also an unfortunate step back from its predecessor, too. Part of what made Persona 4 so powerful is how densely philosophical it all was. The idea of each dungeon being a manifestation of one of the hero’s psyches, and then the boss being a metaphoric coming of age moment, where the character finally came to terms with who they are, provided a rich groundwork for storytelling. Beyond that the game touched on Nietzschean and existentialist themes, and was generally the kind of game you could not only play, but also study. Persona 5 – and now Royal – abandons that side of things to a great extent. There’s a bit of a narrative around free will and the implications of that for humanity that is introduced late into the piece, but without going into spoilers I can’t say much more of that other than to say it’s rather clumsily handled. Dungeons are now manifestations of a villain that is close to whatever character is most recently added to the party. Those villains become standard, run-of-the-mill boss battles, rather than the representation of inner turmoil. Thematically, Persona 5 does have an interesting theme of rebellion running through it, and a disdain for the corruptibility and decadence of adults, which is quite pertinent to our real-world existence given that teenagers like Greta Thunberg are as likely to be derided by adults than have her very reasonable concerns listened to. It’s also rather heavy-handed in expressing that theme, however, and the rich nuance that powered Persona 4 seems absent.

Related reading: Even more Persona 5 fun! This time as a dungeon crawler on Nintendo 3DS. Read our review of Persona Q 2 here.

What Persona 5 does nail down completely, however, is the gameplay. This is one slick JRPG, with one of the best turn-based combat systems you’ll ever experience. The basic goal is to find – and then exploit – an enemy’s weak spot, which can be done through a range of physical and magical attacks. With every enemy in every dungeon having a different set of weaknesses, however, you’ll find yourself needing to constantly switch between allies and personas in order to continue capitalising on these weaknesses. So many JRPGs struggle to get players to use the full gamut of skills available to players. Even in boss battles you’re often able to spam your way through with simply and proven strategies. With Persona 5, experimentation and variety in strategy is mandatory.

Dungeons – while being too long as I previously mentioned – are also rich playgrounds for exploration and puzzle-solving. There are little items that you’ll want to track down in hidden places along the way, and each dungeon makes a point to test player’s exploration skills in different ways – whether it’s sneaking past hordes of enemies, avoiding traps, or zip-lining across chasms. Given that your team play as a group of “phantom thieves,” it should be no surprise that they’re a nimble bunch. The need to be stealthy is worked into the combat too, because if you can get the jump on an enemy (leap out at them from a hiding spot), you’ll do a really stylish little “surprise” animation, and have a free round of attacks in the combat. Persona 5’s combat system works on the assumption that you’ll get the jump on your opponent in most battles, since it’s incredibly easy to activate the surprise attack. That’s not to say the game is easy, but it does like to push the theme of phantom thieves by giving making those stealth assaults such a core part of the loop. 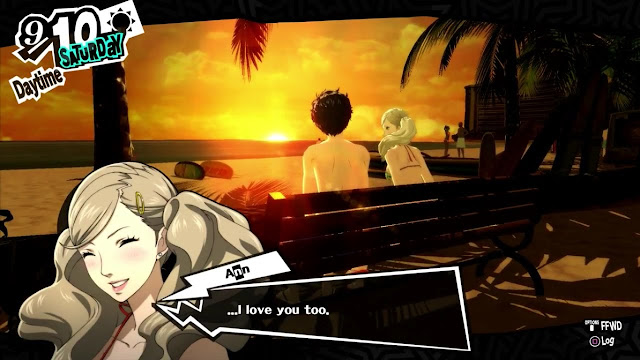 The final element of Persona 5’s systems that works unbelievably well is the Pokemon-like collection of Personas. Whenever you knock down enemies in combat, you can approach them and ask them to join your party. They’ll ask you a couple of questions and you need to answer, based on their personalities. If they like you, they’ll join your side. On top of this, you’re able to “sacrifice” two (ad later more) personas to trade up for a more powerful monster that retains skills from both base creatures. In this way your stable of personas will be in a constantly, rewarding flux, with monsters being both beautifully designed, and having such a variance in skills that experimentation is a reward all to itself. Getting the very most powerful monsters is a “breeding” challenge indeed.

Persona 5 is a really great game, so when I say that it pales in comparison to its predecessor, it is important to remember that I’m saying that it’s only mildly inferior to one of the greatest games of all time. Persona 5’s excesses and its thematic step backwards are issues, but the raw gameplay is so enjoyable, and the characters so vibrant and well-written, that I haven’t minded having the excuse to play through the bloat again. Not by any means.

Persona 5 Royal: I love this game but…