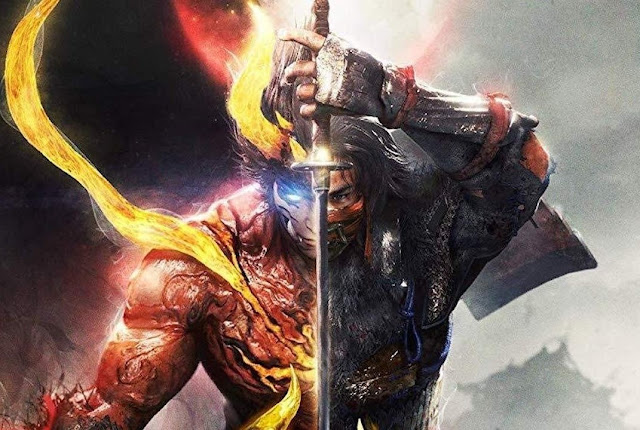 Koei Tecmo’s Nioh was a breakthrough in so many ways. It represented the first time that a developer outside of FromSoftware had figured out the X-factor that made FromSoftware’s Dark Souls and Bloodborne such incredible experiences. Koei also managed to do so while keeping a firm eye on its own quality as a developer, and brought real-world Japanese storytelling lore and history into the experience. In the same way that Samurai Warriors has become established as an abstracted, but authentic, take on sengoku history, so too was Nioh.

Related reading: My review of the original Nioh

A couple of things have happened in the years since that soured me, ever-so-slightly, on Nioh 2 at first. FromSoftware released Sekiro: Shadows Die Twice, which was disappointing as it was the mighty FromSoftware making a game about its native Japanese culture and heritage and… not doing much with it. Sekiro is many things, and almost all of them laudable. A cultural product of Japan was not one of those. And then Koei Tecmo decided that for Nioh 2, not only would the developer return to sengoku-era Japan, but they’d strip one of the best things about the original out of the experience: you would no longer be playing as name protagonist (William Adams from Nioh)… but rather you’d be making your own avatar.

The problem with allowing players to create their own characters is that those characters can no longer have a meaningful personality tailored to them. Of course on one level I did enjoy creating a woman, giving her long, green twintails, and then throwing her against the oni and yokai of Nioh 2, but I also knew from the opening seconds of the game that, because the developer had no idea what type of character I would create, my avatar would be a shallow, hollow vessel, rather than a named personality like William Adams. Thematically, it was a big step backwards, given that the original Nioh so inspired me that after playing the game I read multiple books on Adams, and even visited his grave site and monument on a trip to Japan. Character creation is not always the right step forward, and where the original Nioh was a rich storytelling experience under the Souls-like cover, Nioh 2 is much flatter in that respect. 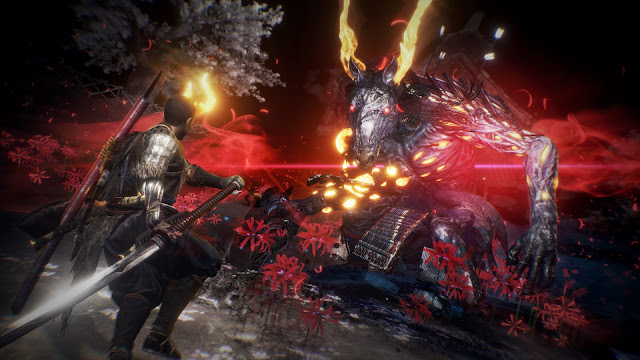 I also found the choice of the sengoku era aggravating, and it became moreso the deeper I got into the game. Why canvas the exact same period of history? Yes, Nioh 2 tells a different story, and is set a few years beforehand, making it a prequel that establishes the events that Nioh 1 depicts, but why not tap into any of the many other periods of Japanese history that were also filled with strife and stories of demons and wars? Do me a favour: go and read the stories of Minamoto no Yoshitsune and Benkei, and try telling me that their adventures were not absolutely perfect for a game like Nioh. I love sengoku history. I’ve taken entire week-long trips in Japan to visit the battle grounds and follow the paths of my favourite personalities from the era. But I did not need Nioh 2 to be another sengoku story. It actually struck me as a bit of laziness on the part of the developers – an easy return to the familiar, and at times the narrative felt thrown in almost as an afterthought.

But, of course, I’m part of the reason Koei continues to return to this setting, because I end up loving the overall experience of just about everything that is put in front of me, and missed opportunities with the storytelling aside, I really love Nioh 2. It’s more a refinement than anything particularly new, but Nioh 2 nonetheless feels like Koei’s team took the same step that FromSoftware did in going from Demon’s Souls to Dark Souls. Demon Souls, the predecessor, was a deeply creative work, but one where the developers were clearly still understanding their own creation. Dark Souls is where the vision was truly realised. Nioh 2 is that: Koei Tecmo’s vision for a trip through Shinto horror and hell, refined to the sharpest of points.

There are a couple of things that are immediately noticeable that Nioh 2 gets done so much better – the level design is that much fairer and better paced. Like with all Souls-likes, the “rest stops”-bonfires in Souls and little Shinto shrines in Nioh – are spaced between sections of level designed to test players in certain ways, before culminating in a particularly challenging battle or trap. With Nioh 2, these things are spaced out at just the right distance so that, by the time you hit the sections that are going to start regularly killing your character, you know you haven’t got too far to go beyond that to hit a rest point and open up a large new section of world to explore. That tantalising promise that you can make real, meaningful progress just one more attempt was enough to keep me playing, even through the most frustrating enemies that I just could not figure out, and in my read of this overall genre, that’s the key trait that distinguishes a good entry from one that loses my attention. 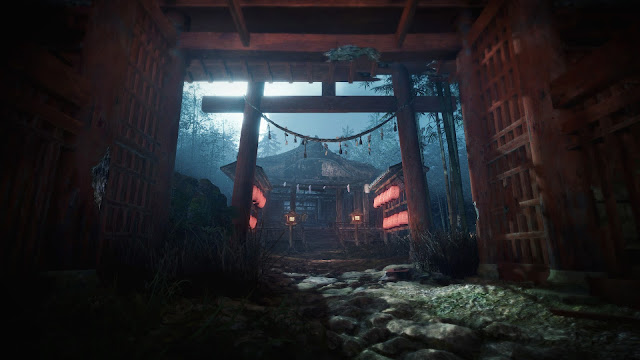 Also noticeable is that Koei has really ratcheted up the rate in which you’ll be fighting yokai, oni, and other beats of obscene power. Nioh had extended periods in which you’d be wading through standard enemies, but with the sequel, everything feels subtly more condensed down into a format designed to prevent you from ever having to go through the motions and race through “easier” sections too often. Nioh 2 is by no means a shorter game thanks to its difficulty and the need to keep replaying sections, but there’s less “dead space,” and its a more vibrant, active game for it.

Related reading: Our review of Sekiro, for people who want to see From Software’s take on a Japanese “Souls-like” experience

Aside from the new weapons, the combat mechanics from Nioh have been mostly left intact and refined slightly, and that means they’ll be impenetrable for a lot of people. Even in comparison to the FromSoftware games, Nioh is complex, with multiple different combat stances to adopt, each with their own pros, cons, and skill trees to level up. There’s the need to press a button at the end of combos, with exactly the right timing, to maintain stamina levels, and since the only indication to help with timing that button press is a small swirl of glow-dust, mastering that system in the heat of battle takes practice and patience. And then there’s the need not only to master the block-and-dodge flow of much of the combat, but to also master yokai abilities and counters (as your character is part-yokai), in order to disrupt the powerful attacks of demons and give yourself the tiny openings that Nioh 2 is willing to permit you.

There’s no getting around it – this is a complex, challenging combat system that, layered on top of the high level of difficulty that enemies and their attack patterns present, is a recipe for disaster. Or it would be in lesser hands. The development team behind Nioh – Team Ninja – has a long heritage of brilliantly well made, brutally challenging games, and while there has been a rare misstep in the team’s history (Ninja Gaiden 3), Nioh 2 represents all of that knowledge brought together. You’ll need to dedicate yourself to the game in order to truly come to grips with it, but once you are fully in control of your character and the myriad range of combat options open to them, you’ll be rewarded with some truly mesmerising melee, and the sense that you’re control of some genuinely incredible combat abilities. 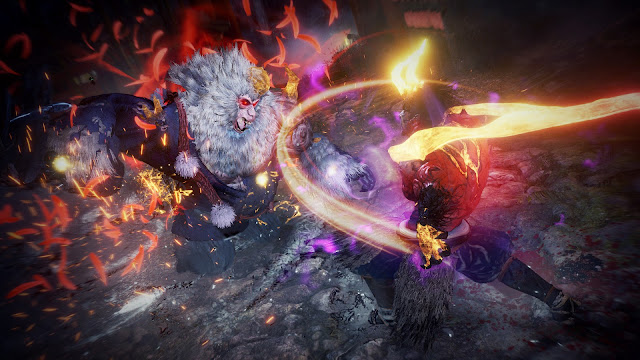 For all my grumbling about the lack of a named protagonist, safe setting and historical background of the game, what I truly love about Nioh 2 is, much like its predecessor, it had me taking notes as I played along, giving me plenty of names of yokai, oni, characters and settings to research each time I put down my controller. One of the great things about Shinto spirituality and mythology – as I noted with my review of the oddly similarly-themed Katana Kami – is the rich creativity that it affords. As one of the oldest continuous cultures with a storytelling tradition and history to match, Japanese yokai, oni, yurei, historical figures and legends make it easy for developers to create a gauntlet where every new creature faced is distinctive, interesting, and has genuine history behind it. The greatest joy in pushing through Nioh 2 is seeing what you’ll be fighting next, and while the path there involves so many repeat attempts that you’ll lose count, you’ll want to push on because you’ll also know that at no point will the development team have run out of ideas. To summarise in one word what Nioh and its sequel represent, it’s “vivid.” Whether you’re scrambling to survive in the game’s hazy, dreamlike “dark world,” or stalking your way through the dilapidated villages and war-torn landscapes of medieval Japan, these games have one thing that FromSoftware has never achieved – a link to the real world, and all the cultural heritage that comes with that.

Just as I have a special reverence for Demon’s Souls, even as I recognise Dark Souls was able to refine and improve on “the formula”, I recognise that Nioh 2 is the better game, while also missing spirit and originality, which has gone by the wayside. That said, Nioh 2 is still going to be better than just about everything else that will be released in 2020. Brilliantly creative monster and level design come together with subtle – but important – improvements to the complex-but-rewarding mechanics. This is something that only people with patience and perseverance should sign up for, however this is also a rare case where the rewards truly exceed the demands that the game makes of players.