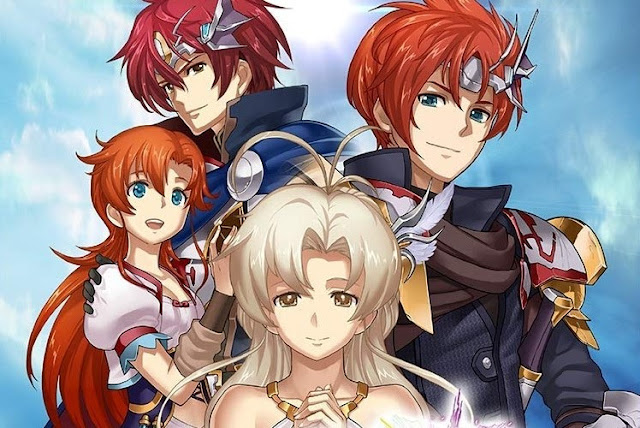 You can’t really fault the developer (Chara-Ani), or publisher, NISA, for trying. On the back of Fire Emblem becoming one of Nintendo’s most important properties, it’s not surprising on any level that someone would want to dust off Langrisser (originally Warsong in the west). It was, after all, perceived as the direct rival to Fire Emblem back in the day. In an overt attempt to gauge whether interest in the series – long into hiatus – could be restored, the developer has remade the original two titles in the series. The result is a lot of nostalgic fun, and while I don’t believe that the newer Fire Emblem fans will necessarily see the appeal, those who have been playing tactics JRPGs for years should certainly get a kick from it.

Related reading: Our interview with the director of Langrisser I & II from Tokyo Game Show 2019.

For one thing, the developers haven’t really done that much with Langrisser in producing this remake. Take Fire Emblem Echoes as a point of comparison – a 3DS remake of a NES title that Nintendo pushed out late in the console’s life. Echoes was a remake of the second Fire Emblem title, and gave it a truly deluxe treatment, with 3D character models and expansive dungeons to explore, in addition to the standard 2D sprites on the combat screens themselves. Nintendo also largely rebuilt the narrative and significantly enhanced the overall experience so that it very much felt like a new Fire Emblem.

Langrisser I & II is a much more humble effort. The art has been redrawn completely (though you can play with the original designs if you prefer). There’s also the odd new narrative arc, but the storytelling is left largely intact and that side of things, as with most games back then, is brief and blunt to the point of being shallow. It’s there that Langrisser I & II will lose the Fire Emblem audience, who are now used to rich, full, epic narrative experiences. Across both games in this collection you’ll need to make some moral choices along the way, and this will affect which of the narratives that you see play out. But it’s hard to get too invested, because the storytelling is so light and efficient, featuring simple characters and traditional situations that Fire Emblem has long left behind. 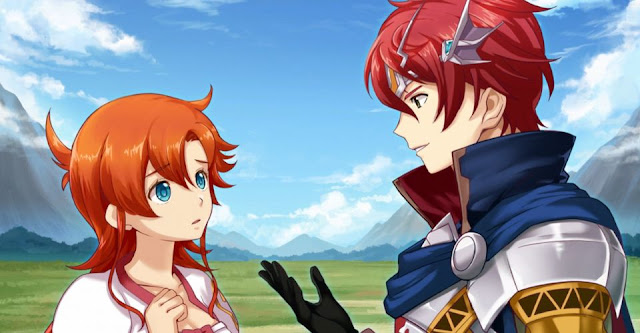 The first Langrisser deals with the story of a young prince that escapes a castle that has been suddenly attacked by an evil force (a plot strand that I remember playing through right back with Fire Emblem on the Game Boy Advance). There are some surprises along the way which are designed to make you question the morality of what the young prince is doing, but it’s all quite on-the-nose stuff, and despite being a great fan of retro JRPGs, I still found myself alternating between finding that nostalgic and just plain antiquated.

Langrissser II, though the original release was never translated into English, actually broke some narrative ground by being the first tactics JRPG to allow you to take – and change – sides in the war. The remake of Langrisser I in this package added branching paths to bring it in line with what players expect from the series now, but it was Langrisser II that established that as a characteristic of the franchise. Once again, the actual storytelling is a little too efficient for its own good and lacking subtlety as a result, but structurally, with Langrisser II, we do get a sense of a game pushing boundaries and featuring elements that come across as quite modern.

Thanks to the clean, but retro-style top-down battle maps Langrisser I & II is cohesive, and will again appeal to the nostalgic. One of the biggest features of the Langrisser series is the mercenaries system, where each leader can recruit a couple of soldiers of fortune to take into battle with him/her, and they can be used either to weaken enemies or provide a shield for the heroes on the counter-attack. The mercenaries available depend on the type of hero being led into battle, but there’s a good range of them. The downside to this system is that battles can become cluttered, with a dozen (or more) characters congregating around a single choke point, but it does help give the combat a sense of scale, and emphasises the role of the heroes as leaders. I’ve always liked the fact that you can control large forces in Langrisser courtesy of this system… and that you can use the mercenaries as disposable soldiers. With the Fire Emblem series being so committed to making you afraid to lose a single hero, you can sacrifice your mercenary soldiers for tactical gain in Langrisser, and that gives the strategy a very different (and yet tactically rich) flavour. 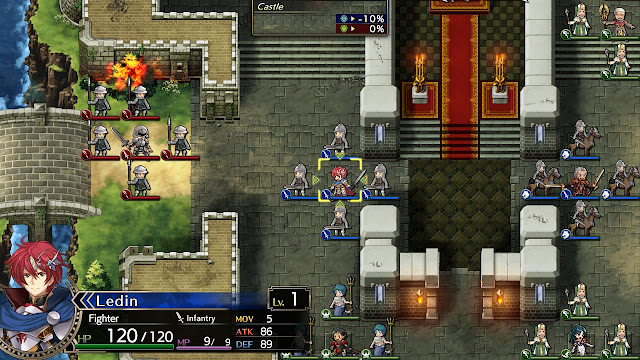 When units clash, you get treated to a little animation of the two sides going at one another. This is really only for visual appeal, but it’s a lot of fun, and provides a welcome break from the static tactical map. One area where Langrisser substantially differs from Fire Emblem is in the predictability of combat results. With Fire Emblem, there’s a chance that an attack might miss completely (doing no damage), but the game gives you that miss percentage chance, and tells you exactly how much damage you’ll do on a successful hit.

Langrisser, meanwhile, gives you a more vague prediction of the outcome, but slight variances might, at times, frustrate. For example, there have been a few times where the data on the screen suggests that I should win a battle, only for the enemy to be left with a sliver of health. It happens rarely, but a couple of times, when I had really relied on being able to defeat that enemy to push my forces forward, I would have my strategy disrupted for that turn.

Not that these remakes are overly difficult. As long as you apply the standard tactics for this genre (i.e. make sure you don’t rely on a single unit too much, and level up units as evenly as possible), it shouldn’t be too hard to cruise through both titles. On top of that, there’s even an “easy mode” which gives you access to an excess of additional resources right from the outset. With dozens of maps and plenty of narrative arcs, there’s a lot of content to work though, though you don’t have as much control over the development of your characters and forces that you do in the more modern Fire Emblem titles. What’s more, while the maps are big and sprawling, they’re also designed in such a way that they’re tactically uninteresting – it’ll be clear right from the outset how you need to approach 90 per cent of these maps. So, while the content is there, the replay value is generally not. 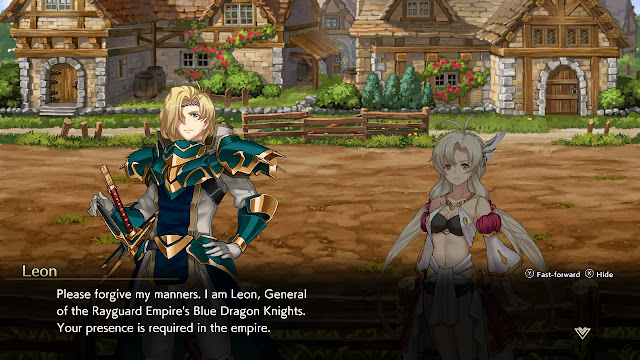 The appeal of Langrisser I & II is quite limited, and I don’t think it’s going to grab the attention of the Fire Emblem new converts that the developer was probably hoping to. With that being said, for the nostalgic, and people who like their traditional tactics JRPGs, there’s a lot to like here. The re-drawn art is lovely, and while the narrative is a little too heavy on the shallow and cliche, the focus on the battlefield tactics action is certainly a refreshing shift from Fire Emblem’s increasingly bold pivot towards being a waifu and husbando simulator.