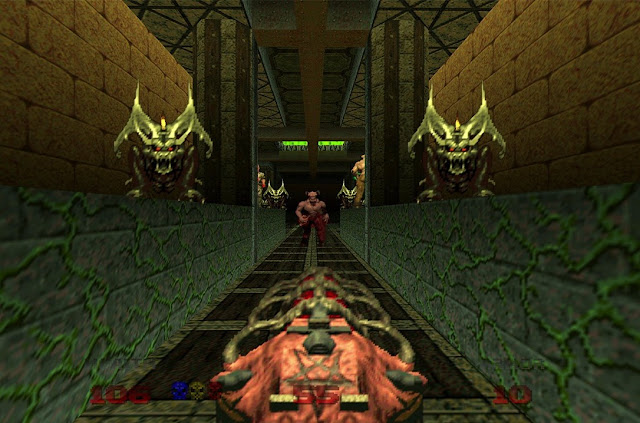 The long-forgotten and neglected Doom 64. The odd sheep in the family. The game that was basically dead on arrival on its initial release, because the Nintendo 64 was doing some fascinating things with the shooter genre even as Doom remained steadfastly traditional. It’s good that Doom 64 has been given a new lease on life, though to this day it remains a bit of a outlier within the franchise.

Related reading: Retro reflections on why I loved the original Doom so much.

Right off the bat, Doom 64’s energy feels more flat that the other titles in the series. It’s the music that does it. Each Doom title before (and since) has gone for a hyper-aggressive attitude through its heavy rock and metal soundtrack, but Doom 64’s is more subtle… you could almost (almost) call it classy. Coupled with the surprisingly clean aesthetics and environments – this Doom is rendered in proper 3D, and while it comes from the same early-era 3D as the likes of Quake, it’s a good looking game – and the greater emphasis on (primitive) puzzles, and Doom 64 becomes more akin to a game that wants you to explore and adventure within, rather than run-and-gun your way through endless gore. It lets itself down a little in that the game sticks steadfastly to telling you how long you spent in a level at the end of each level, but there is certainly a different design methodology at work in this game, and that’s appealing.

Doom 64 isn’t a 3D remake of the original Doom, nor any of its sequels. It’s its own thing, though it will be completely familiar and comfortable – at least in terms of how it plays – to anyone who has played a Doom title before. There’s no effort whatsoever at narrative, for one, and it would be another seven years before anyone thought to try an integrate a narrative into Doom (that game being Doom 3). That was perhaps a misfire on the developer’s part back when the game was first being created. The “tricks” that Doom and its sequel pulled (being transgressive in their hyperviolence and attitude) had started to wear thin by the time Doom 64 rolled around, and with other shooters of that era becoming more complex in mechanical and narrative design, Doom 64 came across as a relic that was no longer adding anything of substance to the genre. It was a well-made relic, to be sure, but you couldn’t even jump or look up and down in this game. It really needed a narrative in the absence of anything mechanically interesting to continue to maintain the series as something that pushed the genre forward. 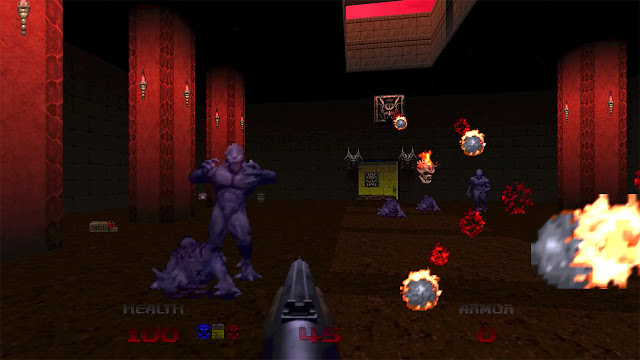 The other great oversight with Doom 64 was the lack of multiplayer, and on a console that was offering players Goldeneye 007 and Turok 2, the lack of multiplayer represented a significant misunderstanding about how people liked to play their shooters by that point. In terms of raw content there’s nothing wrong with Doom 64 – there’s around 30 levels to play through – but given what’s available on Switch now, I would imagine that people would either rather play the multiplayer available on the earlier Doom titles, or go for a single player game that does tell a story, as with Doom 3 and the new Doom experience.

For all that it is worth mentioning that Doom 64 really does play nicely. Movement across the floor is slick, and while it remains frustrating to be faced with stairs but not be able to look up or down, as anyone who has played Doom knows, the guns are perfectly capable of killing enemies of different elevations anyway. Those enemies look so much better in 3D, and the damage done to them is so much more viscerally gory than what was possible through the older 2D games. In line with that, the weapons are so much fun to play around with. From the chainsaw through to the rocket launchers and mini-guns, Doom’s violence and bloodletting is every bit as appealing in this game as any. Perhaps most significantly, it’s through Doom 64 that we got a glimpse of what Doom would become. Doom 3 went for a more moody, horror-themed experience, but Doom 64 does very much look and feel like a primitive take on the Doom reboot and new Doom Eternal. Those games aren’t really for me, but they’re obviously popular and well-received, so obviously this series has spun out in the right direction as far as the fans are concerned… with Doom 64 being that missing bridge between classic Doom and the new.

Technically the port is very well handled, with a clean framerate at all times, by the same specialists that were responsible for bringing Turok and its sequel to Nintendo Switch (at least this time they didn’t have a multiplayer mode to just drop from the game… and yes I’m still annoyed at Turok 2). The only technical issue is that the game looks incredibly dark on the Switch in handheld – unplayably so, unless you turn the brightness right up. Even then it’s not ideal. I’m not sure why that happened, but still, there is a way around it. 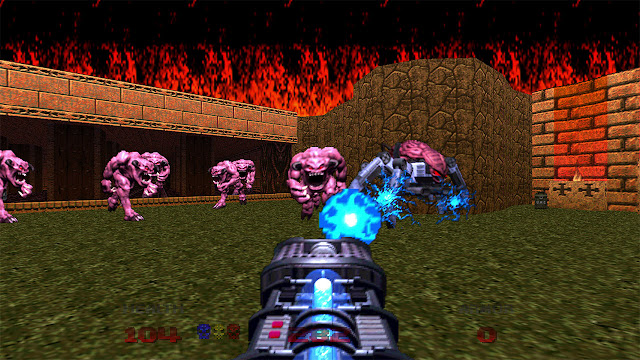 Doom 64 is an impressive port of the forgotten son of the series. Without a multiplayer mode it sits as one of the less essential shooters from the era, but as the first effort at bringing Doom into three dimensions, it’s a valuable bit of series history, and to this day it plays very nicely indeed.