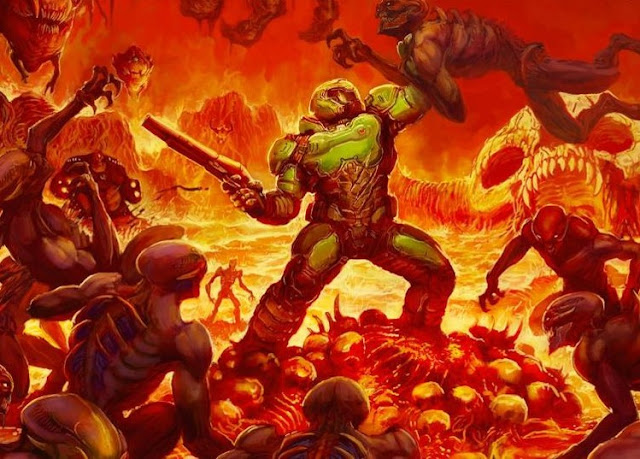 Over the weekend, Bethesda dropped the first three Doom titles on Nintendo Switch, giving us all a rush of retro nostalgia. Although there are some small issues with the ports (most notably, that they require you to set up a Bethesda account, for games that never originally needed that login nonsense), it has been a blast to dive back into one of the games that got me so into video games as a child.

Doom is, of course, a cultural icon. It, along with Wolfenstein 3D, are the two titles credited for popularising the first person shooter genre, and Doom established ID Software as a force to be reckoned with. Doom kicked off the careers of more than a few top game designers and producers, and Doom showed off the strength of shareware: give people a taste of a game and they’ll flock in droves for the full product. Before digital distribution and social media, sharing shareware around was how you got your viral marketing going, and Doom did a masterful job of that.

But for me, what really stood out with Doom was how it was an exercise in transgression. I joke around a lot about how much I’m not a fan of the new Doom (and people continue to sincerely yell at me for not liking that game, as though yelling at me will change my opinion on it), but the crux of the issue that I have with new Doom is how sanitised it is, and therefore how divergent it was from the intent of the original Doom. The new Doom is a brilliantly responsive, supremely violent, frenetic action game (with an fitting, brilliantly structured soundtrack). But it doesn’t shock. It doesn’t offend. It came across (to me, at any rate), as being a supremely safe, corporate product. Something that checks the boxes for stylish, cool action, but lacks the raw, crass, punk-like design of the original.

As was noted in Polygon at the time: When a Bethesda executive was questioned about the violence in Doom, he simply shrugged. That was a shrug because he knew it wasn’t really going to be controversial across the mainstream, because violence simply isn’t controversial in video games any long. One or two people might complain about it, but ultimately everyone working on new Doom knew that the game was not going to run the risk of being banned, ostracised, or driven underground. It wasn’t that nasty Hatred game from a few years before. New Doom was safe.

If Romero and the other makers of the original Doom would have shrugged their shoulders over a question of moral outrage, that would have been because, like the punk rock starts that Romero has often been compared to, they simply would not have cared. That lack of concern would have been in the face of a very real, very mainstream reaction to their work, however. Doom was very much the centre of moral panic when it was first released. Doom, and a couple of other pioneers in hyperviolence (Mortal Kombat, for example), led to the creation of the ESRB. Doom was chalked up among many in mainstream commentary as a motivating factor in the horrific Columbine school shooting. That criticism towards Doom wasn’t on any level fair, but nonetheless, it was a common response. Doom was seen by “decent” society as a nasty, and therefore, for all its success, Doom was also something transgressive. It broke taboos. It offended.

It’s easy to look at Doom now and wonder what the fuss was about. Visually it’s primitive, but on the other hand, in the way that it’s designed, it’s still easy to see that the game went out of its way to shock. Giant doorways replaced by upside-down crucifix designs. Demons and defiled bodies. The claustrophobia of tight corridors, monsters that would leap out from around corners, and the alien, blasted landscapes. The original Doom was never about the action. Not in the same way that modern Doom is. The original Doom was a fast-paced horror game, where every element was carefully constructed to surprise, shock, and fill the eyeball with extreme imagery.

Original Doom was so good, but I think people forget why. It was the transgressivness of it, not jus the quality action #NintendoSwitch pic.twitter.com/K4TEdN5fTI

Growing up, my parents never worried about the games I would play, but in the playground there was always the sense that Doom was something illicit. Something that wasn’t approved of. Not to the same extent as a pornography, perhaps, but certainly in that same league as horror movies (which were also, once upon a time, able to shock to the point that many of those deserve entry into the transgressive hall of fame). Doom broke through the taboos of its society at its time, and that is something that the new Doom does not do. Playing through the classic Doom over the last couple of days has reminded me of that stark difference between the two.

In fairness to the developers of new Doom, breaking taboo rarely has a commercial or critical payoff. The original Doom ended up being both lauded and commercially celebrated on balance, but being willing to genuinely offend is something that those that wear suits are rarely willing to contemplate. Doom has changed as a property and the ideology driving its development has shifted, too. The original Doom shocked and delighted through its taboo-breaking attitude. The new Doom entertains and delights by doing fast, visceral, but ultimately safe action better than any game before or after. I’m sure the next Doom coming will do the same – Bethesda was well and truly validated for the direction it took with that one. As for me… well, I’ve got the original Doom on my Switch now. I’m all set.

Video: Dead or Alive 6 finally gets swimsuits – they so sexy