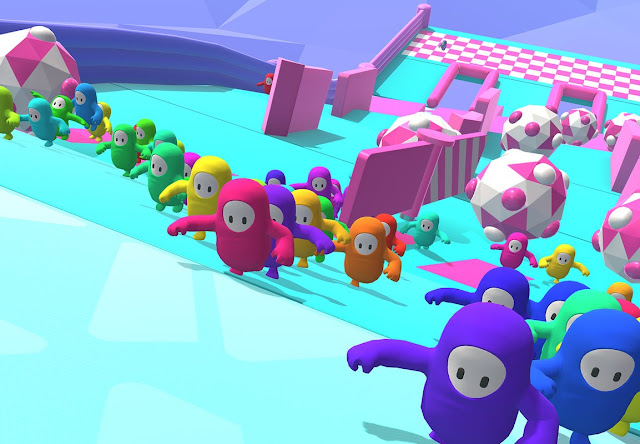 Inspired by the likes of Takeshi’s Castle and Wipeout, Fall Guys is an upcoming multiplayer mayhem game that’s all about getting through a gauntlet of things that will knock you about and send you flying as quickly as possible. The game’s getting a release in “summer” (so, winter for those of us in the southern hemisphere), and the developers have released a new developer diary, showcasing some of the mayhem and nonsense that you’ll be able to get up to when it lands on PlayStation 4 and PC.

We also had the opportunity to get a couple of questions in front of Joe Walsh, the lead designer on the game, about how the team is looking to maintain the comedy value of Fall Guys over the long term, and how the shift to online multiplayer has changed the tone of the multiplayer experience (and how we respond to it):

Matt S: Fall Guys obviously aims for humour, but I can imagine that in video games, humour can be a difficult beast. After all, replaying levels and so on is effectively repeating the joke. How are you going to ensure that people continue to find the game funny as long as they play?
Joe W: A big focus for us is making sure the punchline to that joke is different every time, and a lot of that comes from getting the physics of our character just right. Even if you get hit by the same wrecking ball 50 times the way your Fall Guy bounces and ricochets around the level should always be entertaining and unpredictable – after taking that hit your Fall Guy might career into another player and sent them sprawling, or they might somehow benefit you by bouncing towards the finish line to make it look like you intended to get whacked by that hammer all along. We talk a lot about looking for ‘once in a million moments’ when building the game, and we think it’s the pursuit of these moments that keep things interesting in the long term. You could maybe say we’re searching comedic depth in the way designers of a shooter are searching for strategic depth.


Matt S: In the dev diary you mention that you wanted the characters to look uniquely unsuited to the task being set for them. How did you balance this out with the need for a game to… well, play well?
Joe W: Finding that balance has been a real challenge for sure. One thing we found pretty quickly was that the Fall Guy still needed to feel responsive and fair- just because our characters need to look funny doesn’t mean that the traditional rules of platformers don’t apply. If your character starts falling over randomly the game instantly stops being fun. What we found has worked is giving players a similar toolset to what they’re used to in other platformers, but framing it in a way that both looks and feels really funny. For example, our dive mechanic is essentially a dodge roll that players are used to playing with in other games, but we’ve framed it in a way that makes the Fall Guy look straight out of an episode of Total Wipeout. Players still get to feel good about dodging obstacles but in a way that feels uniquely ‘Fall Guys’, and that’s been the general rule across the board. Get the gameplay feeling great first, and then layer in the humour second.

Matt S: I’m a bit of a traditionalist, in that I like my multiplayer local, and when I play online I find that I don’t tend to laugh quite so hard – that distance between yourself and the other players doesn’t lend itself well to the community sense in play. How do you think people will get along with Fall Guys when they play online and can’t knock their opponent’s controller out of their hands for a laugh?
Joe W: I think Fall Guys really has the potential to stand alone as a new type of multiplayer experience even when you’re not in the same room as others. We’ve been running anonymous ‘play at home’ playtests during development and you’re right, it’s a slightly different experience when you can’t ridicule your co-workers but that feeling of lining up on the start line with tons of other players is still just as compelling. In a lot of ways it’s even better as you’re scoping out who the best players are and identifying your rivals afresh every time – you get to build these rivalries and friendships over and over again and create these mini-stories with each Show (a match of 5-6 Rounds) you compete in.

Matt S: How do you foster a competitive edge with a game like this? I think of most popular multiplayer games – Fortnite and Smash Bros and League of Legends and whatever else – and while they’re all fun, you’ve got to say that victory is the ultimate goal. With Fall Guys, though, the act of having fun seems to be the priority. How do you think people will respond to that?
Joe W: I think if anything we’re finding the game is more competitive than we expected it to be! The battle royale-esque nature of whittling down contestants over time makes things super tense, you get these huge peaks in tension when you eek out qualification over and over again as the rounds progress. Reaching the final round really gives you that “final circle” tension when you line up against the other elite contestants to compete for the crown. We’re also working hard to make sure that players feel good even when you don’t make it that far too – in Fall Guys we want to celebrate your failures just as much as your successes, and making it through any of the rounds should make you feel like you achieved something herculean given the borderline useless way the Fall Guys run!

Matt S: What is your ultimate goal with Fall Guys… beyond the obvious desire for it to be commercially successful?
Joe W: We’ve talked to lots of people who feel like there’s just nothing out there in the current crop of multiplayer games that speaks to them, and Fall Guys is the first game that makes them want to get online and play. I think opening up online multiplayer to a totally new audience is something we’d love to see Fall Guys achieve- I can vividly remember the first time I played a game of online multiplayer and bringing that rush to players who’ve never felt represented by the current crop of offerings would be amazing. We’ve spoken to lots of parents at PAX Australia and Gamescom who told us “this is the first time I can ever see myself playing online games with my kids”, and that’s been an amazing thing to hear too. We’d love to bring a new community to the world of online play!