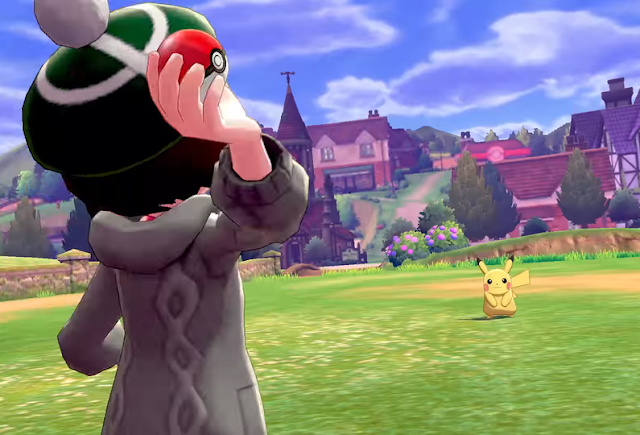 I’ve been playing Pokemon for 21 years. I figured that out because Pokemon Blue and Red was released in Australia in 1998, and I was an early adopter. Before it was even popular here my brothers and I were collecting and battling the critters like crazy. With the exception of a precious few spinoffs, I’ve not missed a single Pokemon title in the years since, meaning that only series I have a longer history with is Final Fantasy. I’m just going to say it: Pokemon Sword & Shield is my favourite entry in the series since Blue itself. I know that it is a controversial position to say that. I know I’m going to delete a bunch of whiny comments about how “corrupt” I am for having he audacity to like this game. But I did very much love every second I spent with it.

Related reading: The last “new” mainline Pokemon title was Pokemon Sun & Moon. Here’s our review of that one

Like with Pokemon Let’s Go before it, Pokemon Sword feels like an effort to get back to the root of what people love about Pokemon; the act of catching, collecting, and battling monsters. Across a number of iterations in the series, Pokemon had become bloated. Still fun, to be sure, but so wrapped up in inelegant systems and side distractions that the bloat became detrimental to the core. There was also a bloat in the number of monsters to collect, and “catching ’em all,” as the tagline went, hit a point that put it beyond all but the most dedicated players.

Here, though, there’s less of everything, and the whole is better for it. The absence of the “National Dex” that would have allowed you to effectively bring every pokemon into your game upset a lot of people, but for my part I found the streamlined number of pokemon to catch to be refreshing. Some of my favourites have been omitted, certainly (RIP Piplup), but the fresh slate approach to the Pokedex has allowed Game Freak to look at everything anew, and the game’s balance and collection aspects feel the better for it. No longer is the task of collecting every pokemon into the Pokedex an onerous one. For the first time in a number of generations I’ve actually looked forward to running around trying to fill out the entire ‘Dex again. 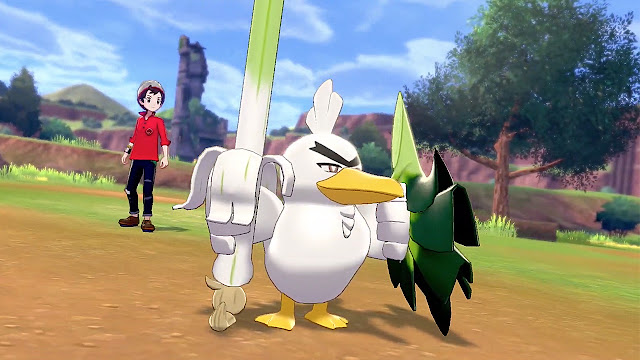 Other areas of the game took me a while to get on board with. I was hesitant with the decision to give every pokemon in the active party of six experience points after battle, even if they hadn’t participated in a battle. I always enjoyed the process of carefully levelling up my critters, by playing around with party formation and actually using each Pokemon when I wanted to improve them. There was a real sense of ownership to end up with a party of level 99 monsters… even if that was a hobby into itself as far as the time commitment was required. With Pokemon Sword I had pokemon evolving without ever having them show up on the combat screen.

But my resistance to that idea was in no small part because of my nostalgia for the series. As with Pokemon Let’s Go (which also introduced this experience splitting as a mandatory feature), in practice this decision was a smart way to streamline the experience system and keep players pushing forward. As much as I personally enjoyed the grind, other people did find that side of Pokemon to be off putting, and it’s hard to fault Game Freak for making this small quality of life compromise to the experience system in order to ensure that the maximum number of players could enjoy their time with the game. There’s still plenty of careful training that you can get involved in as you start playing with the breeding and detail of the levelling system, and while the post-game activities are relatively thin, there is, of course, the competitive scene. These things, however, are there for people that want them, without trying to force people who just want to enjoy the journey to engage with them. It’s the right balance for the series.

At the same time Game Freak has come up with some clever ways of encouraging community collaboration and a sense of shared experience. There are “raids” scattered around the world that you can participate in with teams, and the rewards for doing so are well worthwhile – rare pokemon and the like. The strategies required to beat these kaiju-like behemoths are not really any different to standard pokemon battles. They’re much harder though, as the monsters can hit hard and you’ll want to have plenty of support to whittle down their greater health. The big open spaces where these raids occur are also teeming with other players running around, and while you can’t interact with them too much, there’s that valuable MMO-like sense of a shared space that helps to breathe life into the world. A further touch that occurs no matter where you are is a “sticker” system, whereby you’ll get little visual notifications of the pokemon that your friends are catching as you play along with them. 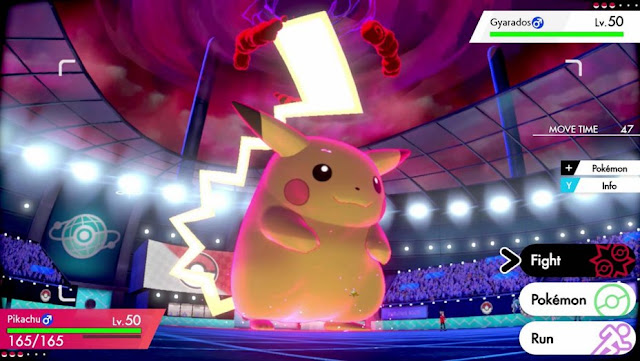 Another thing that certainly helped me want to take my time in the world and catch every monster I could was the art direction. Pokemon Sword is not triple-A in presentation, and thank God for that. The rough edges are there – there’s pop-up. There’s simple texturing. Character models aren’t anything that pushes the Nintendo Switch. In exchange for all of that there is a boundless creativity that makes every environment a true joy to visit. From the open fields to the clever environment design where your destination will appear far on the horizon (but only take a minute of walking to reach), Pokemon Sword’s design is efficient and clean, but artfully and imaginatively so. Most important of all are the small details and consistency within the world. Every area has little visual Easter eggs and details that help to flesh out the world and give it personality. Give me that over the hyper-realism and endlessly dull scale of modern open world games any time.

The design of the little critters is nothing short of perfection. With the caveat that I do prefer the earlier pokemon designs, which were generally more naturalistic and comparable to real-world animals, the wall-to-wall delight of oddball mashups makes every patch of grass or cave where monster reside a true play field of discovery. Each new area offers a good range of new common through rare monsters to spot and catch, and while this creates some issues in terms of party management (I found myself constantly swapping out the monsters I was using as adorable new ones joined my expanding collection), the rhythms and pacing of Pokemon Sword are better than ever. This game just does not have dull moments where you’re running into the same damn bat-monster over and over again for an hour at a time.

For all its streamlining elsewhere, Pokemon Sword comes across as a pure kind of nostalgia, and took me right back to my childhood. While there are those open spaces to explore and interact with other players in real time, the progression through the narrative follows a linear, and quite straightforward path that echoes the “primitive” world designs of early-era Pokemon Blue and Silver/Gold. Gym experiences are refreshingly traditional in the way they blend basic puzzle solving with a couple of preparatory battles on the way to the gym leader. As a nice touch, though, those gym leader battles have a bit of flash with both sides able to supersize their pokemon for a couple of turns, and the battles take place in a giant colosseum with a big crowd. Certainly this is a more climatic reward to mark key moments in your progression. The narrative itself is very pedestrian, but I suspect if I played this at the same age that I played Blue for the first time I would be just as enraptured at the sense of adventure and journey to it, as simplistic as it is. 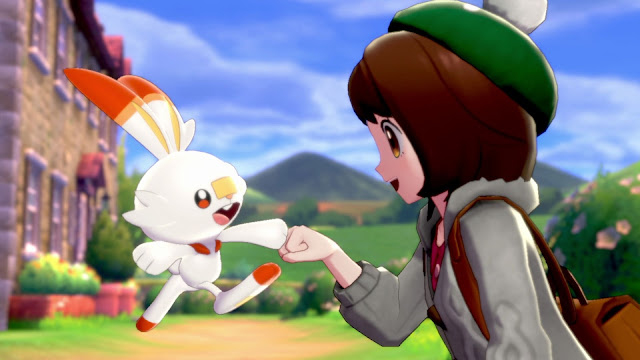 The one and only thing I didn’t care for in Pokemon Sword is the camp and curry system. Much was made of this – a chance to take a breather at any time, play with your buddies, and cook up some curry with berries found along the way. Doing so will boost your party’s health, giving you the extra energy you need to either escape to safety or push on. It also makes the pokemon love you more, and may give them an experience point boost. But it’s this kind of time wasting side-nonsense that started to dampen my enthusiasm for Pokemon in more recent titles. I get what Game Freak were trying to do, in encouraging you to spend time with and bond with your pokemon, but I don’t need to throw my Farfetch’d a ball to know Farfetch’d is my favourite. It’s the character designs and behaviour in combat that does that.

Still, it’s easy to push that camp stuff into the background and just get on with the game. Pokemon Sword & Shield is as close to a true reset for Pokemon as we’ve had. It’s clear Game Freak wanted to get back to basics, and streamline the experience across the three main characteristics that makes Pokemon great – the collecting, the combat, and the catching. In all three areas Pokemon Sword offers vibrancy – solid pacing, superb balancing, and a joyful playfulness that makes the experience so appealing. The series needed that soft reset, and now Game Freak has the same outstanding basis and core to build on anew. Just as it did back when Pokemon Blue & Red so effectively captured my imagination 21 years ago.