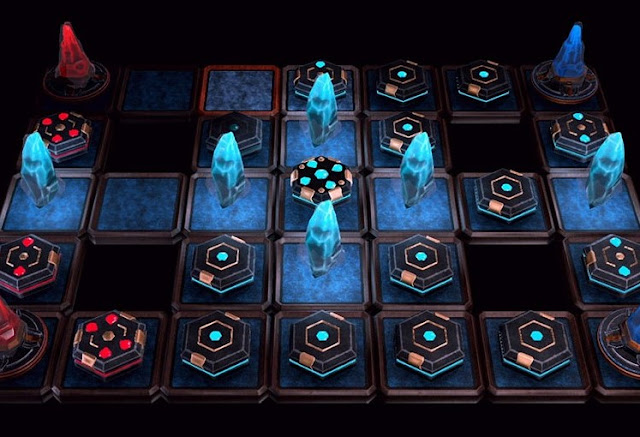 Where video games are complex structures of data, rule sets and mechanics, a good board game should strive to be the opposite; simple elegance. You look at the greatest board games of all time – the likes of Chess and Go, and the thing that stands out is that they are so simple in application, but take a lifetime to master. Tactical Mind is by no means up to the standards of Chess and Go, but it is a classy little board game that nails the “simplicity” just right. Tactical Mind 2 is really just more of the same, and that is disappointing, but it’s still good fun.

Related reading: My review of the original Tactical Mind, also on Nintendo Switch

Tactical Mind 2, much like its predecessor, rests on two systems. One is a single piece (a pawn), that can be summoned into existence at level 1, but levelled up to level 5. The other is resource management; you need to collect energy from pawns that are located next to the crystals that are spaced around the board, and that energy is used to summon more pawns, attack enemy pawns, and level up your pawns. There’s a catch, though; each time you use energy for an action, the energy cost to use that action the next time is increased by 1. So the first pawn you summon costs 1 energy point, the next you summon costs 2, then 3, and so on and so forth. The biggest tactical feature in the entire game is that this price pool is shared across both players, so if you go on a pawn summoning spree, on your opponent’s turn, they’re going to have to deal with some very expensive costs for summoning their own pawns.

Within that structure there’s a fair bit of nuance. If you use a pawn that’s next to a crystal (either to attack or level up an adjacent pawn), then the pawn is “exhausted” and will no longer collect energy from the crystal until your next turn. Pawns can only move themselves once they’ve hit level 5, and the higher the level of a pawn that is stationed next to a crystal, the more energy it creates for your side on your turn. For all that nuance, however, that’s the extent of what you can do in Tactical Mind. There aren’t dozens of different units to summon. There are no buildings to build. There’s none of that. Just a cool neon-like glow and some intensely strategic, balanced action. 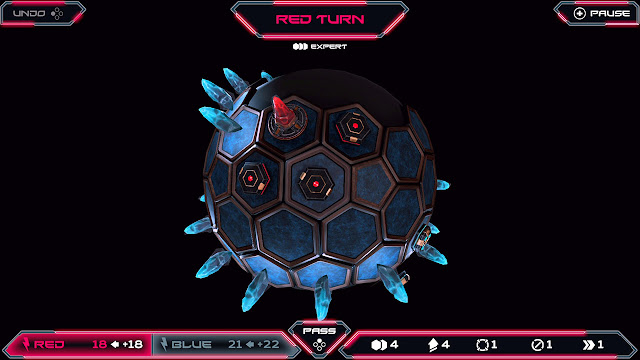 It’s the new 3D levels where things get really interesting, and are the biggest addition to Tactical Mind 2 over its predecessor. It’s possible to play on spherical and cylindrical arenas, in which you’ll only ever be able to see part of the play field, and need to constantly scroll around to see the full lay of the land. Maps are small, so this isn’t too onerous, but the need to keep an eye on the space forces you to think of those levels in a different way to the stages in which you can view the entire play field on a flat plane. I found these much more difficult, so it was just as well that they were located towards the end of the 30-odd levels that are built into Tactical Mind 2’s “campaign.” Unfortunately the campaign is restrictive – you’ve got to finish one level before being able to move on to the next one, so if any stage proves to be particularly challenging, you’re in for some frustration.

As a single player experience Tactical Mind 2 operates more like a series of mind puzzles. If you’re old enough (like me) to remember the Chess puzzles that would appear in newspapers, depicting a late-game scene where you’re generally in a disadvantage and need to “solve” the Chess game (i.e. get a checkmate) within a certain number of moves, then you’ll be instantly familiar with Tactical Mind. In most cases, you’ll start out a level at a disadvantage, with your AI opponent having greater resources and starting units. Your goal is to overcome that disadvantage. To help you with that, the AI does follow very predictable, rote paths (just as the instructions in those old Chess puzzles would give you basic behaviours for your “opponent”). It gets very, very difficult because on the highest difficulty setting there is only one strategic approach that will work, and a single lapse in judgment will bring the house of cards down, and that makes for some very taut puzzle action.

In multiplayer, meanwhile (local only), Tactical Mind behaves more like a typical board game, where both sides are evenly balanced from the start and victory is all about understanding how to effectively work within the boundaries better than your opponent. Multiplayer is as limited as a physical Chess board, in that there is no statistics tracking, tournaments and the like, and the lack of an online mode really bites for a game that would have really benefited from encouraging global competition. Unfortunately when playing multiplayer solo the weaknesses in AI become too clear – it just doesn’t “think” like a human would and falls for rather rudimentary tactics. 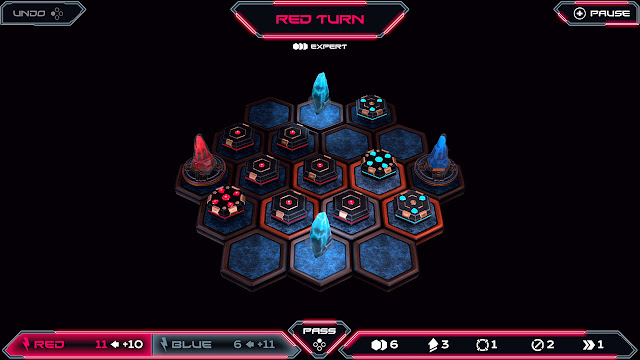 I didn’t think that there would be a Tactical Mind 2. I’m glad there is, because the fundamentals are there that it deserves to be played. On the other hand, there is so much unrealised potential in Tactical Mind. Adding new levels and 3D spheres to play on is a nice touch, but this is a game that is screaming for competitive online multiplayer. It would be a niche audience, for sure, but there are those that would take the elegant simplicity and tactical depth very seriously.

That the developers apparently haven’t considered this suggests that they’re been far too modest with their own game. Which is fine, but the audience for “more of the same Tactical Mind, just with a few new levels” may just be small enough that the modesty has killed the future of Tactical Mind, because I can’t imagine too many people who played the original will find this essential… and those that overlooked the original aren’t going to be converted on the minor changes made this time around.