We’ve talked about the Hatsune Miku-led smartphone title before, calling it by its code name of Project Sekai. Sega has officially announced the game’s title as being Project Sekai: Colorful Stage! feat. Hatsune Miku. Here’s a look at the game:

Set in Shibuya/Sekai, a girl looks up at an LCD screen at the famous busy intersection and sees it features Hatsune Miku. “She’s amazing, that Miku… she can do anything,” she mutters to herself. Upon arriving home, she looks at her phone and notices a song simply named “Untitled.” She plays it, only to be surrounded by bright white light and instantly transported to an unknown place, Sekai, where a person’s true feelings are projected. Hatsune Miku is standing in front of her, reaching out and smiling. “Let’s sing together!” And so begins the story of boys and girls who discover their true feelings.

In Sekai, each person is represented by a Virtual Singer. Their appearance change based on the person’s emotions. You can dress up in costumes to perform. There is a whopping five difficulty modes: easy, normal, hard, expert, and master.

The previously-announced console version of Two Point Hospital has been delayed from late 2019 to the first half of 2020. This includes all console launches, so it effects the Nintendo Switch, PlayStation 4, and Xbox One. 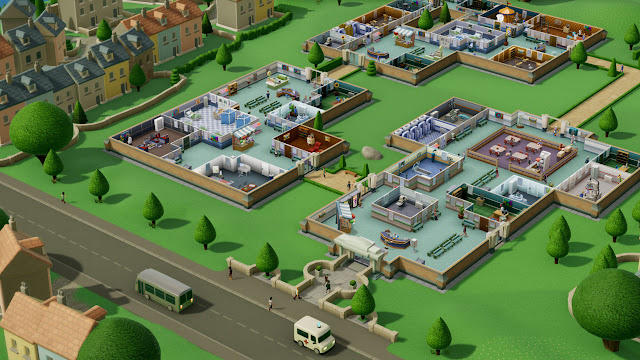 The delay was announced via a press release, in which Two Point Studios Game Director Mark Webley states, “Our community have asked for Two Point Hospital on consoles for a while now and we want to make sure we deliver a game that can be enjoyed to the fullest on all platforms. This means we will need a little bit more time to optimise the game to ensure the best possible experience across all platforms.”

Brand Director Craig Laycock gave us some more insight to the delay via a blog post, stating, “So why the delay? Put simply: making a management simulation game on three consoles (and making it the best it possibly can be on all three), is a tricky programming puzzle. We have to take the game apart and figure out how to fit it into what is essentially a smaller box. That takes a fair amount of time and engineering work, and it turns out we need to take a little more to iron out the remaining creases.”

Suda 51 and Swery 65 are working on a horror game

That’s right, the two masters of numeric nicknames have announced they are working together on a horror title, tentatively titled Hotel Barcelona. It was announced during an IGN Live Stream (a beefy one at that):

Goichi “Suda 51” Suda and Hidetaka “Swery 65” Suehiro were planning a food-themed PSVR game, but that was cancelled. Last year, they decided to make another game together. During the live stream, they were able to discuss their ideas on the spot. They want the game to be easy to play, and to be downloadable on mobile platforms.

Hotel Barcelona will feature different rooms, each representing a different person, dimension, or time. That’s about the only thing set in stone, though, as everything including format (Swery wants a side-scroller) and publisher (rumoured to be Devolver Digital who denied it via a tweet but invited the developers to talk). There might be an evil character to control. Over the next week, Suda will be designing a logo while Swery comes up with a firm concept.

Developer Powerhoof (Crawl, Peridium) has announced The Drifter, a pulp thriller point-and-click adventure game, for PC/Mac and the Nintendo Switch. Other platforms are “to be confirmed,” and a release date is a long way off. But let’s take a look anyway:

Mick Carter is a drifter, never staying in one place for long, moving from job to job. Upon being forced to return to his hometown, he witnesses a violent murder before being pursued and killed. His consciousness rips from his body, returning to his body seconds before the death. He finds himself framed for the murder he witness, and is certain that something followed him back from the other side.

The Drifter is a 2D point-and-click adventure game, a very classic style that I do love very much. There’s an emphasis on story, and puzzle-solving is key to progressing; the puzzles are designed to be unobtrusive and feel investigative. The pace should be quite quick, so don’t expect to be wandering for hours lost and confused.