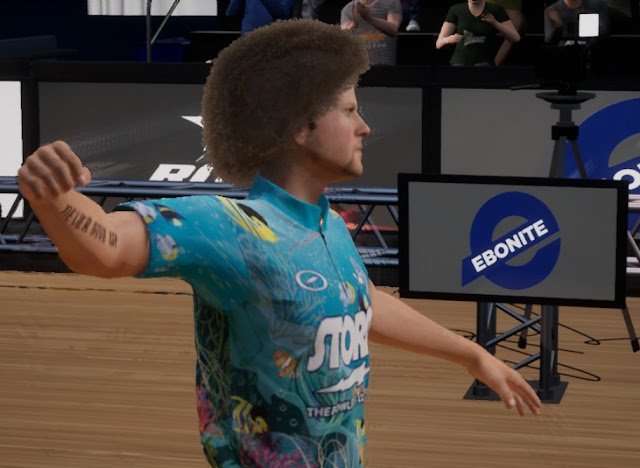 Why? That is the big question I took away from my time playing PBA Pro Bowling. Why bother getting an official license for a ten-pin bowling game? I love bowling as much as the next person, and regularly go out to bowl, drink, or (preferably) do both together. I’ve even watched professional bowling on television from time to time, which surely qualifies me as a top percentile bowling fan, but not once have I ever thought “man, I wish I could bowl against that dude that looks like Richard Simmons figured out how to reverse the aging process (and got a tattoo).”

I think that the developers secretly know this too, because before any match in PBA Pro Bowling, the commentators sound downright desperate to convince us that we should care about who our opponent is. “What a career he has had!” enthuses one commentator, who otherwise can barely muster the energy to tell me the odds of getting a spare based on the pins that are still in play. For commentary that is so brief and sparse, the sheer number of lines that has gone into introing the in-game pros does come off as begging players to get on board with the legitimacy of the project.

Similarly, I’m not sure it was the right move to give the game crowds. I know that people do show up to professional bowling events, and the crowds, while small, get right into it. The problem is that rendering and animating crowds in sports games is difficult, and in pro bowling those crowds are just meters from the action. You can get away with fuzzy blobs that vaguely resemble people when the crowd is off far in the distance, as is the case with field-based sports games. Sadly, PBA Pro Bowling’s fuzzy blob crowd are constantly visible and cheapen what is otherwise a good looking game, with players that are nicely rendered and mo-capped (even if I have no idea who they are). Most importantly, the pin and ball renders are as gorgeous as you’d expect from a developer that was previously best known for pinball simulations, but the photo-realism of those also clashes against the fuzzy blobs that are just a few steps away.

I am playing an officially licenced 10-pin bowling game why? #NintendoSwitch pic.twitter.com/cgjAZsLFEZ

This odd and patchy approach to presentation really distracts from what is otherwise a very fine rendition of ten-pin bowling. With this particular sport, the physics are absolutely critical. If the ball doesn’t move in a completely believable way, and if the pins don’t look spot-on when they are hit and scattered, any sense that a ten-pin bowling game is worth playing is immediately thrown out of the window. PBA Pro Bowling does get all of that right. The ball has the right weight as it speeds down the alley, and whenever I ended up with an ugly split, I knew that it was because my aim was slightly off, not because of shoddy programming.

The developers have also thrown in some arcade tricks and power-ups, which are optional, but only further reinforce the inconsistent tone of the game. Why go to all the trouble to get the licensing and realistically render dull, but authentic, bowling alleys, if you were going to then turn around and make the game less realistic than Wii Bowling? It’s not like these players are the girls from Dead or Alive. They don’t sell a game in themselves (case-in-point; I would spend an awful lot of money to watch Marie Rose caressing balls… because she’s playing ten-pin bowling, you perverts).

After briefly playing around with the arcade stuff I turned that it off, because PBA Pro Bowling really does work better as a reasonably dull and sterile, but accurate take on bowling. There’s a lengthy career mode in this one, which is hardly the storytelling blockbuster that EA and 2K are throwing into their sports games these days, but it does provide a nice sense of progression nonetheless. PBA Pro Bowling also has a maddening ability to make bowling seem almost simple, as you find a good line and knock down two or three strikes in a row. But then your rhythm will go slightly out and suddenly you’re struggling for spares. This is exactly, to a T, how real bowling plays out too. No matter what groove you get into, and how perfectly you’re curling the ball in to hit the exact right spot, at some point you know you’re going to screw up. Everyone else knows, too. That’s why competitive bowling is such a tense sport. 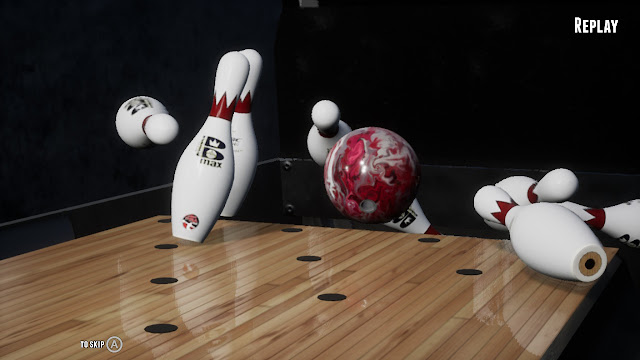 There’s also a bevvy of online modes, but I would be surprised if there’s any long-term interest in this one. Bowling’s a casual, social experience for most people, and while Wii Bowling was a phenomenon, asking people to take the sport seriously enough to go online with it is stretching things. Thankfully there is local multiplayer too, and authentic as it might be, the controls and actions are simple enough that people can pick it up and have fun with it almost immediately.

Perhaps I’m wrong with about all of this. Perhaps the developer made the right move in paying for the official PBA ten-pin bowling license. Perhaps all that energy that went into license development so that half the game’s feature list on the Nintendo listing can trumpet the real-world authenticity will translate into big sales for Farsight Studios. If that is the case I reckon I’m going to go out and acquire the world croquet championships because there is clearly a big untapped market opportunity in this licensed hyper-niche sports game market.

My Time With Dee Dee, Volume 1 is now live!