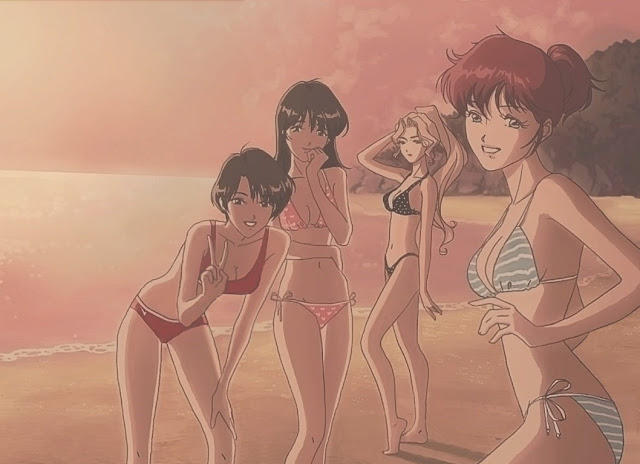 Pantsu Hunter wants you to believe that it’s offering a nostalgic trip back to your youth. As its very description reads: “Share a heart-to-heart talk, watch a movie together, take a bath, remove a computer virus, help a girl in a tough spot and – if you’re lucky – find the love of your life using the color and pattern of her panties. Pantsu Hunter: Back to the 90s is an adventure game with point-n-click elements (with a risk of swift loss) that tells the story about a guy looking for love renovated in a nostalgic 80s and 90s anime style.” To the great credit of the developers, the team nailed the brief with regards to the visuals. Pantsu Hunter is a wistfully beautiful thing to look at. Sadly, it’s just not very good on any other level.

The point of Pantsu Hunter is that you’re a “Jack-of-all-trades” that offers to help four different girls out with their problems. That sounds altruistic enough, but he’s really only doing it because it gives him access to the girl’s homes, so that the moment that they turn their backs, he can scour their place for their underwear. Once he’s found some panties, he steals them, because he’s convinced that in doing so he’ll “learn something about them” and eventually win their hearts. His goal is nothing short of a harem. It is an incredibly creepy thing that this fellow is doing on principle alone, and there’s nothing subtle about it. As per one line, in introducing one of the girls your protagonist is “helping”: “Wow this girl is gorgeous! She must have nice panties!” You can just imagine Pantsu Hunter’s writers chortling at you, with what passes for humour within the text.

But what’s really the downer here is that the game’s writers have made the whole process of stealing underwear completely pointless to the overall narrative. Remember, he’s there stealing the underthings because raiding a girl’s underwear drawer apparently tells him something about her. In practice, though, all you get from acquiring a panty is a single sentence personality trait descriptor… and because each girl has quite a few kinds of panties, many of those descriptions are at odds with one another. One pair of panties tells you that she’s a shy, cute girl. Another shows that she’s brazenly confident. Furthermore, in all of that Pantsu Hunter loses sight of its attempt to be nostalgic. The closest any of this gets to reflecting on the 90’s is by accidentally being a homage to one of the greatest films of the decade. Just as the illicit hunt through the sister’s underwear drawer in 10 Things I Hate About You results in a hilariously superficial analysis of that sister (clip below), so too does the expanding underwear collection in Pantsu Hunter tell you absolutely nothing… other than that the protagonist is a true A-tier creep.


While you don’t learn anything meaningful about the girls in Pantsu Hunter from the panty hunting, as the overall collection of underwear and “endings” (more on that shortly) grows, you do unlock cut scenes that tell you more about each girl. The translation is sometimes labored, but these visual novel-like stories are genuinely strong, and each of Pantsu Hunter’s girls are people I would have loved to learn more about. They have real backgrounds – not always happy ones, either – and there’s a much better sense of character and purpose to the whole game in that “bonus background” section than the game proper.

For a game that is all about behaving like a creep, Pantsu Hunter is far, far too tame in application. Yes, you steal the panties, but you never really see the girls stripped down and wearing them. If you make a girl happy, she’ll wink at you and you’ll get some underwear as a “reward”, but aside from when you choose the “I’m going to be an idiot and say the worst thing possible” dialogue option, the innuendo in the dialogue is quite tame. Some hot spring fun time at the end doesn’t really compensate for the bulk of the narrative, where Pantsu Hunter demonstrates over and over again that it’s just not very sexy. It’s also not charming because the protagonist is so completely unlikable. It’s not really funny, nor is it dramatic, and it doesn’t really share anything of value with the audience. There’s no intellectual nor philosophical purpose to any of what goes on in the game. It’s all just… there, and it’s really quite shallow.

The gameplay doesn’t fare much better. Another area where it’s possibly an inadvertent homage to the 90’s, Pantsu Hunter plays like a point-and-click adventure game from back then. That’s not a good thing. Pantsu Hunter is filled with trial and error gameplay, because you need to arbitrarily collect and combine items in a way that makes little sense. To fix a VCR, for example, you need to conduct a four or five-step process, including turning the television to the right channel so the girl decides to leave the room to do something else. There’s no hint that the way to get the girl to leave the room is to flick through TV channels, and so you’ll only figure it out for yourself by mindlessly clicking around until things start happening. Another ridiculous example is a challenge in which you need to memorise an order to read books on a shelf. Do it right, and a pair of panties pops into existence for you to claim. Do it in the wrong order, and nothing happens. 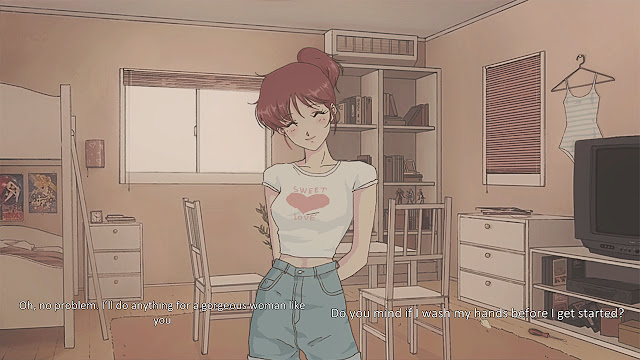 Because death and/or “game over” screens are so frequent (each character arc has over a dozen possible endings, and most of them “bad”), Pantsu Hunter’s trial-and-error structure means restarting over and over again, and simply memorising a very specific pathway of actions and dialogue choices in order to get to the eventual “true ending”. It’s arbitrary and poorly balanced, not really giving players an opportunity to deduce for themselves that an action is dangerous. For example, you choose to sit your character on the chair in the shower room, and somehow he dies and it’s game over. That goodness that doesn’t happen in real life, because every Japanese shower room has one of those seats in it.

An even worse example is another chair. If you sit in it at the start of a scenario nothing happens. After you complete one particular action, if you sit in the chair again, it instantly breaks and your character again dies. This lack of logical consistency ruins point-and-click adventure mechanics. I’m all for challenging and unforgiving games, but what I have no tolerance for whatsoever is when they become unfair. When the only way to navigate through a narrative filled with instant “game overs” is by sheer blind luck, the game’s design is unfair.

Compounding the sheer frustration that comes from trying to make progress through Pantsu Hunter is the way new character story arcs are unlocked. At first you’ll have access to just one character. You’re told that unlocking the next character requires you to “complete chapter 1, and collect three panties”. That’s fine, you’ll think to yourself, and you’ll go about collecting those three panties (not difficult, with a bit of trial-and-error), and trying to complete the chapter. The objective for that first chapter is to fix the girl’s VCR, as mentioned above. If you do that, and she rewards you with a pair of panties and then you’re kicked back to the main menu which very much appears like you just experienced the “ending” of the chapter. It’s not. The “true ending” is the ending of the chapter. And getting that one involves yet more trial-and-error, because at no point does the game even hint at what might unlock that true ending. 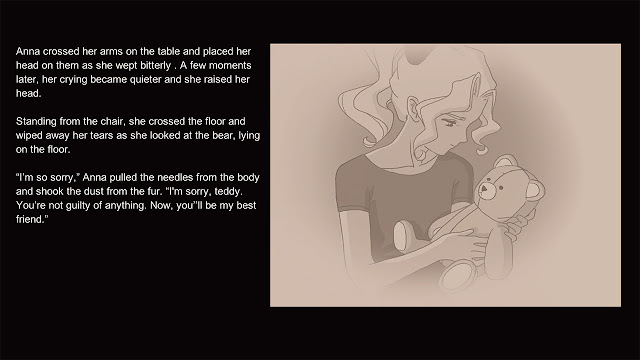 Pantsu Hunter is a complete mess, to the point that I’m not sure there was any actual vision behind it. It’s not really fanservicey, despite the title and premise. It doesn’t really push boundaries enough to be truly transgressive, let alone make some kind of point with its concept. It’s at its best when it’s behaving like a visual novel, but that part’s buried away in a bonus menu while the bulk of the game is a very poor throwback to an era in which adventure games had frustrating mechanics, which people only tolerated because the storytelling is so rich. Pantsu Hunter doesn’t offer rich storytelling to make those trial-and-error gimmicks worthwhile.

What Pantsu Hunter gets right is the visual desigvn, which is truly gorgeous and spot-on for creating that hazy, warm nostalgia for youth. The music is also beautifully whimsical and elegant. The developers had a clear artistic vision in mind when going into this project, but it almost feels like they tried to figure out how to turn it into a game at the last moment, and it’s a confused mess as a result. In theory I’d very much like to see a sequel to this, because the plus side to such an unfocused, uncontrolled experiment is that there are plenty of directions it can go. Pantsu Hunter 2 could be a transgressive delve into the sadistic. It could be a surprisingly tender rush of nostalgia. It could be a fanservicey satire. If the developers bring a lot more focus to Pantsu Hunter, and more carefully consider how to make the various gameplay and narrative elements fit together, this could yet become something special.

The Trials of Mana remake is looking gorgeous!