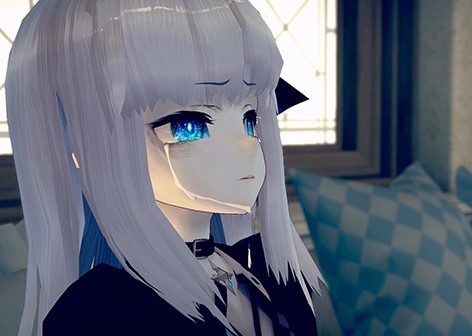 It’s important that we draw a distinction between “melancholia” and “sadness”, “misery”, and other such synonyms. The dictionary definition has the terms at roughly parallel, but in literature and other art forms, they’re really very different things.

My favourite quote in defining melancholia comes from an author that, to my great regret, I have never actually read. Italian writer, Italo Calvino, described it as “sadness that has taken on lightness.” Poetic stuff, that. Victor Hugo (who I hope we are all familiar with) had a more blunt way of describing it, as “the happiness of being sad.” Why start this review with a discussion on melancholia, you may ask? Because that’s exactly what Crystar is, and Crystar is beautiful.

Hatada Rei wakes up to discover that she has become a butterfly in some kind of afterlife. There’s been a disaster in the real world and Rei, as well as her sister, Mirai, have ended up in a rather tranquil, but desolate place. That doesn’t last long, though, as they soon find themselves back in human form. Then a demon shows up and Rei, in trying to defend herself from it, accidentally kills her sister. This, understandably, leaves her desolate, until two more demons show up (together, their names imply Mephistopheles, as in “from the classic Goethe play, Faust”) to form a contract (see?) with Rei. If she does their bidding and destroys the revenants and other monsters of purgatory (not hell), Mirai can be resurrected.


And so Rei starts off on her quest, meeting some other hunters along the way, while slowly piecing together what’s really going on and what she’s really doing to the world and those around her. Given the clear literary inspirations that Crystar draws inspiration from, you can probably guess that there’s plenty of tragedy involved.

Rei’s power – the power the demons are interested in her for – come from her tears crystalising into magical power. Yes, Rei has to cry in order to power up, and if that sounds like the most sorrowful gameplay mechanic you’ve ever come across, that’s because it is. How Rei gets the waterworks going is conveyed through impressive writing and storytelling, too. Each of the monsters that she puts down are in fact the souls of the once living, and in killing them she’s wiping them from existence with no hope of the resurrection that Mirai is promised. Unfortunately for Rei, as she kills them she also learns of their stories. Some are true monsters – one of the first you come across is a serial killing rapist that specialises in little girls – and learning their story doesn’t exactly inspire sympathy. Others, however, are tragic little stories (and should come with content warnings that the game doesn’t actually mention ahead of time), that are more than enough to get the emotions flowing. The main stories – the ones that convince Rei to cry – are given full cut scenes, and can be incredibly emotional.

Almost as impactful are the allies that Rei meets along the way. She’ll end up with a small party of followers that help her tackle the dungeons, and each of those characters has their own emotive and tragic stories to share. I don’t want to give these stories or characters away, because part of the impact of Crystar is how the characterisation can be genuinely surprising, but suffice to say that I was glued to this game because of its powerful, rich, and quite unique characters. They were personalities that I simply was not expecting, and that doesn’t happen often when you play as many JRPGs as I have. 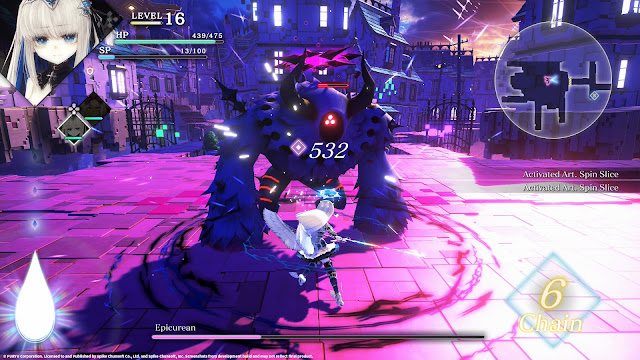 Everything about Crystar is structured around building those characters and sense of sorrow. The soundtrack is beautifully emotive, but rarely overt, instead working quietly in the background to dull the senses and induce a dream-like haze. This approach matches up nicely with the environments with their abstractions and angles that almost call to mind the German expressionist style of early cinema. It couldn’t be a more appropriate form of cinema to crib ideas from, As the genre is defined: “German expressionism was an early twentieth century German art movement that emphasised the artist’s inner feelings or ideas over replicating reality, and was characterised by simplified shapes, bright colours and gestural marks or brushstrokes,” and this certainly applies to the environmental aesthetic of Crystar. For another take, as film critic, Robert Kolker, wrote in Film, Form and Culture:

“A basic premise of Expressionism was that mise-en-scène – the visual space of the film (as well as of fiction, theatrical presentation, and painting) – should express the stressed psychological state of either its main character, or more universally, the culture at large. Edvard Munch’s painting The Scream (1893) best exemplifies this effect, though it actually predates and influenced the Expressionist movement. This painting of a figure on a bridge, standing in front of a violent multicolored sky, hands held up in anxiety and terror, is a dominant image for the twentieth century. It encapsulates the Expressionist desire to make the world a reflection of the interior anguish it has caused.”

I can’t think of a more appropriate comparison – just as The Scream represents and unbridled expression of emotion, so too is Rei’s tears. It might be a different expression of emotion, but the place it comes from is much the same, too – Rei, much like Munch’s figure – is terrified, anxious, and, even when surrounded by allies, alone without Mirai. 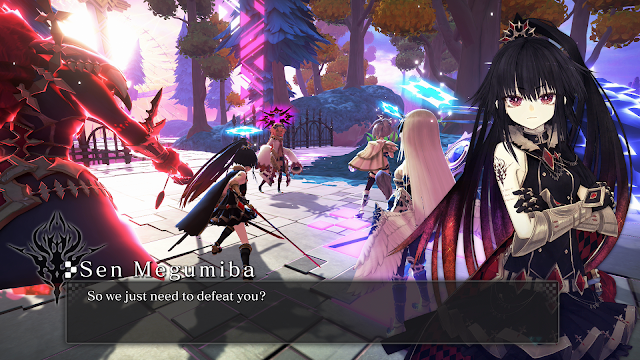 Crystar was published by FuRyu in Japan, and has many of the markings of the kind of project that FuRyu likes to support. As with previous FuRyu titles, including Lost Dimension and The Caligula Effect, Crystar is a game that comes across as literary and philosophical first, with the gameplay being almost secondary to what it wants to achieve. That’s not to say Crystar plays badly, but it’s certainly clear early on what the developer wants you to play for.

Crystar is an action JRPG, in which you control one member of your party at a time (and can swap between them at will). Each character has access to a weak and strong attack, as well as the ability to leap into the air and attack while aerial, and a bevvy of magical abilities that they learn as they level up. Enemies come in groups, and while each individual enemy is quite easy to defeat (not least because they have a habit of running around and completely ignoring your characters), as groups they can be deadly, as the groups tend to contain a blend of damage sinks, fast enemies, and ranged shooters, and navigating that hail of attacks and missiles can be challenging.

There are two issues with Crystar’s action, in what is otherwise a perfectly sufficient action game. Firstly, the frequency in which action comes as you explore is intense. Every new “room” you come across has a horde of enemies and, with very little to do in between, it’s combat, combat, combat, combat, combat. It’s not unlike an action version of a roguelike, in fact, but where a roguelike’s combat is turn-based and therefore relaxed, the intensity of action combat doesn’t lend itself well to 20-30 minutes of endless hack-and-slash at a time. It can get tiring and, dare I say, start to feel repetitive. 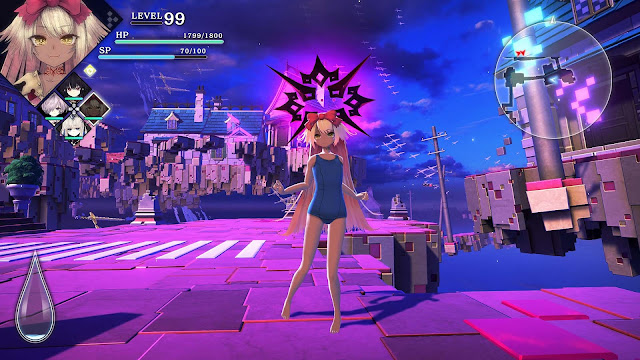 The second issue is the camera, which does not handle enemies coming in from all sides well at all. Panning the camera around to get a look at the enemy behind you is laboriously slow, and there’s no button to quickly re-centre the camera. I can’t recall ever having a character die from this inconvenience, thanks to the difficulty of Crystar being pitched generally quite low, but for a game that relies on the thrill of combat being taking on enemy mobs, the camera system certainly seems like it was developed for one-on-one combat.

These are minor issues, and never got in the way of my focus on the game’s strength, which is its characters and storytelling. I’m always drawn to melancholia as a theme and aesthetic. I always have been, whether it’s the writings on T.S. Eliot and Poe, films from The Cabinet of Dr Caligari through to Blade Runner, the music of Nick Cave, or games like I Am Setsuna and, now, Crystar. That Crystar manages to be so layered and nuanced with that theme makes it all the more impressive. FuRyu continues to be the publisher to watch for anyone who likes their games with a bit of genuine artistic credibility.