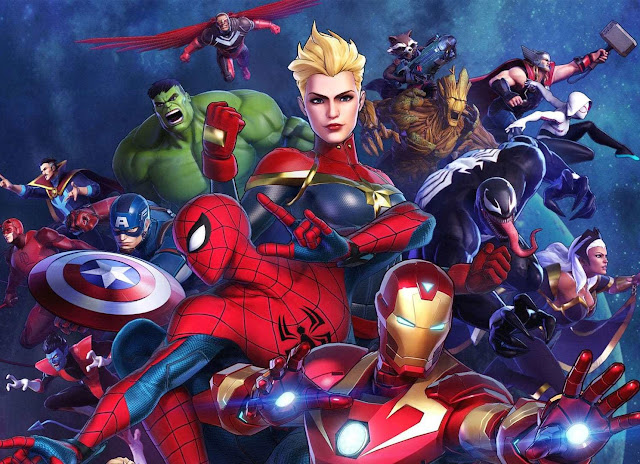 Fan service takes many forms. We often talk about it in terms of lovely ladies and men that strip down to their underthings, but really, that’s just one (admittedly common) example of it. Marvel Ultimate Alliance 3: The Black Order is another kind of fan service. It’s not sexualised to any greater degree than the films are, but it is undoubtedly a very clear and explicit example of fan service nonetheless.

It’s the kind of fan service where you’re meant to leap up and cheer a little every time a character shows up on screen, simply because it’s a character that you like, showing up on screen. Everyone knows Luke Cage is awesome. It doesn’t matter that he’s given the flimsiest, single-sentence justification for actually being there when he makes his big entrance. What’s important is that he is there, and he joins your party, and that’s self-evidently awesome. The developers of Ultimate Alliance 3, Koei Tecmo, are well versed in managing to make every entrance of a new character into an expansive roster somehow exciting – this is what the company does with every new Warriors game after all. In fact, we saw this exact same approach in the character mash-up fan service fantasy Warriors All-Stars. But even in that company, the unfocused frenzy in which you’re thrown new awesome characters to play with in Ultimate Alliance 3 feels like the company wanted to get the narrative over and done with in around an hour. It’s much longer than that – in fact, it’s far too long – but the spirit and structure of a very short game indeed drives it.

That energy suits the Marvel universe anyway. From the comic books themselves, through to a film franchise which is more interested in explosive action and trailer-teaser one liner quotes, there’s very little about Marvel that justifies a deep narrative drive anyway, and Ultimate Alliance rolls with this mass-market contentisation of entertainment well. It can be wildly entertaining, too. When you’re approaching the 10-second “puzzles” that the game throws at you to break up the action with something of a sense of dread because it means the next action sequence is a full ten seconds away, you know you’ve got yourself a game that both has its claws sunk deep into you, and has convinced you to switch the brain off for the duration of it. It’s draining over longer play sessions precisely because it is so shallow, but it’s hard to deny that the developer nailed the brief and delivered something in line with the property. 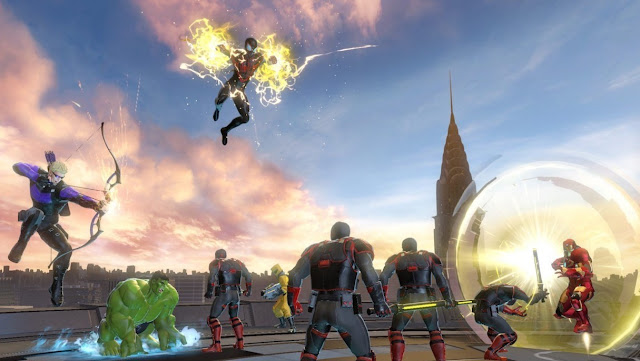 Each character feels nice and different despite having a relatively limited range of available attacks – another trick that Koei’s Warriors property has mastered over many, many iterations. Scarlet Witch (my favourite) is a very different combat experience to Thor, or Venom, or Luke Cage. Some are perhaps more useful than others, and Scarlet Witch herself tends to be a pain to use because her focus on powerful but slow ranged attacks doesn’t gel well with the many instances that she’s fighting in tiny, enclosed environments with enemies on all sides. But then as a team-based game the AI helps out, and since it’s not a competitive experience, the “tiers” of characters isn’t such a big deal. You’ll be able to get through playing with your favourite four heroes, regardless of how useful they turn out to be.

It’s a bit of a dull grind at times, though. Assuming you stick to the same four characters the whole way through you’ll be fine… but there’s not much fun in doing that either. Changing between characters means you need to jump back into earlier levels to get their experience levels up, because each character’s level is tracked separately. The grind is less of an issue with this one, as there’s not much of a narrative to follow, so replaying old levels isn’t really any less interesting than playing through new ones, but regardless of where you’re at, there will be a point where you just need to put the game down, because in the end it’s not working that hard to keep your attention.

Another issue is the lack of customisation over characters. Each character has four special attacks, and those level up in a way that’s not dissimilar to any MOBA that you’ve ever played – you get “points” with each experience level and after a certain number you can level the special attack up a rank, to a maximum of fourth rank. There’s also node-like menu where you can spend the resources you pick up through the levels on power-ups that benefit the entire party. Keeping the customisation this simple makes sense in the context of a multiplayer brawler that is best played at the other end of a slab of beer, but as RPGs go, they don’t get much simpler than this.

Speaking of the multiplayer, it’s a hoot. The action is far too fast to allow for genuine tactics and strategy, but much like the old Gauntlet titles, there’s a visceral joy to teaming up with buddies, each in control of a different Marvel hero, to go around beating up goons. Koei Tecmo has even thrown a little nod to the spirit of companionship by allowing some characters to launch special moves off one another, much like what happens in the movies. The result of these combinations are just a little more damage done to enemies, sadly, because the statistics and combat is so limited that the only way to give players a booster through special attacks is by having them do more raw damage. Still, it’s a clever – and appealing – visual effect both in making multiplayer feel more interactive, and further enhancing the core fan service of the game. Right from the start of the Marvel movie series I have been saying that Koei should make a Marvel Warriors, because the best parts of those movies is seeing how a range of combat specialists, each with their own tricks, could come together to beat back bigger odds. This game is, effectively, that game, and it does work.

Until, that is, it doesn’t. Marvel Ultimate Alliance 3: The Black Order has one major issue, which comes back to haunt it again and again, and always at the worst possible moments: an atrocious camera. I lost count of the number of times I was pulled off camera by something, only to be immediately swamped by enemy attacks that I had no way of avoiding. During boss battles, if an ally falls, you can run up to them and bring them back after a few seconds of healing. Unless, of course, the ally falls down off-screen, at which point you’re floundering around trying to get close enough to them to heal them, the boss does another big attack, and it’s a total party kill. At other times you’ll make the mistake of dodging an enemy by rolling towards the edge of the screen, only to have another enemy come flying out of nowhere to wallop you, and even simple things like lining up ranged attacks can be a pain because the camera is so often placed in exactly the wrong position.

I haven’t played a game that I was otherwise enjoying with a camera so poor that I’ve needed to go and play something else for a while to calm down in generations of consoles. It’s not quite enough to ruin it, but Koei Tecmo hasn’t done The Black Order any benefits with the camera work. 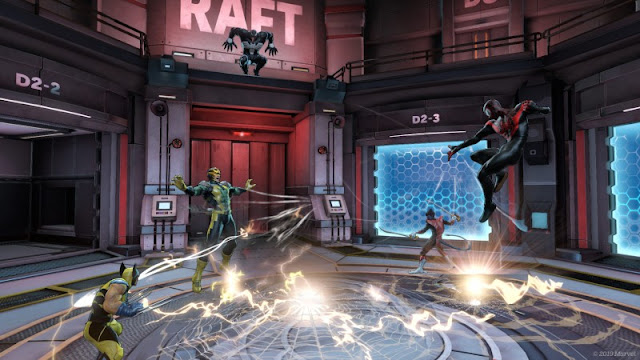 While it’s shallow and has an overly narrow focus, Marvel Ultimate Alliance 3: The Black Order is good fun, and serves as excellent, entertaining fan service for the Marvel faithful. Get a group of friends together, and this is a glorious throwback to the days of couch co-op adventuring, with the development team even throwing in a camera that very nearly ruins the experience. That is true commitment to recapturing the essence of playing games from yesteryear, right there.

The Starcraft: The Saturday Morning Cartoon Edition is a fun new look at a classic

Tears of Avia gets release information