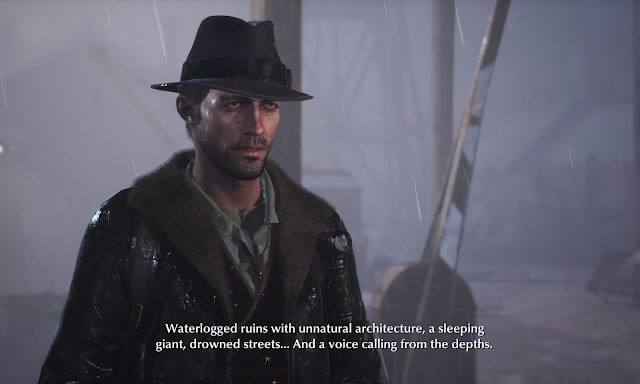 There seems to have been an influx in Lovecraft-themed games released in the past few years, and some really have been exceptional — The Infectious Madness of Doctor Dekker comes to mind, as it takes familiar themes and puts them into a contemporary context. Others, such as last year’s Call of Cthulhu, takes a more direct approach to the topic. The Sinking City is the most recent title based on Lovecraft’s works, imported into the developer’s familiar Sherlock Holmes gameplay to create a new experience. I’ve been excited for it, and nervous for it, and it is interesting to see how my feelings changed (or did not) as I progressed.

If you played last year’s Call of Cthulhu, the beginning of The Sinking City will be familiar: during the 1920s, a private detective arrives on an island to investigate missing persons while also seeking the truth behind his own horrific visions. That is, of course, a common theme to Lovecraft’s stories – some kind of investigator or academic visits a remote and decrepit space, and then things go to hell for him (it’s always a him). This time around, the PI is Charles Reed and the island is Oakmont.

The game isn’t based on a single Lovecraft story; instead, it borrows from many titles, and introduces some of its own ideas, but the three main stories that you can draw references to are Dagon, Call of Cthulhu, and The Shadow Over Innsmouth. For whatever reason, one of the more original elements Frogmouth introduced was to over-exaggerate Lovecraft’s racism, and love of describing “degenerates” in animalistic terms. Two of the prominent factions that you’ll see around town are literal monkey-faced and fish-faced, and exaggerated well beyond what even Lovecraft depicted. As Matt described in an opinion piece earlier in the week, it’s sometimes hard to determine whether the game is taking Lovecraft’s racism head-on, or being indulgent of it, but either way, the actual depictions on these characters is far too on-the-nose for its own good. 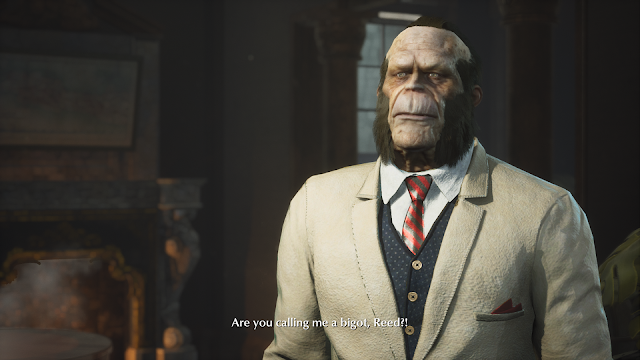 The Sinking City plays like Frogwares’ Sherlock Holmes titles, a series I’ve been familiar with for over a decade, insofar as the main gameplay loop involves travelling to a location, and then scrounging around it for all the evidence you need to stitch the scene together, and push the story forward.

The first case happens as soon as your boat docks, and uses the tutorial to guide you through the steps of an investigation. It limits you to a small area before opening up to the entire island. It’s a short introduction, but it’s all that is needed – once that first case is completed, the controls and functions will be second nature and you’ll have everything that you need to push on through the rest of the game. If anything the developer did itself a disservice by making the game appear more complex than it is in practice. There’s far too much to wade through in reference material if at any point you need to go back and re-jig your memory on something.

Travelling through Oakmont is an experience unto itself. The island is half flooded, so Reed travels by foot or by boat. Thankfully, the boat “follows” you, and is always docked right where you need it to be, so you can hop in and out at any dock without fear of losing it. It’s a better horse than the Red Dead Redemption 2 one, when you think about it. There’s one final type of area that you’ll want to avoid wherever possible – there are “infested” areas that are teeming with enemies. When you need to go into one of those areas you know you’re in for a crappy day. Not least because this isn’t Resident Evil – you’re not exactly equipped like a special tasks soldier, and on top that, this company isn’t doing to be invited to program a Call of Duty game anytime soon – action is not Frogwares’ strength. 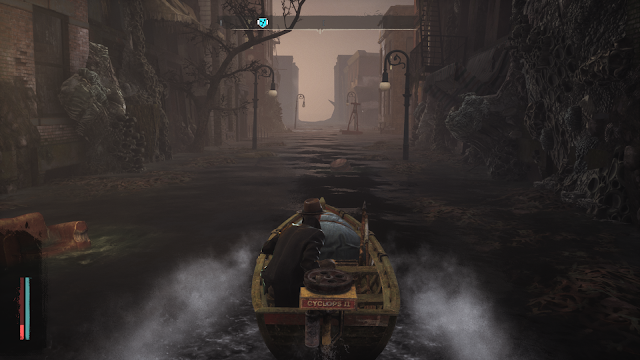 Nobody on the island uses street numbers, the logic being the locals know where everything is and they don’t want newcomers to find their way around. As a result, any directions will use cross streets. Once the location is found, it will be marked on the map. It sounds more difficult than it is, as the casebook contains all the details you need.

The casebook is separated into the main quest and secondary quests. You can switch back and forth at any time, which is perhaps the one open world mechanic that really works in the game. Side quests give the narrative a boost and follow the same investigative techniques as the main quest, just on a smaller scale. Each main quest is directly continued from the last while side quests are more self-contained.

While I have my issues with The Sinking City, the actual investigation parts were near-perfection. Important clues are added to a menu called the “mind map”. You can then use the clues to make connections and deduce conclusions. Unfortunately, because of the open world, travelling between clue locations can make you lose your place in the investigation. Luckily, the casebook is extensive in terms of the information it contains, and you can always find the way in the end. 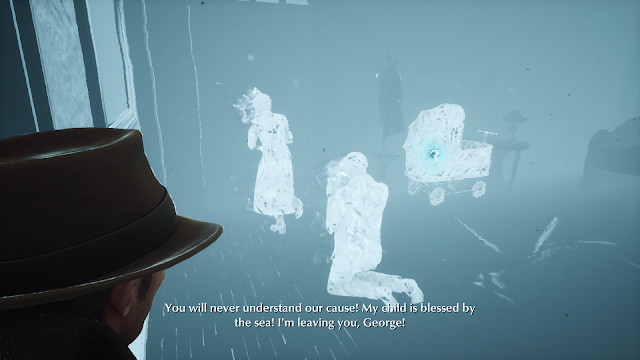 Since the game is supernatural in nature, it only makes sense that Reed has a special ability, called Mind’s Eye. Mind’s Eye is like Reed’s version of psychic visions (different from his monstrous ones, which happens when he’s unconscious). Simply viewing an object can show him the past surrounding it; you know an object has information as the sides of the screen begin to radiate. He is also capable of stepping into the past to piece together event sequences, or to follow someone (or something…) to important evidence.

The open world is, at best, a clunky waste of my time and the developers’ resources. It makes load times take forever. Sometimes the graphics just drop off completely and it can take a minute or two of a black screen to reappear. Most importantly, alternating between walking and boating is painful as it happens often and the boating mechanic is quite frankly annoying. Boats aren’t easy to maneuver at the best of times, and sometimes random objects just fall into its path. Checking the map needs to happen consistently, yet that can take anywhere from 3 to 30 seconds to load. And the fast travel points are useless: I’m over a dozen hours into the game yet I’m yet to use a single one. The biggest issue, however, is simply that the open world does nothing for The Sinking City. This is a linear, narrative-driven, and carefully paced experience that has been shoved into something non-linear and filled with downtime that disrupts the game’s flow and weakens both narrative and atmosphere.

The action/fighting sequences are just as clunky as the open world. Shooting feels jagged and unnatural, with aim assist doing nothing to actually help the process. You can’t even turn your character around without walking in a small circle, making it extremely difficult to reach monsters attacking from behind. It’s oddly old-school about how it handles the combat, and there’s far too much of it, given that the game tries so hard to be authentically Lovecraftian… but Lovecraft never wrote stories about people fighting monsters. 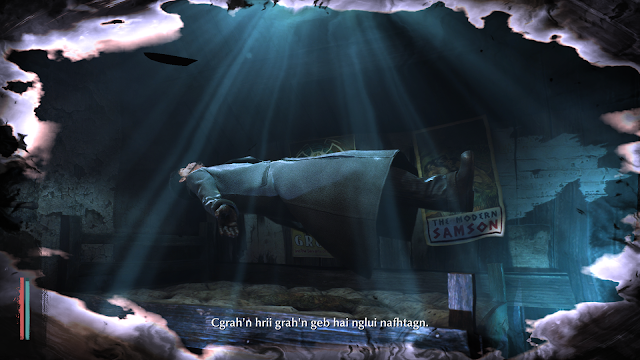 Graphically, The Sinking City is nothing to write home about; it’s comparable to Frogwares’ Sherlock games, which is pleasant enough, though the standard bevvy of bugs and quirks that come with open world games add unintentional comedy that doesn’t help the game’s atmosphere. It is worth mentioned the weird lens flare (or speck of dust) though, as its permanently on-screen and is absolutely maddening. I don’t know why it’s there, it doesn’t exactly add to the atmosphere either. Still, the city itself is an intriguing one to follow around, and the art direction and aesthetics are spot-on for the kind of miserable hovels and cosmic alien imagery that comes with Lovecraft.

The Sinking City is a thoughtful take on the source material, but is nearly destroyed by the poorly-executed open world and actions sequences. The investigations themselves are well-structured and easy to maneuver, but the long treks between, and the downtime that comes with them, is unnecessary. Still, if you’re a Lovecraft fan or a fan of Frogwares’ Sherlock Holmes titles, it’s well worth a play for being an intriguing, and more authentic take on Lovecraft than most manage.