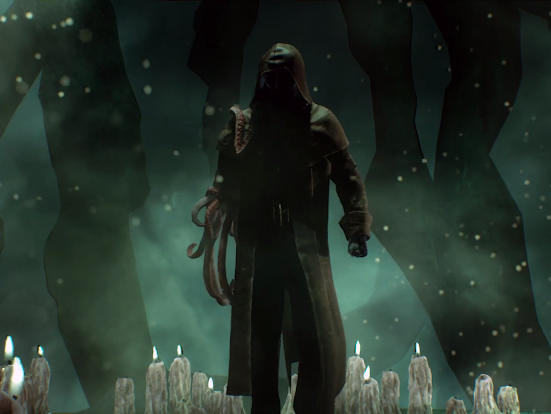 Humans seek knowledge. It’s part of our basic psyche, the yearn to understand what we can’t. Despite any and all scientific advancements, there will always be some part of the universe left unexplored. Call of Cthulhu is the story of a man’s desire for the truth, and his quest through insanity to find it.

While H.P Lovecraft did write a story called “The Call of Cthulhu”, this game is not really based on that story. Rather, it draws on the venerable pen-and-paper RPG from Chaosium that shares the same name. There has been other attempts at bringing Chaosium’s work to the video game format in the past, including a rather well-regarded one by Bethesda about a decade ago (Call of Cthulhu: Dark Corners of the Earth), but I wouldn’t call any particularly successful at getting the specific tone of the pen-and-paper game righ.

Enter Cyanide Studio, the French developer behind a wide range of tabletop adaptations, including Blood Bowl and the recent Space Hulk. I instantly trusted Cyanide with a narrative that has otherwise struggled in the medium. And after spending countless hours with Call of Cthulhu, I’m ready to call it: this is the way to adapt the notoriously difficult traditional pen-and-paper RPG. 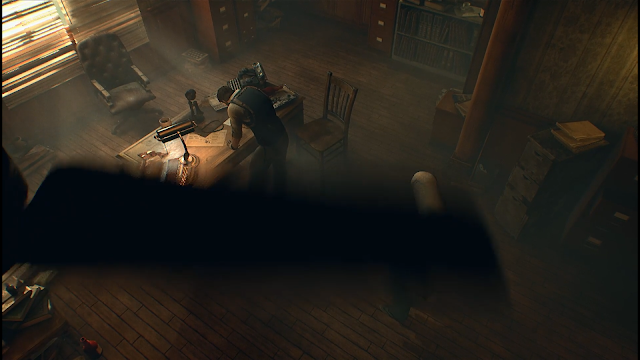 Edward Pierce, a war veteran with a taste for liquor and pills, is barely scraping by as a private detective when he is approached by an odd man asking him to solve the mysterious death of the Hawkins family on Darkwater Island. Pierce is rather shallow as a character, but he seems to be the medium through which the story is told so it works. Instantly drawn to the case, he leaves for the island, which happens to be off the coast of Boston and is accessible only by boat. Like any family, the Hawkins’ have their secrets, even after death. That’s expected. But it’s just the start of Pierce’s delve into the darkness, as it seems like the entire island is filled with layers of crime, secrecy, and roadblocks.

When Pierce is finally able to approach the Hawkins’ mansion — having to jump through hoops with a rather insular local population to even be told where it could be found, let alone to enter — he begins to piece together a story that is far deeper, far more ugly than he could have expected. Ancient Gods. Underground caves. Secret cults. Corrupt officials. It’s all there, but Pierce needs to decipher how each is linked to even begin to understand what really happened to the Hawkins family.

The atmosphere outside of Hawkins Mansion is palpable. The wind whistles, the leaves rustle, and I can practically feel a chill in the air. You explore Darkwater before getting there, which is creepy and foggy in a way that can only be called “Lovecraftian” to begin with, but there’s a palpable change outside the mansion that expands to its interior.

Call of Cthulhu is broken up into chapters, each one pushing Pierce closer to the edge of insanity. It begins to feel as through the shadows have eyes. Each sound must be something coming after you. Hiding spots may as well be portals to Hell. You can’t trust anybody, not even yourself. Even though I was expecting the madness to settle in, the slow decent is so gradual I didn’t notice until I was near rock-bottom.

In Lovecraft’s horror mythos, he writes that artists were affected more than others during a certain time period; the creative types had nightmares and visions, whereas the “salt of the earth” people experienced nothing. This is one of the main threads between the original stories and the way that Chaosium and Cyanide’s interpretation is structured. The matriarch of the Hawkins House, Sarah, was a renowned painter. But as is evident one you enter her home, her paintings aren’t… normal, not the most recent ones. Her sketch pad is filled with what Pierce describes as her “gallery of horrors,” anatomical drawings of what was haunting her during her final days. I do truly believe that artists are often more sensitive to cosmic powers or supernatural occurrences than, well, the salt of the earth. Sarah’s story is believable. Her descent into madness almost makes sense, and that makes me, the player, feel insane for believing in her.

The gameplay is quite straightforward. Pierce is a thinker, not a fighter. He can walk around and interact with highlighted objects or people, but if someone sneaks up and attacks it’s over before a physical altercation has even begun. I do quite like a game with no fighting, but I am less appreciative of one that is so darned difficult. In lieu of fighting, there are times where Pierce has to sneak around in shadows while avoiding enemies and solving environmental puzzles. If an enemy is in front of you, a white marker will appear and turn red if you’ve been spotted; if they get the jump on you, you’re screwed. This leads to a lot of time trying to position Pierce awkwardly in corners so he can peek around and figure out what’s going on without being spotted. Perhaps I’ve been spoiled with an influx of “story” modes in titles that make the game easy (if not remove the gameplay threats completely) so the story becomes the focus, but in Call of Cthulhu, the sneaking got incredibly difficult at times, and it wasn’t optional. It wasn’t bad enough to become frustrating, but slightly too difficult for its own good for people who are there for the story. 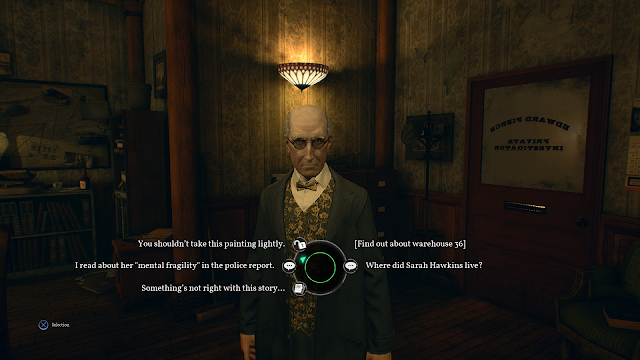 Pierce is incredibly skilled at reconstructing crime scenes, something that comes in handy time and time again. He enters a misty haze of thought and focuses on the item that tells the next part of the story he is trying to uncover. He can practically see people, their movements, their interactions. The best part? It’s extremely clear when he is able to do this, as a message pops up stating how to enter a reconstruction scene. And it’s extremely clear when you’ve done all there is to do, as a similar message pops up indicating how to leave.

Speaking to and questioning other characters is key to discovering the true story of what happened to the Hawkins family. Sometimes, you’re able to choose whether to work together or be a lone wolf. These interactions can be quite in-depth, as asking one question may unearth several more. Other times, they end abruptly and I am left wondering if I misspoke.

Being based on a pen-and-paper game, I was incredibly concerned that I would forget information as the narrative in Call of Cthulhu progresses. It was a completely irrational fear, as Cyanide has created an incredibly deep menu system that functions with ease. I’d argue the most important journal page is Pierce’s character sheet: as he progresses through the game, he earns character points (CP) that you can use to increase skills of your choice. 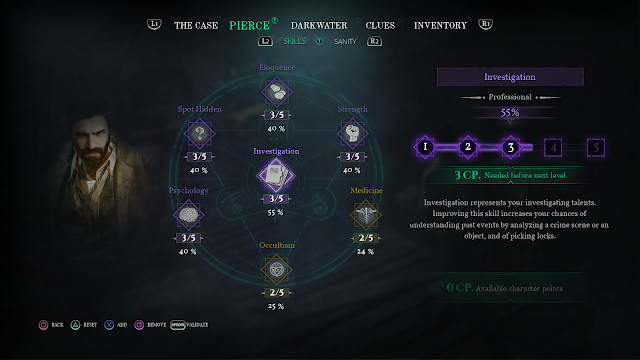 Eloquence, investigation, psychology, spot hidden, and strength can be levelled up by applying CP. I found investigation and spot hidden to be the most useful, as each will reward you with both more physical and verbal clues along the way. The remaining two categories, medicine and occultism, can only be increased by finding specialised material along the way, such as medical books or supernatural symbols painted onto the wall.

The other sections in the journal contains in-depth written information detailing your current chapter, locations you have visited, people you have spoken with/about, and clues you have found along the way. This is how I know I’ll never forget something, as I can easily know which section the information I need may be in. Reminders of what I’m doing in the chapter information has kept me on track several times after I stopped playing in the middle of a task.

Call of Cthulhu is the Cthulhu RPG I never realised I needed in my life. From the moment the atmosphere shifted upon entry to Darkwater, I was hooked. The Cthulhu mythology is presented with obvious appreciation for the source material, crafting a story of cosmic horror and the cults being crazy enough to worship those beings. Aside from some difficulty with sneaking, the game makes the descent into madness… fun? Can one have fun when descending into madness?

“In his house at R’lyeh, dead Cthulhu waits dreaming.”