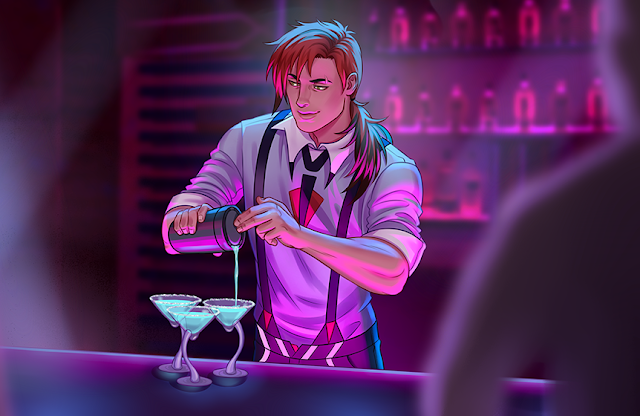 I am a very picky person, about just about everything. I only like certain foods, I only go certain places, I only write certain things. As you can imagine, that makes me very weary of backing something on Kickstarter: it’s something that’s out of my control, and I don’t like that. However, every now and then a game comes along that I just need to talk about, and this time that’s Synthetic Lover.

From Montreal-based studio Knight of Hearts, Synthetic Lover is an adult sci-fi visual novel. Unit 532 is a beachy-looking model companion biot. A disastrous accident leaves him self-aware and emotional. As a biot, he’s booksmart, but lacks the street smarts needed to get by in the real world. 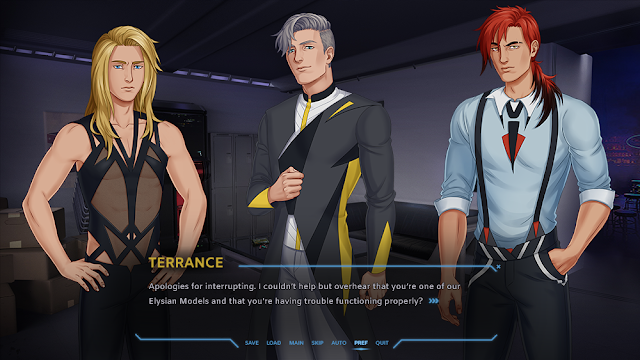 Technically owned by a company called the Dollhouse, Unit 532 is not his own person. Yet somehow he finds himself in the middle of a massive power struggle between corporations, rebels, and the biot black market. Along the way he meets three companions, but each has their own agenda: red-headed Basian is a thief, purple-haired Riko is technical support at the Dollhouse (a biot doctor, if you will), and Terrence is a researcher that seems to legitimately care about biots.

Synthetic Lover is fully voiced and features two in-depth romance routes (at 60,000 words apiece) and three endings. Each time a stretch goal is hit, the scope of the game expands. You can back it until July 23 over on Kickstarter.