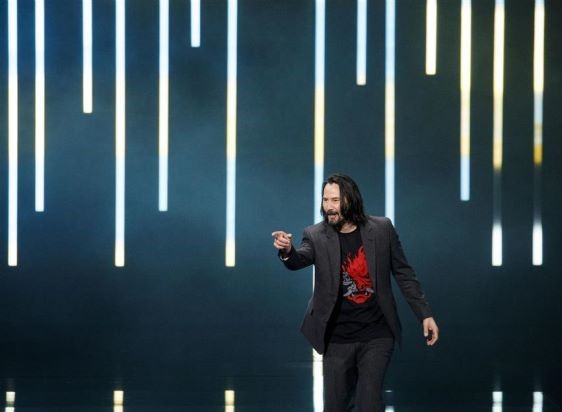 And that’s a wrap! E3 has come, it has gone, and now we know what just about every developer and publisher is focused on for the year ahead. Is there a lot to look forward to? Sure! But let’s drill down into that a little more. Here’s our list of the top ten things to come out of E3 this year. Be sure to let us know your picks in the comments!

Nintendo’s not usually one to sit on a property, but for whatever reason it has been a long time between sips for Animal Crossing fans (yes, we pretend that iOS one and the Wii U side-things didn’t happen). Nintendo made the new Animal Crossing on Switch a big part of its E3 party, and we were instantly charmed all over again. This is going to be something that the entire DDNet team sinks a lot of hours into.

It’s become part of the E3 routine now; every year, one publisher or another gets up on stage, does their big announcement, and then right at the end of the trailer pops up the magical words “available now”. This year was no different, and this year it was Square Enix playing ball, with not one, but two superb “out now, I bet you didn’t expect that coming” moments. The Last Remnant was a game no one assumed was coming to Switch. Now Square Enix’s most niche masterpiece JRPG is there. And then there’s the Mana collection. Ooooooh the Mana collection. Look forward to our review of that next week if you want to see what a love letter really looks like.

We already knew that there was a Stranger Things game on the way, as Netflix looks to broaden the appeal of its properties through video games. At E3 the company pulled out an even more impressive rabbit out of an even bigger hat. The Dark Crystal is a truly beloved flight of fantasy from the childhoods of many of us, and there’s a new Netflix show coming to remind us of why we loved the world and characters. But that’s not the only thing – and here’s what’s really exciting. There’s a tactics JRPG on the way based on that TV show. I don’t think there’s a more beautiful sentence in the English language, or a more perfect marriage than The Dark Crystal and the tactics JRPG genre.

Smash Bros. is pretty popular, of course, and fans from all over the world are in what seems like endless arguments about what DLC characters are on the way. Nintendo put some of those debates to rest this week by announcing two of them. One is really awesome – Dragon Quest’s Hero! He might not have a proper name, but everyone who grew up with Dragon Quest will know exactly who he is. The other character is meh. Banjo of Banjo and Kazooie fame. I know some people have this weird nostalgia for those games, though, so good for them. It still should have been Hatsune Miku though.

We already knew that the Switch was the go-to for older games getting a new lease on life, but the sheer number of ports announced for the Switch was mind boggling. There was horror (Alien: Isolation and The Sinking City), and there was all kinds of retro goodies (SaGa and the aforementioned Mana collection). There was the endlessly delightful Ni No Kuni. And there was The Witcher 3. Oooooh did people lose it over The Witcher 3. The funniest thing was that Bethesda went to a great song-and-dance about porting its terrible mobile Elder Scrolls game to Switch, only for the full Witcher 3 game to be announced – with DLC – just a day later. Take that, Bethesda.

Bloober Team is the new name in narrative, combat-three horror. If Layers of Fear 2 and Observer didn’t convince you on this, then surely the Bloober Team Blair Witch game will. The trailer looks gloriously intense, cinematic, and completely true to the classic film – a film that is remembered as a masterpiece in horror precisely because you never actually see the monster. A game with combat would ruin that theme, but we trust that Bloober Team understands that.

4) EA is slowly ramping up its work with indies

We really want to like EA – it’s a publisher with some hugely talented developers, and properties behind it. And, unlike Activision, every so often the company does do something to try and show that it hasn’t completely lost sight of the fact that video games are also art. This year, EA announced that it has three indie titles on its roadmap, and while we only got to see two of them, they both show strong premise and look lovely. Don’t give up here, EA, you’re doing the right thing.

3) The Romeros are back to show what’s what

John and Brenda Romero are two of the most beloved game developers this industry has ever seen. They’ve both had their share of failures, but the passion that they have for their craft, coupled with their willingness to take creative risks, hone their craft, and make the games they want to make is forever inspiring. Their new game, Empire of Sin, looks superb. It’s XCOM meets prohibition, and the atmosphere of the game is pure Frank Sinatra. This is going to be one very classy tactics strategy games, and mark our words, it will be the best look at the XCOM-like genre since the original XCOM itself.

There’s an infamous story around to explain why we’ve not seen a re-release of Final Fantasy VIII in quite some time, even as Square Enix rolls Final Fantasies VII and IX out over and over again. Basically, Square Enix lost all the code. That’s right – the company managed to wipe, delete, replace, destroy, mangle, and obliterate every copy of the source code for the game. Whether it’s some magic of reverse engineering from retail copies of the game, or the company just hired a really good private detective, Square Enix has sleuthed itself up a working version of Final Fantasy VIII to give the HD re-release treatment too. Finally we’ll be able to enjoy Selphie and Man With The Machine Gun all over again.

At every conference at E3 2019, the rent-a-crowd would scream at every little announcement, as though Hatsune Miku had materialised right in front of them. Bethesda announced that there would be dialogue trees in some add on to some Fallout game, and the crowd absolutely lost it. This announcement for a tiny, standard feature apparently changed their very lives. At the Square Enix show, the screeching almost developed a rhythm, it was that frequent and consistent. Slap that on a CD and ship it off as the next Final Fantasy soundtrack, Square. Ubisoft and Microsoft had exactly the same going on – a crowd so full of such passionate fans that it was like the rapture and they were the first admitted into heaven. It was so good to see, and such a positive reflection on the industry…

Except I’m being sarcastic there. The rent-a-crowd’s performative, ridiculous “excitement” for every tiny bit of content squeezed out through the over-produced trailers and marketing talking points ended up being a pretty good summary of E3. Only not in a good way. E3 was an event filled with plenty of genuinely intriguing announcements for games with plenty of potential, made utterly painful to witness thanks to the corporate, marketing-driven playing up to toxic, unthinking fandom behaviour.

Don’t do that next time, E3, and everyone who presents games there. Make proper announcements that weren’t written by PR teams, and then let people be mature in response to them.