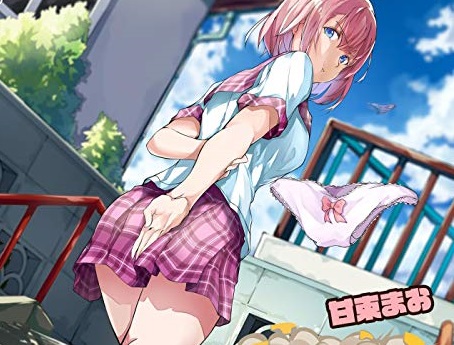 Panty Party is a game in which variations of women’s undergarments battle it out in a no-holds barred deathmatch. Whether your preference is plain white briefs or panties with bear designs printed on them, tentacle panties (which seem rather… impractical to me) through to the mighty striped shimapan (Hatsune Miku’s underwear of choice), Panty Party has got you covered. As a game it’s only workable, but of course, you would have guessed that from the title and premise. This was never going to be Overwatch. If you’re going to buy this one, it’s in the full knowledge that it’s a joke… and it does work, more or less, as an satire on fan service in video games.

Related reading: For an example of a joke game that actually works and delivers something genuinely worthwhile, look at Ace of Seafood. It’s so bad, but so, so good.

In the interest of full disclosure here: for the rest of the review I’m going to be using “panty” as much as I can humanely manage. It’s such a stupid synonym for underwear, but as far as fan service SEO goes, “panty” is the golden chalice, and DDNet could use the boost, so this review is a bit of a gift.

In Panty Party, you’ve got a couple of options on how to play. The “main” mode is the story mode, in which you guide your choice of panty as it beats up other panties across a number of levels, each of which is bookended by a truly nuts cut scene. The story is something about a panty that got really sad and decided to do bad things, while a high school girl who is loves panties discovers that she has the ability to turn into a panty, and so, as the chosen hero, she embarks on a quest to defeat the bad panty. Along the way, she’ll also make friends with a crew of sentient panties along the way. She beats them up, they join her on her quest.

This is some serious panty battling going on here #NintendoSwitch pic.twitter.com/6brfUfQE2H

The game’s plot goes places. Let’s just get that out there from the start. Not only does it have truly eye opening lines like “you are able to transform into a panty. That proves that you are the warrior of love,” which are played for maximum laughs, but the game goes into some incredibly creepy places as well, such as one panty, with a bear print on it, saying “open your eyes! Like all high school girls she is past her expiration date! How can she be a warrior of love?!” It’s worth noting that at no point does the game dip into ecchi or actual fan service territory, and there are no scenes of the human characters wearing panties. However, as obviously satirical as it is, as a none-too-subtle send-up of the ridiculousness of fan service in games, the narrative and concept of Panty Party is so far over the top that it returns full circle and doesn’t actually come across as particularly amusing.

Also some of the panties have male voices and that’s… well, that’s just disturbing when you think about it.

In story mode you start out with just a single panty option for battle, but as you progress you unlock access to the other panties. Each panty has a couple of different abilities broken down as a melee attack, a ranged attack, a powerful (but limited use) range attack, and then a super meter that allows them to temporarily power up their attacks. Impressively, the big roster of panties is valid, with each having distinctive combat abilities that require a different approach to play. There’s a good blend of panties that specialise in area damage, melee, or ranged attacks, and that roster is particularly of relevance when you get to the main part of the game; the multiplayer. 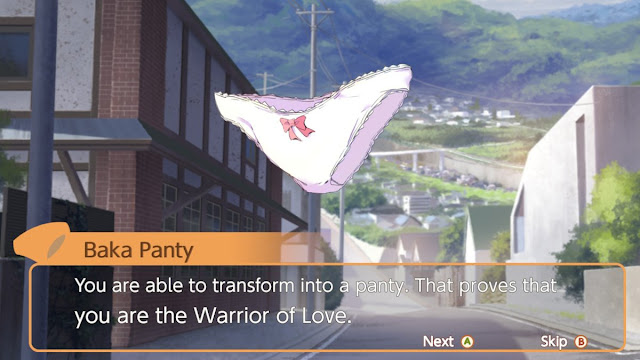 Multiplayer is strictly local, and for up to four players – with AI able to fill any unused player slots. It’s split screen, small-arena action, and feels very much like the old FPSers of the Nintendo 64-era to play. As a fan of the uncomplicated action of deathmatch games from that era, I actually see that as a good thing. Levels have plenty of obstacles to hide behind or building tops to jump on top of to gain an edge in battle, and because the dodge command is so effective, and will allow players to get out of just about anything if they’re responsive enough, deathmatches play out as something of a prodding game of cat-and-mouse. It’s surprisingly tactical and skill-based, and the range of panties available makes for some interesting deathmatch combinations. It’s just as well that there is that level of variation in the mechanics, as there aren’t many game modes for play. You can tweak how long each match goes for, and you can make either every panty for themselves or team deathmatches matches, but there’s no king of the hill or other alternative gameplay modes that we expect in modern multiplayer games. It’s a purely deathmatch affair.

It’s possible to play multiplayer with one Joycon per person, so even the standard Switch setup has two player multiplayer ready to go out of the box. But the big challenge here – the big question to the game’s value, if you will – is whether you’re going to actually find anyone that will want to play Panty Party with you. It’s a game about floating panties. It’s not hentai, as the game’s marketing material is so careful yo make abundantly clear before you even download the thing. Nonetheless, floating underwear battles is still not what I would necessarily consider to be an inherently social activity.

The only other gameplay mode is “arcade,” which is exactly the same as the story mode, only without the story bits in there. You play a handful of battles on your way to the boss, and if you defeat that boss one of the narrative characters will pop up to say something silly within three or four lines of dialogue. Once you’ve unlocked each ending cut scene, you don’t actually need to replay the levels  again to watch the cut scene again – it’s simply unlocked, so with only six bosses and “paths” through the arcade mode, each taking around ten minutes in total, you’ve got no reason to play this again after about an hour. There’s not even online leaderboards, despite the game tracking scores. 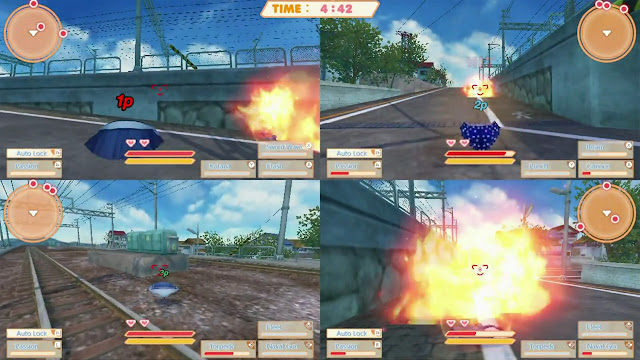 The biggest problem with Panty Party is that lack of content, and I hate that I’m actually saying that, as I usually defend games that are thin in material (hah, what a pun), when that material provides a complete experience. Panty Party actually plays surprisingly well, but it’s hard to shake the feeling that the developers should have done more with it. The combat is strategic and the controls responsive. Camera angles and frame rates are occasionally wayward, but as this isn’t a serious competitive game, and won’t cause you to lose matches (given that everyone else is dealing with the same issues), it’s nothing remotely game breaking. The panties themselves are well animated (there’s a line I never thought I’d actually get to write with a straight face), and while there’s no bodies attached to them to give you the full context of what their movement should mean (i.e. there’s no feet moving on the ground to give you visual perception cues), the gameplay is surprisingly intuitive at all times. The problem is that the developers, having developed a better core than something with the title “Panty Party” ever deserved, pushed the game out before giving players enough to really demonstrate that there’s more to the it than the punchline.

If there was a little more to enhance single player play (or an online multiplayer mode), Panty Party would actually be worthwhile. No one is going to make this part of their local multiplayer playlist, meaning that the game’s value is tied up on two single player modes, each with not more than two hours play time and no replay value. The concept of Panty Party is hilarious, though once you move past making jokes about finally getting your hands on Hatsune Miku’s underwear, the humour of the game doesn’t exactly sustain itself either.

A Japanese novel you should read: Confessions