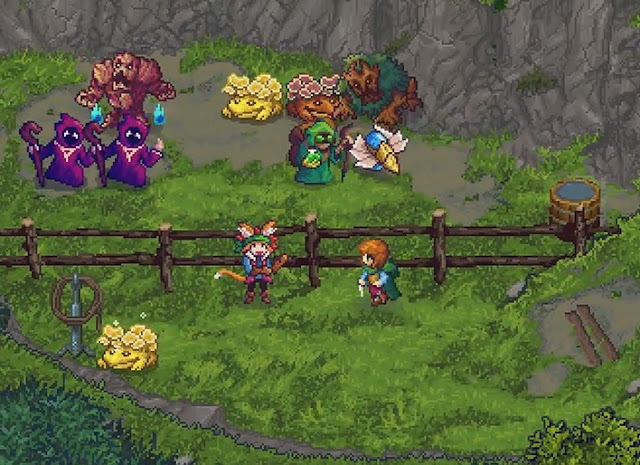 “Roguelikes” are dime a dozen these days. Any game that takes a procedural approach to the level design (i.e. the level is randomised) is proudly broadcast as a roguelike, and it’s easy to understand why; random levels means unlimited replay value, or something. If that’s not a killer selling feature, nothing is.

Tangledeep is a little different. Tangledeep is a genuine roguelike, in the sense that it’s a direct descendent of the classic game that gives the genre its title (Rogue, obviously). It’s not exactly the most playable experience out there, but once you unpack its dense layers, there’s many (many) weeks of intense grinding campaigns in there.

Tangledeep’s biggest problem is that its UI is absolutely terrible. There are multiple menu systems, a convoluted process of button presses to use special abilities and the like, and there are even multiple movement systems; using the D-pad has your avatar wander around as you’d expect from any RPG, but pressing down on the control stick anchors your character in place, giving you a 360-degree movement wheel, and waiting for you to select an angle and then press a button before the character will take a step. 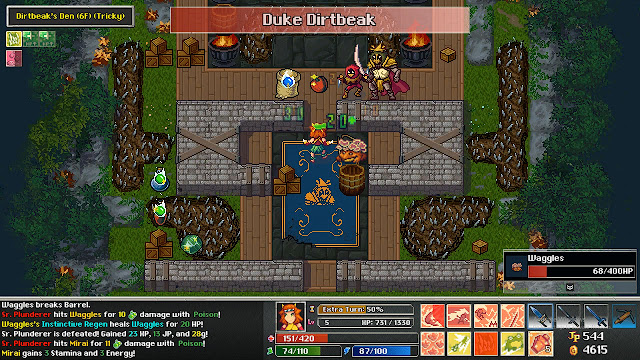 This is all done for a good reason. For example, as Tangledeep is a turn-based game of tactical depth, it’s important to be able to have precise control over direction for special abilities and attacks. The control stick option effectively allows you to confirm a direction before doing something (either moving the character there or attacking whatever’s in the space). The multiple menus help to space out the overload of detail and options, and the only reason that selecting special abilities and the like is clumsy is because there are so many of them to choose between. Tangledeep was initially a PC release, and clearly designed for mouse control. In fairness to the developer, the team has done the best it can to make the game work on a device that doesn’t have a mouse (and touch screen input would have been too finicky in practice).

That being said, there’s still so much going on in Tangledeep that it can be overwhelming, especially when you’re still trying to come to grips with how to play. There’s a pet system that allows you to drag companions into dungeons with you. There’s such a depth to the equipment systems that even figuring out what kind of character you want to play is a process. Tangledeep transitions from bewildering to intriguingly deep after a few hours, and actively encourages players to get creative with it, but it’s a process to get there, and the tutorials and guidance are of limited help.

Finally, Tangledeep is visually clunky. Sprites show a nice level of detail, but lack animation and, when playing in portable mode on the Switch, are too small. Text is also difficult to read, and the retro vibe, while generally pleasant overall, means the font used is painful to read. Tangledeep was clearly made for people who not only remember Rogue, but would still play it if they could, and while that’s admirable, it’s worth emphasising just how inaccessible it all is upfront. 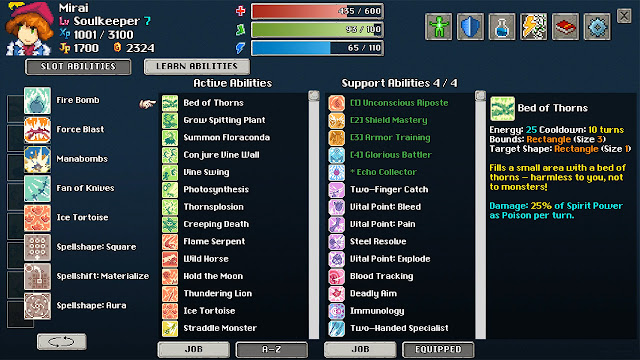 Once you get going with Tangledeep, though, it is so rewarding. It’s difficult, as roguelikes tend to be, and that difficulty escalates rapidly. You might be cruising on one dungeon level only to hit a wall with the next. One small point of difference makes the game much fairer on players than Rogue, which just loved killing them; you’ve got access to an ability that will teleport you back to the hob town at any time, giving you a chance to rest and recoup before tackling the challenges of the dungeon again. This makes character death surprisingly uncommon in Tangledeep, but without sacrificing the difficult battles and grind that players tend to enjoy from the genre.

Exploration’s also a delight. Each individual level is relatively small in scope, but there’s often multiple exits, sub-levels to explore, and side challenges to deal with. You’ll be encouraged to really comb every inch of the dungeons, too, because many of the quests that are given to you from the procedural questing system will ask you to track down specific monsters in specific sub-levels within the dungeon. These quests can easily be skipped or ignored if one doesn’t tickle your fancy, but it’s there to help give context and purpose to the relentless grind, and it achieves that nicely.

There are also plenty of different character types to play with, and enough randomisation that even familiar parts of the adventure can throw up some surprises. Truly, once you get over the initial hump with Tangledeep, you’re looking at a game that you can play over the long term. If nothing else, it’s lovely to know that there are some developers out there that understand what Rogue when creating their “roguelikes.”