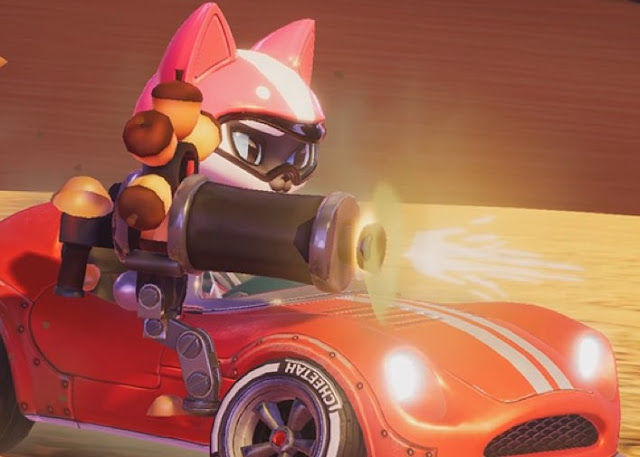 Meow Motors isn’t terrible. I really can’t get over that. I went into this cheap little B-tier kart racer expecting something that reminded me just how bad kart racers can get, but I was quite surprised to find that it’s the other way. It’s no Mario Kart, of course, but Meow Motors, despite having no license (always a sign of a bad kart racer) is more than passably good fun.

WATCH: Our video on Meow Motors

What I like about Meow Motors is that it keeps things simple. Wide roads, clearly defined, big obstacles, and items and weapons that are easy to instantly understand and use, are all things that the developer of Meow Motors absolutely got right. I am also a fan of the unlock system – you’ll start out with only two weapons available, but as you progress through races in the single player, more become available. This allows players to ease into the item system – critical for any kart racer – without feeling like they’re floundering around from the outset.

The game is clearly designed with kids in mind, so the bold colours and safe, cliched environments make design sense. Tracks generally look good, and some of the obstacles that you need to navigate around on those tracks are downright hilarious. On the other hand, the titular cats, of which there are a fair few to unlock as you play, lack for much personality. They’re nicely drawn, but relatively mute while racing. When you look at the Mario Kart titles, it’s the on-track actions and reactions of characters where the personality really shines through, and the developers of Meow Motors seem to have missed that with their title. 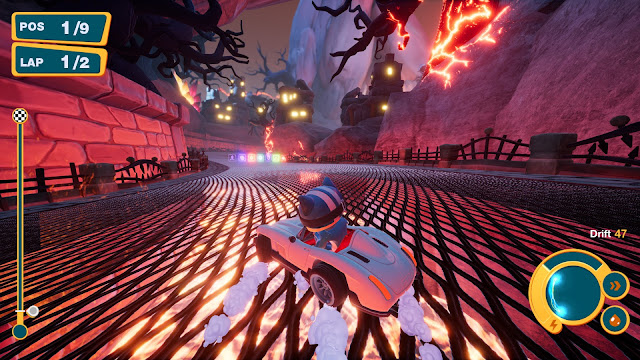 The biggest problem that the game faces, however, is the drift mechanic. The very same thing that elevates Mario Kart from a silly party to game to something in which skill is important, Meow Motors needed to have a good drift mechanic to give experienced players a reason to keep coming back. Sadly the drifting action is too twitchy and irritating to master, and there’s no great rewards for using it – unlike Mario Kart, there’s no huge boost reward for maintaining a long power slide.

For multiplayer, the lack of great feeling with the drift mechanic is not such a problem. The weapons are a bright bunch, and everything’s nicely balanced so that everyone can feel like they’re competitive, regardless of their individual skill levels. The lack of a great drift isn’t even an issue in most of the single player modes, as it’s possible to race competitively with its minimal use. The only time it’s a real problem is in the occasional “drift” level, where your performance and target score is based exclusively on your ability to maintain big drifts, without crashing into walls or other obstacles. Getting the necessary three-star ratings to unlock everything on those levels was frustrating enough that I think the developers lost sight of their “kids-friendly” approach with those mechanics.

Other issues in Meow Motors are minor. The physics engine sometimes struggles to handle kart-to-kart collisions, and I was spun out in crazy and unpredictable directions on the rare occasion when my kart collided with an opponents at an unusual angle. I also missed a proper competition mode. Superficial as they generally are (giving the same points to the same AI racers), I’ve always enjoyed campaigning through a number of races in a row, to try and get the top score overall. There’s a neat sense of drama where you’ve lost a track or two, and you’re needing to score a first in that very final track to secure the overall victory. That is how racing works in the real world, after all. With Meow Motors, you’re simply given a few different tracks to try and earn stars on. Earn enough stars and the next set of tracks will open up to you. It’s too “mobile gaming” for my liking. 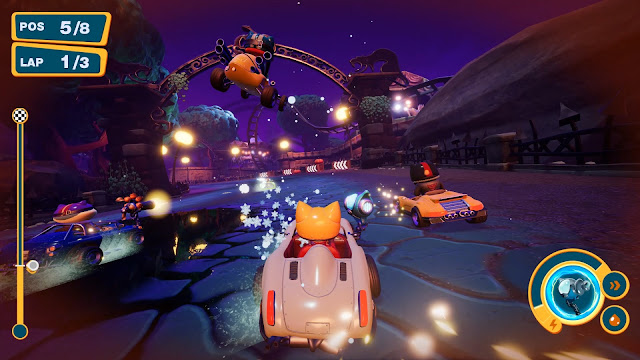 Finally, the AI also has some of the worst “rubber banding” I’ve ever seen. Rubber banding is, of course, a common issue in kart racers, and for the uninitiated, it refers to the AI always managing to sit just behind your kart, even if you’re cruising around well enough to win a race. Perform poorly, and the AI sits back and gives you every chance to catch up. Perform well, then even on the easiest level the AI will be sitting just behind, and a single mistake will drop you back down the pack. This issue is compounded by the weapons being harder to avoid in Meow Motors, and being pounded by items to watch a straightforward victory slip away is about the only thing that can test my love of kart racers, despite being common to every damn one of them (including Mario Kart itself).

Related reading: The best alternative for a kart racer on PlayStation 4 at the moment is All-Star Fruit Racer. Our review

Meow Motors has its issues, but overall, it gets away with it all. It’s a bright, colourful, charming and cheap little kart racer that kids can enjoy, and people who never seem to tire of kart racers will have a compulsive need to buy and mess around with. As we wait for the PlayStation 4 to finally have a great kart racer (Crash Team Racing is on its way), Meow Motors is nothing to cough up a hairball over.

As expected, a new Pokémon title was announced during today’s Nintendo Direct – here’s what you need to know about Sword & Shield!