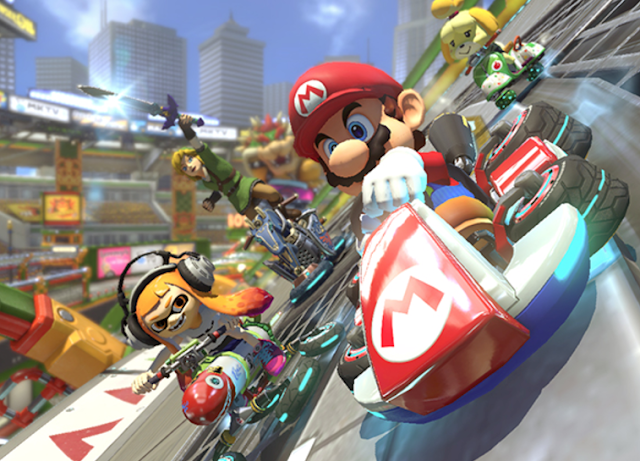 Thanks to substantial DLC releases, Mario Kart 8 on the Wii U went from being a game with plenty of content, to one with an overload of it. Mario Kart 8 Deluxe on the Nintendo Switch has all of that, plus the return of the battle mode (which should never have left), and while it won’t be a new game as such for the people who actually bought a Wii U (we’re a special club), having this game on a portable console is reason enough to buy it all over again.

Most people out there who play games with any kind of regularity surely know what Mario Kart is by now. For those that don’t: Mario Kart is Nintendo’s long-running racing franchise that takes characters from Nintendo franchises, and pits them against one another. Far from being a serious simulation, Mario Kart titles are all about arcade action, and have an overwhelming focus on the items that you can pick up around each course. These items range from banana peels (which can be left on the track to spin a kart out), the famous shell projectiles (which spin cars out), mushrooms (which give your character a short term speed boost), and the invincibility star (which speeds your character up and spins out other karts if they bump into him/her).

That Mario Kart 101 lesson now out of the way; none of the fundamentals of Mario Kart 8 have been changed in the Deluxe version. On the one hand, this is a good thing. The game controls so slickly, and speeding around each track is a real joy in motion. But on the other, Mario Kart 8 has some irritants that had me eventually give up on the original Wii U game, and those haven’t been resolved. It’s mostly the items. Mario Kart’s habit of giving players at the back of the pack better times means that, at times, the player at the front will be peppered by lightning bolts (which shrink the character and slow them down), red shells (which are homing, and nearly impossible to dodge), and blue shells (which are actually impossible to dodge, except with a very specific defensive item). It’s simply not fun to have raced hard to be in the lead, only to be walloped by a series of items that pushes you back down the pack. Skill does make you a generally better racer, but there will be times where bad luck will steal victories that you really deserved, and that’s annoying. 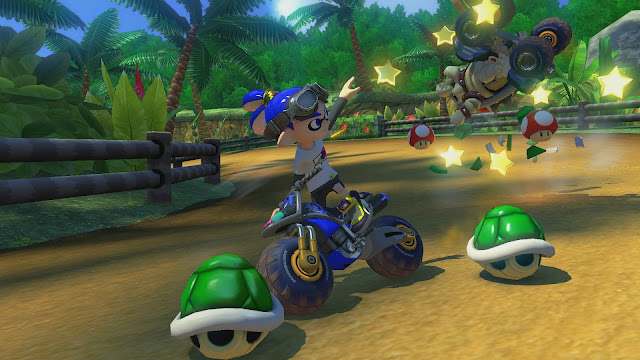 I’m also not a big fan of some of the gimmicky elements that Nintendo has thrown into recent Mario Karts. Mario Kart 8 gave us some downright weird vertical sections of track where your kart will turn into a hover car to drive across. It’s visually impressive, but adds nothing to the core racing. It’s things like this that have me concerned for the ongoing future of the series; rather than fix the fundamental issues that have crept into Mario Kart with that damn overload of weapons, Nintendo is instead trying to distract us with gimmicky stuff that doesn’t add to the overall package.

As a result of all of the above, I got generally tired of the online racing in Mario Kart 8, and I don’t see myself playing too much with this version, either. There’s more than enough in the single player game to keep me entertained on train rides for some time to come, with a dozen cups to work through, on more difficulty levels than I’ll be able to push through any time soon. There’s also the local multiplayer, which will always be fun when people are around. I’ve got no doubt that I’ll get my money’s worth with Mario Kart 8 Deluxe, but it’s just not balanced well enough to be a competitive experience.

All of the above applies only to the races, though. Things are more than a little different when it comes to the (returned) battle mode. Oh dear God do I love that battle mode. Featuring a couple of classic battle mode levels from previous games, and a handful of new ones, this is one chaotic free-for-all game where the randomness of items doesn’t matter so much, because you’re not aiming to get to a finishing line. Here, raw control over your kart, knowing how to effectively use items, and good twitch reactions is what will get you through. It is eminently more fair, and makes for an experience that I can see myself playing for a much greater length of time. 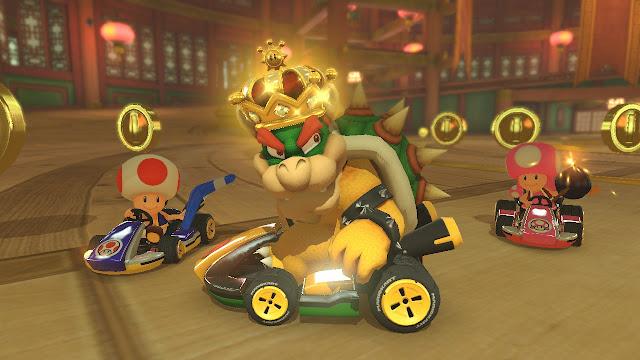 On the Nintendo Switch, Mario 8 looks gorgeous. The Switch’s screen is just big enough to drink in the details, and while the action can get hectic, you’ll never struggle to understand what’s going on on the screen. As a nice presentational touch, there are more characters in this game than any Mario Kart before. Where Mario Kart was once restricted to Mario characters, between the DLC on the Wii U release of this game, and the additions for the new title, there’s also a large number of characters from the Zelda, Animal Crossing, and Splatoon series’. These characters are largely superficial and the game wouldn’t lack if they weren’t there, but the extra variety is welcome nonetheless.

Related reading: On why Super Mario Kart remains the best Mario Kart of all.

That goes for the tracks, too. Where Mario Kart tracks have traditionally been modeled after Bowser’s Castle, Luigi’s Haunted Mansion, and Peach’s Castle, there’s now also tracks based the likes of Zelda and Animal Crossing, and these levels are real masterpieces. If Nintendo wanted to prove that Mario Kart can work with franchises beyond its core Mario IP, the effort that has gone into designing intricate tracks that really highlight what we love about their respective franchises is exactly what it needed to do.

There’s not too much more that can be said about Mario Kart 8 Deluxe. It is effectively a “remaster” from the Wii U original to the Nintendo Switch. The extra content is great, and the addition of the battle mode back into the game is the masterstroke; I do believe that a sizable number of people will spend more time playing that than the racing game itself. As Nintendo’s second big release on the Switch following on from The Legend of Zelda: Breath of the Wild, I have no trouble believing that this will solidify the console’s rapidly-growing reputation of offering far more than people thought it would prior to launch. It might be a flawed experience, but that’s almost irrelevant when you consider just how much of it there really is on offer. This is how you do a “HD remaster”.