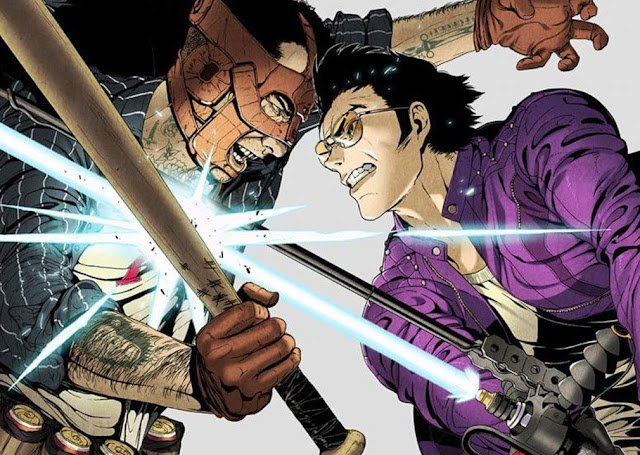 Travis Strikes Again is quite clearly a vanity project for the endlessly eclectic Goichi Suda. It was his opportunity to indulge his love of retro games, indie game development, and Devolver Digital (we all know there’s a collaboration project coming up; just announce it already). It’s a messy game in a lot of ways, but between the in-humour, the breaks of the fourth wall, and the unrestrained energy and attitude, it’s also a game that’s impossible not to love.

The basic idea behind Travis Strikes Again is that Travis Touchdown, the assassin anti-hero of the No More Heroes series, has been drawn into a world of videogames, which he needs to experience… because he does. That’s not really the important part of the narrative though. Because Travis Strikes Again is structured around a giving players a collection of “retro games” to experience, the smaller vignettes around those come across as more important than the overarching narrative, and those vignettes are as much a conversation between Goichi Suda, through his avatar in Travis, and the video games that he grew up playing. When Travis says to “Electro Triple Star” – the first boss in the game, “you’re a video game superstar! And my hero!” it’s Suda waxing nostalgic about his own experience with games growing up. The ease in which the game shifts between old text-based games through to 80’s-style FMV video, and everything in-between, shows that Suda must have spent a lot of time playing games in his youth.

It’s a messy story, told messily. The lack of cohesion and consistency from one scene to the next, one event after another, does lead to the storytelling feel underdeveloped at times. There’s also plenty of aggressive, Deadpool-like breaking of the fourth wall, which the game gleefully acknowledges in one scene with “just to avoid any misunderstanding, this thing with me talking to myself over here? This isn’t a ripoff of that pervert ‘Deadpole’ or whatever his name is!” I’m all for breaking the fourth wall, but it’s an incredibly difficult narrative technique to get right, and too easily comes across as crass and throwaway in a bid to illicit cheap laughs, rather than act as the deconstructing technique that it is when done well. Deadpool itself sits on the cheap and crass side of things, and Travis Strikes Again takes that another step further. 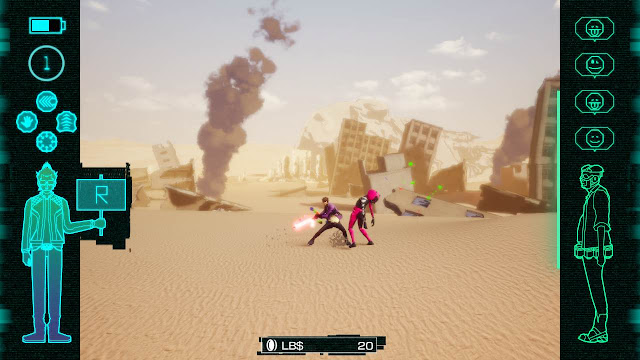 But then, that’s the entire M.O. of Goichi Suda. His games are so willfully, aggressively nonsense in their punk and pop culture tone and aesthetics that they somehow spin full circle to become both charming and clever. What benefits Suda’s games – and this is certainly true of Travis Strikes Again – is that the aesthetics are so perfectly spot-on for the kind of “street surrealism” that permeates through dialogue and narrative. Whether it’s the kaleidoscopic tunnels of colour contrasting immediately with a dry depiction of 80’s suburbia, or a random appearance of a ramen street cart, immediately followed with a naked Travis popping into existence in a homage to the classic Terminator films of the 80’s, Suda rhythmic juxtaposition of an endless parade of pastiches that have no role being set against one another creates and carries that sense of deep surrealism that comes with almost all of his work… including Travis Strikes Again.

Initially, it comes across as random to the point of nonsense, but I think there’s a distinct rhyme and reason to Suda’s work. There’s a character – Buxtra – who pops up from time to time to share “grandad words of wisdom,” that range from ruing the loss of Japanese culture (“Did you know? Japanese people eat cake on Christmas. It’s a weird, mysterious tradition. Why don’t Japanese people eat Japanese sweets?”) through to the kind of good-advice mantras that you might expect a Japanese grandfather to say (“Do what you’re left today tomorrow. Do what you leave tomorrow the day after tomorrow. But the day after tomorrow, stay up all night.”). The nostalgia inherent in these ‘granddad-isms’ mirrors the nostalgic tone of the game, and the sense of nostalgia for, perhaps, Japanese games… and quite possibly Japan itself. It’s a country with a strong sense of nostalgia for its history and culture.

The best way to describe the way Suda’s games play is “energetic.” They’re rarely sustained, lengthy projects, because they’re more interesting in maintaining pace and variety, and Travis Strikes Again certainly fits the bill there. The way that the game shifts from one activity, setting and environment to the next is kinetic. The core action is sound, behaving a little like a top-down action game like Diablo. Hordes of enemies will pop up, and you can use a mixture of Travis’ standard attacks and special abilities to take them down. Plenty of areas also feature environmental hazards to avoid too. There’s not too much thinking through puzzles and such in Travis Strikes Back, but there’s some neat little treasures to track down along the way too. 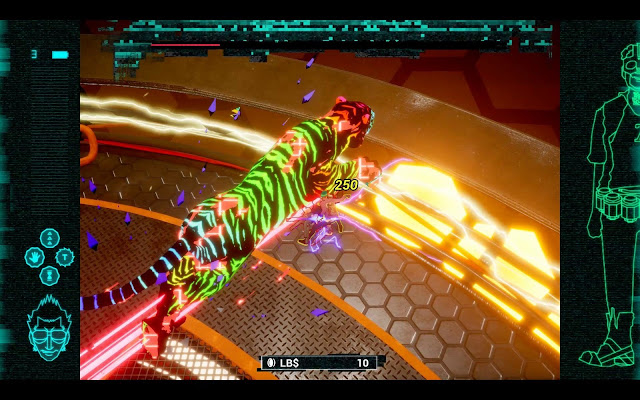 Boss battles are the highlight of any Suda game, and that applies here too. As with all Suda boss battles, they’re multi-staged (and, yes, the game makes fourth wall-breaking references to the “Suda boss style”), and each stage gives the boss wildly different attack patterns, so you’ll need to stay on your toes and thinking throughout. Bosses also take a lot of damage, and deal plenty out in return, so if you like your games with a bit of challenge, you’ll get some of that here.

As with most of Suda’s work, because he’s more concerned with narrative and aesthetics, there are a couple of points of irritation that should have been easy to catch in development. Most significant of which is the iconic beam sword of Travis’. Powered by electricity, there’s a limit to how many times you can use it before you need to recharge it, which, when playing with standard, handheld controls (my preferred way to play, to be sure), requires you click down on the left control stick. The problem is that the same stick also controls movement, and if you move even a little after having clicked down, Travis stops shaking his sword (yes, that is a euphemism that the game plays up to), and starts running around again. When there are enemies around, it’s very, very difficult to be able to find enough space to actually recharge the sword, which drastically cuts Travis’ ability to do damage down.

The other major problem is the Nintendo Switch’s handheld screen. There are points where the perspective pulls back far enough that it becomes very difficult to see what Travis is doing, let alone pick out what enemies he is facing. It happens very infrequently, but for a Nintendo Switch exclusive I would have thought the developers took into account the smaller screen that many people would play on. 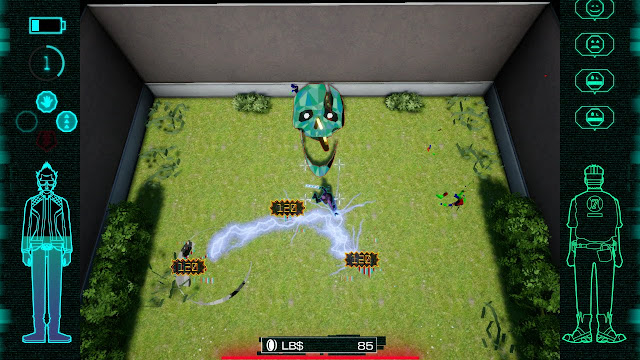 It’s a game worth persevering with, though. Not only because it’s got such a sharp sense of humour, and not just because the variety in play is so strong that you’ll be playing on just to see what could be thrown at you next. Travis Strikes Back is also a love letter to the indie and to creative spirit. It’s conveyed in the way that Travis rambles on about how much he loves Devolver Digital (seriously, just announce that game already), and it’s conveyed through the unlockable shirts that you can pick up for Travis along the way. Each shirt has the logo for one of Suda’s favourite indie games, new and old, on it.

While I stuck with the Hatoful Boyfriend shirt that I got early on, Goichi Suda has a seriously eclectic love of indie games and there are an awful lot of unlockables here. While you can’t really make out the shirt in-game, and will only really see the logo when Travis drops his pants and sits on the toilet (it’s the cut scene that plays when you save the game), their presence in-game speaks wonders to the spirit in which it was developed.

Travis Strikes Back: No More Heroes isn’t the Lollipop Chainsaw remaster that I’ve been begging Goichi Suda to produce each year over the last four TGS’ when I’ve caught up with him, but it’s a stylish, energetic, amusing and surrealistic return to Suda’s most popular character and “world.” Yes, it might have been a vanity project for a guy that wanted to indulge his love for retro and indie games, but I’ve had a cracking time watching Suda show off just how much of a nerd he really is.