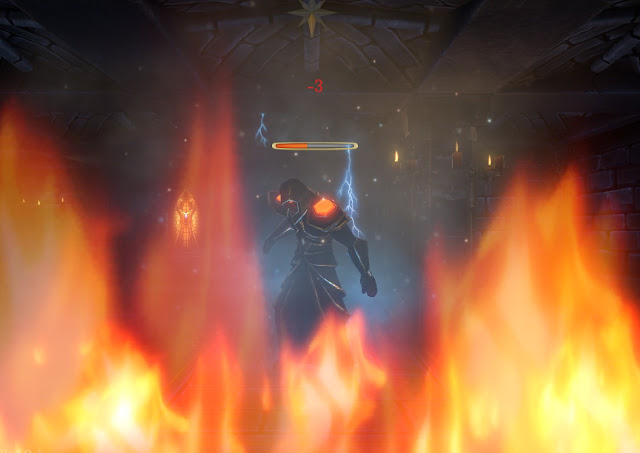 The Keep is a real-time dungeon crawler with a very old-school sensibility to it. It revels in the simplistic, retro B-grade narrative and design that it brings to the table, and is just self-aware enough to have fun with it. It’s the kind of game that can so easily fail by being so earnest that it’s joyless, or so focused on nostalgia that it fails to understand that many of the features of older games are best left in the past. The Keep manages to sidestep these potential downfalls, and hits all the right notes in just about every area. It very nearly gets away with everything that it attempts, but a dismal UI hurts it right at the end.

Stop me if you’ve heard this one before: you’re an intrepid adventurer, who’s wandered into a tower for reasons (fortune-seeking reasons). There you encounter an evil, reclusive wizard, who imprisons you. Your job from there is to escape, battling all the minions and monsters under that wizard’s command. Yes, The Keep really is that cliched. Thankfully, everyone involved in the game also know exactly what it is, and have great fun with it. There’s a fine line between a deliberate B-grade effort, and something that’s just bad, but at no point did I feel that The Keep crossed that particular line. As a big fan of the early era dungeon crawlers, from Wizardry and Might & Magic through to Eye of the Beholder, I found myself chuckling along with each reference to yesteryear (many surprisingly subtle), even as I scoured the environments for tiny visual cues (oddly-placed rocks and walls) for secrets… just like I used to with those classics.

The levels are generally quite nicely designed, too. Not as beautifully as in some of the modern dungeon crawlers out there (Labyrinth or Refrain and Persona Q spring to mind), but The Keep is filled with winding corridors that do a good job of keeping you on your toes as to what’s coming up. Additionally, levels absolutely pile on the traps, including many that are instant-kills, and The Keep desperately wants you to play with the permadeath option turned on. Right from the opening tutorial dungeon level it’s possible for traps and monsters to kill you if you’re not carefully picking your way through the environment, and that core difficulty is a big part of the game’s appeal. As a result, while we’ve certainly seen dungeon crawlers that are larger in scale, the methodical, careful pacing of The Keep does the job in creating an atmosphere of an appropriately deadly dungeon delve. 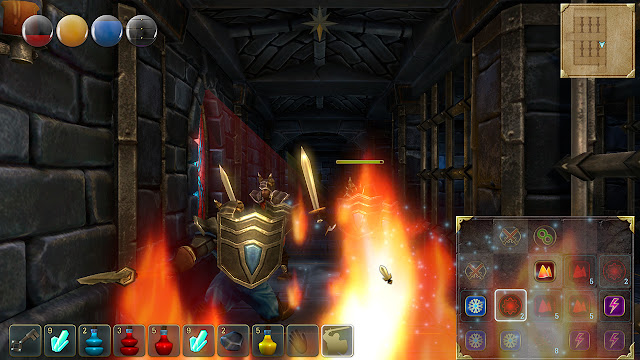 The various enemies that you’ll combat along the way are a delight too. Once again, they’re all drawn firmly from tradition, and that classical approach fits nicely with the very retro, boldly coloured design of the monster models and the environments they prowl around. People who aren’t experienced with RPGs may find some of the enemies more difficult to battle, as The Keep asks you to target weak points without necessarily explaining where they are. By observing enemies and the way they move and attack, you can figure that out, but the frequency in which enemies attack can drain your health scarily quickly while you puzzle over how to defeat them.

Thankfully, The Keep does offer a rather clever way to grind up experience if you feel you’re a little underpowered. At the start of each new dungeon level, you’re given the option to enter a “dream world”, which is a grinder’s paradise, before returning to the “real world” to pick up the dungeon exploring anew. This is a feature that I’d like to see more dungeon crawlers adopt, as most crawlers have a finite number of experience point opportunities available to players in any given level, and there are times where you’ll feel like you want some more experience points to make things a little easier for you.

Sadly, as enjoyable as just about everything in The Keep is, it’s let down with a horrible interface. Originally the game was designed for the Nintendo 3DS, touch screen and all, and while the move to PC allowed the developer to implement mouse controls to allow for much the same experience, on the Nintendo Switch, everything’s been relegated to buttons… and they’re overly complex at that. So for example to attack you need to press a button, aim the attack (high, middle, low), and then “swipe” using the control stick to complete the attack. You’ll need to do that for every single physical attack. Meanwhile, magic uses a “rune board” system, where you’ll place a series of runes on a grid, and then use the right control stick to “draw a line” through a series of them to cast a spell. The idea here is to give you plenty of versatility to arrange runes and then play out the casting of them like a puzzle. It’s a great concept, but it’s again fiddly to work with in the heat of battle, and is further let down by being controlled by the same control stick that looks after character turning. Even deep in the game I was accidentally turning away from my enemies while trying to cast spells on them. 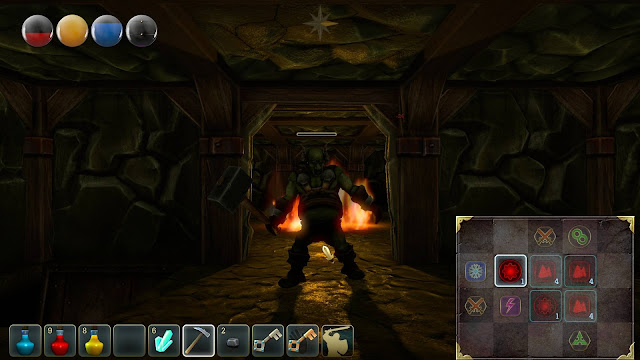 It’s entirely possible to come up with working control systems for real time dungeon crawlers on console. The Nintendo Switch itself has two very good ones in The Heroes of Monkey Tavern and – especially – Hyakki Castle. Unfortunately The Keep was originally designed for a platform with control options that the Nintendo Switch lacks, and it shows.

Despite those struggles, I loved my time with The Keep, though admittedly I’m part of the target demographic that it’s really designed for. The Keep aims to be a nostalgic romp through classically designed dungeon for people who grew up on Wizardry, and have a hankering for those good old days. The developers have done this by going traditional to the point of cliche, but there’s a clever nod and a wink in there acknowledging that RPG stories don’t really work this way any more and that lets everyone in on the joke. If only it played better, but I suspect for a lot of people that will be too difficult to grapple with for its own good.