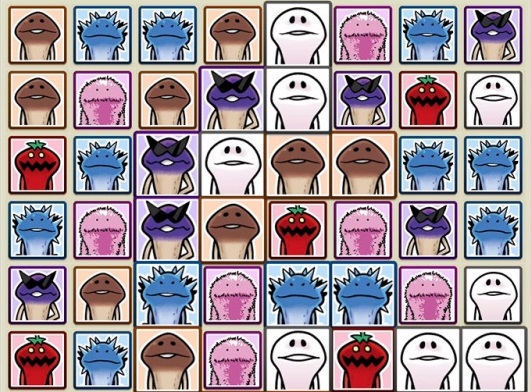 Nameko – “Funghi” in the west – is one of those odd success stories in Japan in which a character design has become so popular that the character has become famous simply for existing. While the popularity that drives Nameko is a little foreign to the west, I am so glad that D3 Publisher localised Funghi Explosion, a match-3 game starring Nameko. It’s absolutely wonderful.

Japan loves its mascot characters. Every town, city and prefecture has a mascot representing it. Every sports team and business does too. If these characters are cute or charming enough, they become a revenue opportunity for their creator, as they can start to produce collectibles and other character-designed goods to sell. DigitallyDownloaded.net’s own mascot, Dee Dee, was designed as a homage/play on that trend. There are even business that exist exclusively to come up with characters and then market them as the product. Characters like Hello Kitty or Rilakkuma are simply built as cute characters to deliver merchandise and other monetisation opportunities back to their creators.

Funghi is a very popular character indeed in Japan. He started out as a cute sidekick to the protagonist of the Touch Detective series on Nintendo DS. From there he became the popular character and has since appeared in anime and games of his own – such as this one. He’s even got his own shop. Near Tokyo Station there’s a strip of “character goods stores”, each themed after one particular character or franchise. There’s a Hello Kitty store, as well as stores dedicated to Rilakkuma, Pokemon, Snoopy, Studio Ghibli and… Funghi. That’s the kind of popularity we’re talking about here.

GOTY. You think I’m joking, but this is a delight <3 #NintendoSwitch pic.twitter.com/qdU2WNwHiO

I’m providing that context to explain why Funghi Explosion exists. In Japan, a character like this has the kind of pull to generate an audience to make a standard match-3 experience popular. In the west, this might seem like an odd release, with a virtual unknown character and theme, but I hope people give it a go, because it’s a tight match-3 puzzler, with a lot of challenge and charm.

Funghi Explosion is most similar to a puzzler that was particularly popular a few years ago on the Nintendo DS called Zoo Keeper. As standard for the genre, you’re presented with a board filled with little icons, and your job is to swap these icons around by moving them horizontally and vertically in order to line up three or more of the same icon in a row. The difference between the likes of Zoo Keeper and Funghi Explosion and something like Candy Crush is that you can continue matching icons while previous matches are disappearing. The key to scoring well in Funghi Explosion is to keep a combo high by making a continuous stream of matches without a pause. Of course, with icons disappearing and the board constantly shuffling that is easier said than done.

Funghi Explosion is a pure time attack affair. Seconds tick down, and each match restores some time. After a certain number of matches you’ll clear the level, which fills the timer all the way, and gives you a new board to play with – occasionally with another new icon introduced to add to the difficulty (the more different icons there are, the harder it is to find matches). Eventually you’ll be unable to keep up, and the timer will run out and giving you a score. Funghi Explosion has a leaderboard, though it’s only offline and really only there to help you keep track of your best performances.

My wife and I are having some intense competition. #NintendoSwitch pic.twitter.com/7CIc5XdeSt

There are a couple of alternative modes. One sets you with a series of ten specific challenges, and after completing all ten, gives you an overall score. There’s also a multiplayer mode, which is nice and simple; it’s the same as the base game, but if you get combos you send “viruses” to your opponent, which prevent them from using specific parts of the play field until they can clear the virus away.

Funghi Explosion is made well. Touch screen is the most comfortable way to play when the Switch is in handheld mode, but with a controller when the console is docked the game is still very manageable. Multiplayer is available with each player holding one Joy-Con, and the easy-to-learn rules and bright presentation actually makes this game an ideal multiplayer game for just about anyone when out and about. I can see my wife (who is also a Funghi fan) and I spending a lot of time playing this while on planes and trains in Japan and around the place.

Really, though, it’s the presentation that will determine whether Funghi Explosion has any kind of longevity. The colourful presentation of Funghi and his buddies is instantly appealing, particularly to existing fans. There’s all the silly sound effects that fans will also immediately recognise. It’s all charming enough that non-fans can still enjoy this, but it’s definitely a game that assumes a certain degree of knowledge. 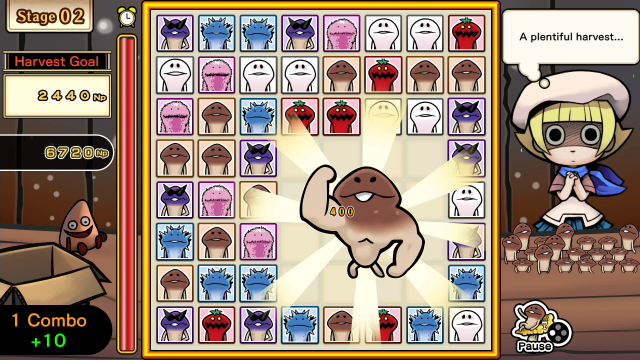 The escalating difficulty from one level to the next means that any given game of Funghi Explosion only lasts for a few minutes. That’s to its benefit. It’s an ideal light pick-up-and-play puzzler that it will be on high rotation on my Switch for quite some time to come. It’s also an excellent example of a “mascot game”, as something of unique cultural and social relevance to Japan.