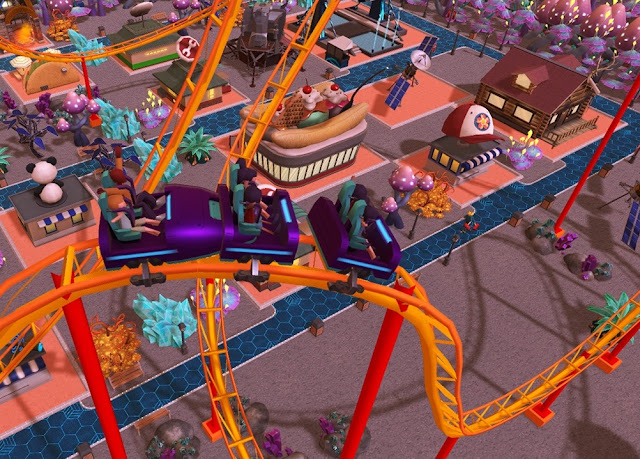 RollerCoaster Tycoon is one of my pet loves. Right back from the release of the original in 1999, it has been a series of pure wish fulfillment; after all, who doesn’t want to build and manage a theme park? It also had a wicked sense of humour… particularly when you built a too-steep rollercoaster, and then watched as it threw people off it, sky high. Talk about a ride.

RollerCoaster Tycoon: Adventures almost looks like it could be a game that lives up to the original at first impressions. Superficially, it’s a delight to design and lay out your theme parks. There’s plenty of rides to choose between, as well as decorative objects, and it’s a great deal of fun to lay out rollercoasters so it passes by fireworks and other stylistic scenic elements. I wish I could wander through my park. I have a great sense of design for these things.

Sadly, “superficial” is where RollerCoaster Tycoon: Adventures starts and stops. You’ll be building rides, hiring janitors, repair people and entertainers, and managing food prices just as you did in the RollerCoaster Tycoon games of old. Unfortunately, it’s also impossible to fail at Adventures. There’s no need to balance a budget, because there’s no way for revenue to decline. There’s no bills to pay. It’s possible to earn money more slowly – and rides “degrade” over time, meaning that you can charge less for people to use them, but it’s quite impossible for the park to go bankrupt. 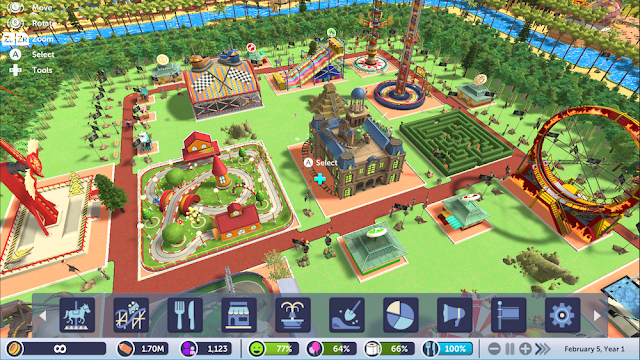 This is because Adventures is based on a mobile title, and while the developers have done the right thing and stripped all the microtransactions out, there remains the fundamental design feature of free-to-play games; you can’t lose. Imagine the complaints if someone spend real money on microtransactions, only to wind up with a “Game Over” screen? No, mobile games need to be structured differently in order to be exclusively rewarding and endlessly playable, and so Adventures likewise only ever rewards.

Progress is earned in the game via research. You can research one new building at a time, and after paying for that research upfront, you simply sit back and wait a while for that building to unlock. Unfortunately, the balance is out here too; you’ll hit a point soon enough where, unless you build multiples of the same building, you’ve going to run out of things to do while you wait for the next unlock. All you can do then is mess around with the scenery and decorations.

There’s no need to really care about the opinions of visitors to your park, since there’s no real consequence if they have some kind of complaint. Not that it’s difficult to keep them happy, because you have to really go out of your way to annoy your guests before they’ll respond. Similarly, where so much of the sharp satire of the original RollerCoaster Tycoon came from the responses of the consumers to their experiences with your rides, this time around, they’re much happier to be sheep herded meekly about the place. 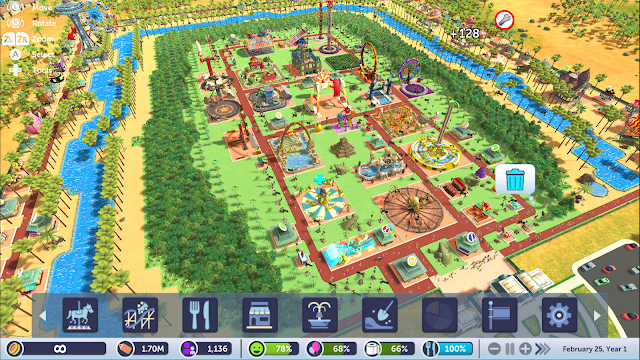 Redeeming Adventures somewhat is the depth of play modes. In addition to the sandbox mode, which for so many of us is the default way to play a simulator, there’s a large number of scenarios to play through. Each of those have specific challenges that need to be completed in order to clear the scenario, and because there’s no real lose state in Adventures, the challenge is in completing the objectives as quickly as possible. Sadly, simulators are meant to be strategic and carefully paced, and “time attack” doesn’t work in that context, so it’s a slog to work through all the scenarios, though the setups for some of them are quite amusing.

Finally, there’s a story career mode, which is as good as Adventures gets, insofar as the gameplay and its relationship to the structure are concerned. Unfortunately, the attached story is anything but memorable, and better examples of the simulation genre don’t need a dedicated story mode at all; the sandbox is enough of an emergent storytelling experience for players to really care about what they’re doing anyway.

RollerCoaster Tycoon: Adventures is pleasant on the eyes, but is in every other way a disappointment. It’s a shallow grind, which challenges none of the player’s management skills, and comes across more as an opportunity to simply decorate a theme park. On a very basic level, that’s appealing enough, because everyone dreams of being a theme park designer. But practically it simply does not equate to a game with any kind of longevity.