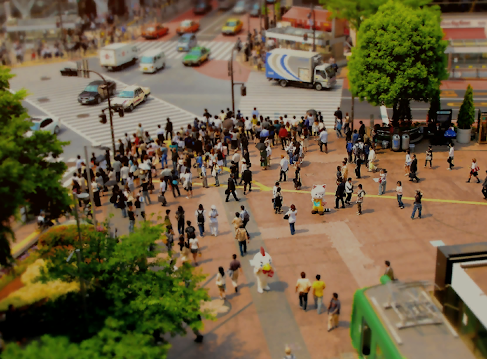 When I think of Spike Chunsoft, I tend picture Danganronpa, or those 3DS Street Pass minigames, and tend to forget about the other amazing games in the publisher’s library. 428: Shibuya Scramble is one of those games, with an original launch on the Wii in 2008 and further releases on PlayStation 3, PlayStation Portable, iOS, and Android. But never in English, which might explain why it completely dropped off my radar until the news it would be released for PC and PlayStation 4. This is my chance! And I’m not going to waste it. Prior to writing this review, I wrapped myself up in blankets, stocked up on nearby water, and dove headfirst into the game.

But first, a note that I’ve kept this review as spoiler-free as possible, only using images from the beginning of the game and not discussing the plot in extreme detail. I came into this with no idea what to expect in the narrative and I’d to extend the same respect to others picking it up for the first time.

My first concern: the game’s age. 428: Shibuya Scramble is now ten years old, but due to its unique blend of visual novel and still photography it doesn’t show that age. It’s a book in game form, with photographs to accompany each scene. You can have it auto-read, a blessing to my right thumb that abhors repetitive motion. Select terms are in a highlighted in a different text colour, indicating it can be selected and the definition read (or viewed, as sometimes there are little videos). You can jump between several people experiencing individual stories as part of the main timeline, and make choices to change the future. 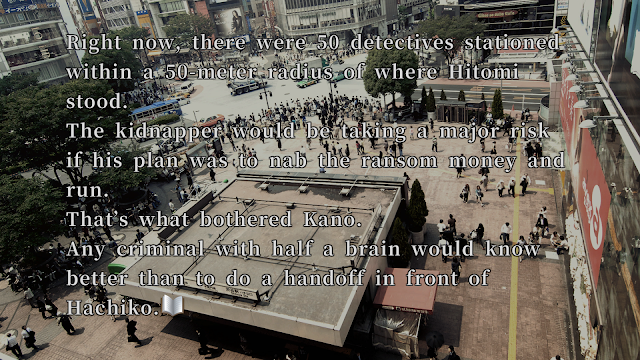 Normally I wouldn’t talk about gameplay right away, but again, it is relevant as the style of the game has made it age with grace.

428: Shibuya Scramble is set in Shibuya, a famous Tokyo neighbourhood and shopper’s paradise, and follows a large cast of characters during a ten-hour time period. It begins with a detective aiding in a kidnapping case and morphs into a complex narrative that requires time-jumping to test new decisions. Right away, it is evident that you’re going to encounter a larger-than-life cast of characters, beginning with your disguise-obsessed partner during that initial stakeout.

Everything, and everyone, is connected in 428: Shibuya Scramble. That man you tripped over could be the missing link to the investigation, or just some poor schmuck caught in the crossfire. One man’s statement could unlock the rest of another’s story despite being blocks apart and having never met. Each new character introduced is a new way to connect the others and begin to make sense of why a girl named Maria was abducted the precious night. 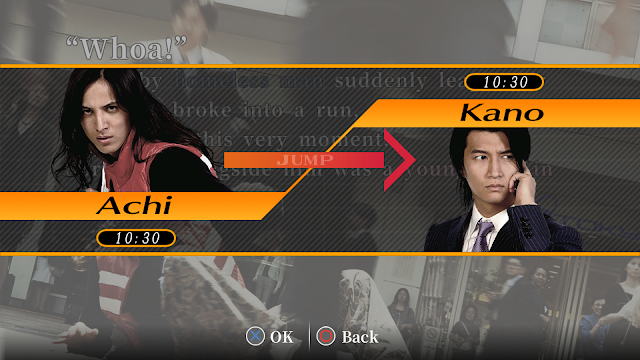 The ability to time travel across characters is an integral game mechanic, and after some guidance you are on your own to figure out who can get you passed locked narratives that pop up from time to time. The game is separated into hours, so you can only impact the hour in which you’re playing. By clearing each character for each hour, you’re able to proceed through the story. While playing, I find myself consistently amazed at the connections between the seemingly separate incidents.

Rare for a game, 428: Shibuya Scramble actually encourages “bad endings.” Bad endings will give you a hint for what needs to be changed to prevent it from occurring; sometimes it involves going back and making a different decision, or sometimes it means choosing another character and playing through their story until the narratives meet.

Also rare for a game, this one makes even the most mundane decisions become life-altering events. Myself and others have often compared games to choose-your-own-adventure novels, and that is what I can most liken to 428. Going back in the timeline is like keeping a finger on the last page you made a questionable decision. 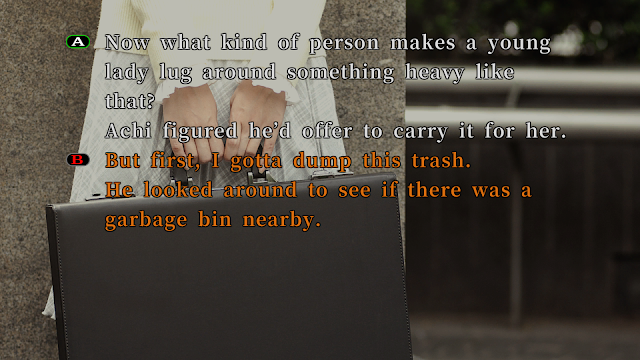 428: Shibuya Scramble is remarkably educational. The highlighted words can bring up definitions, historical and geographical explanations, and information about how the Tokyo Police functions during major criminal events. Sometimes it will tell a character’s story, or show a little related video.

I am not familiar with Japanese detective television shows, but I do brag about being brought up on Law & Order and am quite familiar with North American crime shows. Combining my (limited) knowledge of Japanese scripted television and my (extensive) knowledge of American scripted crime dramas, 428: Shibuya Scramble just feels right. It feels as though it’s the middle of the afternoon and I’m watching a soap opera steeped in organised crime, at the edge of my seat the entire time.

Even through still photos, the actors are completely over-the-top… yet somehow in a completely believable way. You’re with two of the characters from the beginning, Kano and Achi, so they become the easiest to sympathise with. My favourite may be the cop known for his intricate disguises, Sasayama; whether he’s a homeless man begging tourists for money or an anime fan returning from a convention, you’ll always do a double-take when you realise the strange-looking person you’re speaking to is actually someone else on the abduction case. 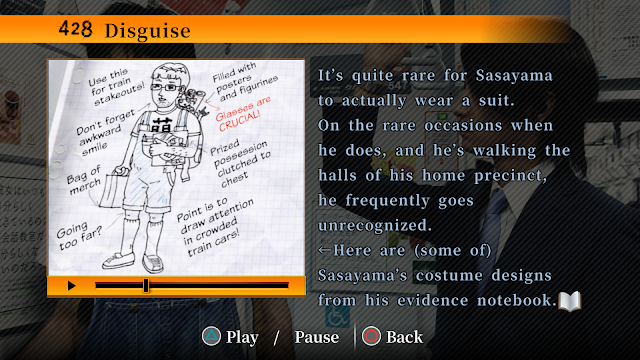 While there is a lot of text on the screen, the music tends to fade into the background. If something happens, the music will increase in tempo and volume, with added effects seemingly pulled from classic detective films. The pop star mentioned repeatedly by name, Aya Kamiki, even performs the theme song for 428: Shibuya Scramble — and released it as a single and a music video!

428: Shibuya Scramble is storytelling via video games at its finest. The multiple parallel stories, the twists and turns, the characters, each is reason enough to pick up this title despite the initial release being a decade ago. It plays with ease, allowing you to completely lose yourself if the story of Maria’s abduction and the ten most important hours spent trying to save her.

There’s a new Peach Ball: Senran Kagura trailer and… it’s out there

Assassin’s Creed is going cute for its latest mobile game