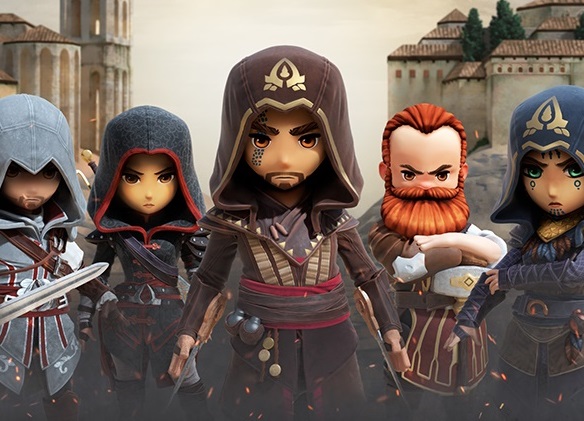 Ubisoft’s Assassin’s Creed has always been known for its efforts to present players with a realistic historical world to explore. Assassin’s Creed Rebellion, however, is throwing all of that out the window.

Rebellion has bobble headed characters and a bright, cartoonish aesthetic. It’s being developed exclusively for mobile platforms, and bills itself as a “strategy RPG.” Of course, we all know that a mobile game means free-to-play and gatcha mechanics, but still, the opportunity to play as a whole bunch of your favourite characters from the “main” series at once will be tempting to many.

An overview of the game, and the trailer, below:

Join Ezio, Aguilar, Shao Jun, and many different Assassins simultaneously for the first time ever!

Build Your Own Brotherhood

– Rediscover the legends of the Assassins Order like never before.
– Team up with more than 40 characters, including legendary ones as well as exclusive brand new characters.
– Train and promote your assassins to the highest ranks to strengthen your Brotherhood forces and defeat the Templars.

– Send your Assassins team on covert missions throughout Spain. Choose the perfect combination of heroes to achieve the objective.
– Develop your own strategy and use your Assassins’ unique skills to infiltrate the Templar strongholds and stop their plans.
– Fight your way through, or apply a more stealthy approach? Choose wisely.


The game releases on November 21.