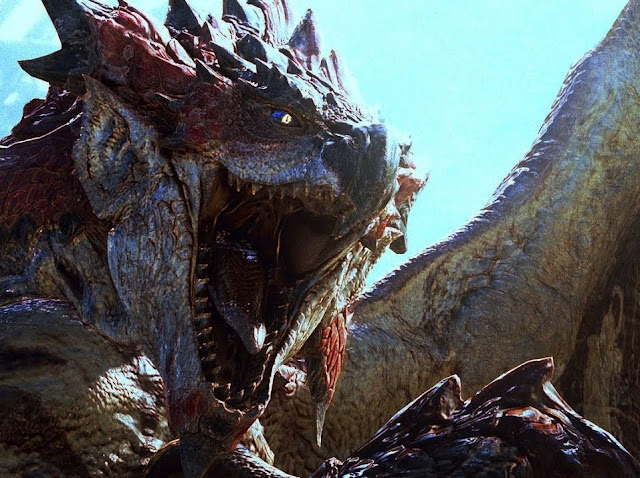 It was a Saturday evening, the weather was fantastic, I was being led by a man dressed as a “hunter”, and about to board a ferry to an island in Sydney Harbour. Two things happened that night, it was the night I met editor-in-chief, Matt, for the first time, and it was also the night where, on Cockatoo Island, an event was being held for a new a game in a little-known franchise – Monster Hunter Tri on the Nintendo Wii. It was the first time I’d ever tried a Monster Hunter game, and the lengthy quests to take down monsters, coupled with the cooperative nature of the game, drew me in instantly.

Related reading: Our review of the last Monster Hunter game on 3DS.

Many Monster Hunter games have been released since that event eight years ago, with most arriving exclusively on Nintendo systems. Now, it is a mammoth franchise worldwide. Monster Hunter Stories proved that the franchise could attract new and younger players, and the amiibo I had to order direct from Japan for that particular game remain the most detailed and incredible amiibo so far. Head to Tokyo Game Show and it’s the Monster Hunter demos that attract the longest lineups, and the crowds at the Monster Hunter merchandise booth never abate.

Monster Hunter World looks to stand somewhere between the serious and hardcore Monster Hunter Tri and 4 games, as well as the more light-hearted Monster Hunter Stories game. While it leans way more towards the former, there is a sense that the game is also going to have a broader appeal this time around, and Monster Hunter World is a game that celebrates the series’ history and takes the franchise into a bold new direction for the future. 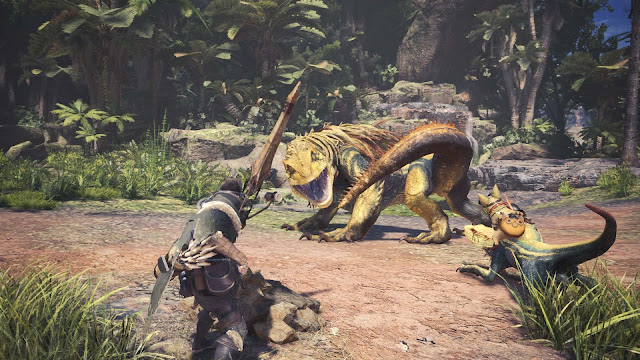 Monster Hunter has often been a game of survival, an action-JRPG that starts the player out with nothing but pathetic armour and weapons. The game demands that the player takes down a number of smaller monsters and harvest them for their body parts, leading to better weapons and armour which in turn allows the ability to hunt down bigger and badder monsters.

Monster Hunter World offers fourteen weapon classes, each having their own strengths and weaknesses. Some weapons are better against certain monsters and so on, meaning that careful planning and consideration is required before almost every single hunt. Taking a sword and shield out to hunt down Monsters with hard, bony skulls is almost useless, but taking a thick club to shatter their bones yields better results.

You hunter is accompanied by a palico, which is essentially a cat that can walk on two legs, it often follows the player around and scavenges items as well as assisting in the take down of monsters. Harvested parts can be used to upgrade the palico’s clothing and weaponry as well, and the longer the game goes, the deeper the bond I felt with my palico. I would protect that darn thing at all costs! 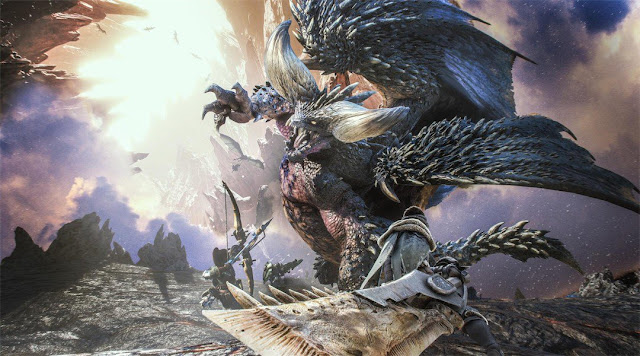 What I am describing thus far about Monster Hunter World may sound rather daunting to someone new to the series, and with over twenty tutorials faced in the first hour, that feeling won’t go away soon, as it is a lot to take in. While the gameplay itself is certainly not dumbed down in any fashion, and neither are the wealth of statistics in the weapons and armour that the game asks players to interpret, the way they are presented to the player has been given an overhaul. Crafting seems a lot easier than it used to, and looting stuff is easier. If you are new to the series, you’ll be running around flailing your weapons at anything that moves for the first few hours until you get to grips with it. Just embrace that learning curve, because despite how steep that learning curve, the rest of the game is your reward for mastering the gameplay.

The narrative comes across rather weak as well, which won’t help hook people in from the outset. Your created character and palico are part of the Fifth Fleet and have been requested to come to another continent to assist in taking down an Elder Dragon that has migrated to the region. Soon a giant monster known as the Zorah Magdaros takes out the ship and the main protagonist is separated from his palico. After some carefully woven tutorials during the search for the palico, it becomes clear that dangerous creatures migrate to the region every ten years, and it becomes the job of your hunter to cull various creatures and try and restore some order and balance to the nature of the region. There’s more in that narrative compared to most other Monster Hunter titles, and mostly serves as an excuse to go out there and hit things until they die, but it’s nice to have a sense of belonging and understanding behind why you’re killing what are creatures doing what comes naturally to them.

The game itself is a lot like Pokémon in a sense that, the narrative serves mostly as a surface level distraction behind the real meat and bones of the game. Once the main quest is completed, the shackles of explicit storytelling are removed and the game becomes more about the emergent story; the quest of hunting down the biggest and baddest animals in the land. Taking down the legendary beasts allow the player to open up new opportunities to upgrade their weapons and armour using the unique body parts. 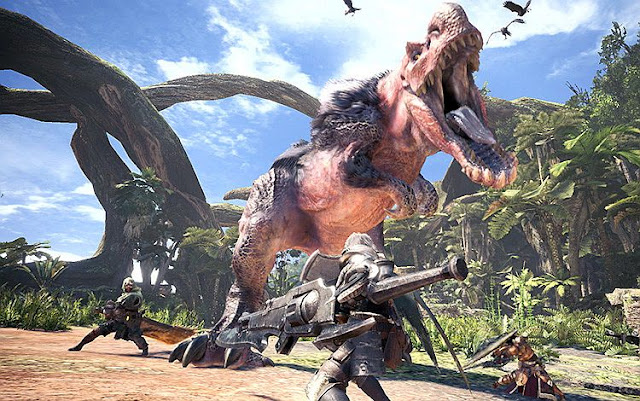 There are so many armour options this time around. Many of them are designed to be worn while fighting specific monsters. I was completely destroyed by the fire breathing Anjanath, but I found I had enough to create fire resistant armour, and the fight all of a sudden became a breeze. It all comes down to making those careful choices before leaving for a hunt. All of a sudden, you’ll find yourself with a cavalcade of weapons and armour designed to maim and disembowel almost any kind of monster.

I also love the introduction of Scoutflies in Monster Hunter World. It makes tracking your next objective marker oh so much easier. Rather than running around the different zones hoping the monster is lurking there, you can now instead use the Scoutflies to find trackable footprints or other markings left by the monster, before the Scoutflies catch the scent of the monster, allowing you to go straight to it and make your attempt to take it down.

As you track monsters and take them down, you’ll learn more about the monster itself. The more time you spend around the monster and break lootable items from it, the more information you’ll be given in your Hunter’s Notes. These notes include telling what parts are harvestable from a monster, what they are weak to and more. Sometimes this can be the difference between life and death, gathering the information, realising that the hunter is grossly underprepared, and coming back again with the appropriate arsenal. 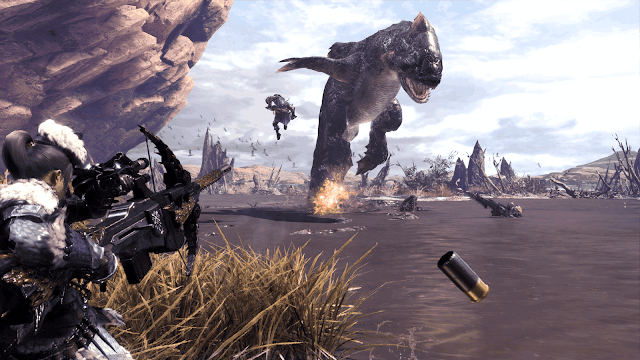 Many of the world’s creatures behave as you would expect these types of creatures to. There are food chains in place, sleeker, smaller monsters hunt their prey in packs, they will give the hunter warning growls to stay away. Some know that they are the king of their territory and decide that everything is their lunch and attack at will.

Monster Hunter is usually done best in multiplayer, a group of hunters will be better equipped to take down larger enemies. Multiplayer can occur during both side quests and the main quests which does come as a double-edged sword. Obviously, you want to be in a team of players who know what they’re doing, otherwise the experience won’t be enjoyable at all. On the other hand, the game takes an online only approach, so even when playing alone, the game can’t be paused whatsoever. This proved extremely frustrating as I had driven a monster back to its home and had the opportunity to finish it off, only for me to receive an important call, and the lack of ability to pause the game meant that I was finished off pretty handily, and had to start the hunt that I’d been on for half an hour over again.

This is quite simply the best Monster Hunter game I have ever played. After being so used to playing the series on the 3DS in recent years, it has been refreshing to play Monster Hunter again on the big screen. Long, enduring hunts are much more calming sitting back in my couch rather than hunched over my tiny screens. Monster Hunter World feels like a perfect blend of a game that can keep its most ardent fans happy due to the complex nature, while opening itself up just a crack to allow a new audience to give the series a go for themselves. I suggest only approaching this game if a full-commitment can be made, as it is an intensely consuming game that demands attention.

Review: A Case of Distrust (PC)